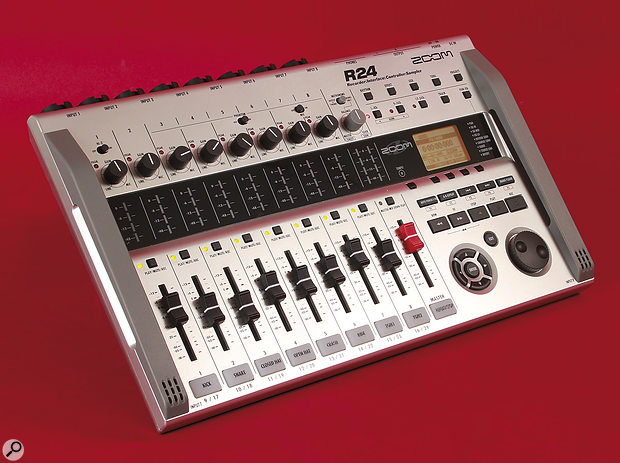 Zoom have launched a sibling for their R16, adding a further eight tracks and some neat loop‑sampling and rhythm‑track features.

The hardest thing about reviewing Zoom products is finding the space to document all their features. The R24, reviewed here, is a case in point: it functions as a 24‑track recorder, complete with mixing tools; it can be used as a multi‑channel computer audio interface and control surface; and it includes loop‑sampling facilities, drum samples and a sequencer for constructing rhythm tracks. It even has a pair of built‑in mics of its own, for when you have no external ones to hand. Other manufacturers must wonder how Zoom manage to include so much functionality without compromising quality or charging a fortune! Fortunately, many of the R24's features were covered in our review of its predecessor, the R16, and I'd recommend checking out that review (in SOS September 2009 or at /sos/sep09/articles/zoomr16.htm) in addition to reading this one.

Both the R16 and R24 have evolved from Zoom's earlier hard‑disk multitrack recorders, which were essentially stand‑alone products providing an affordable way to record, mix, master and burn CDs, functioning as all‑in‑one portable alternatives to Windows or Apple‑based DAW systems. Few people now seem to want to work exclusively using hardware, so products like the R24 have taken on extra functionality, allowing them to work alongside computers, instead of acting as an alternative. If you're curious to know about the history, Zoom's first hybrid recorder/control surface was the HD16, reviewed in SOS August 2007 (/sos/aug07/articles/zoom_hd16.htm), though unlike the R16/24, this was not also an interface.

But what about the present? As I implied earlier, the R24 is at heart an R16 with added features and various modifications. The most obvious change is the addition of a further bank of eight recording tracks (making a total of 24), which Zoom have accommodated by altering the functions of some of the hardware buttons.

The second major addition is the rhythm‑creation and sampling facilities. Actually, it was more of a surprise to find them missing from the R16 than to see them included on the R24, as Zoom have almost always bundled a set of drum pads and sequencing/sampling tools with their recorders in the past. This time, though, instead of forming a separate section, the nine drum pads line up in a row at the foot of the nine 45mm faders. A 2GB USB stick also ships as standard, and contains 1.53GBs of loops produced by Big Fish Audio and jazz/fusion drummer Peter Erskine, which should be more than enough to help the budding composer get started.

A further significant change is the provision of 48V phantom power to six of the eight XLR inputs (it was only available on two of the R16's inputs). It can be selected to power two, four or six inputs at once, catering for a variety of mic arrangements. This should appeal if you're looking to record close‑miked acoustic ensembles or drum kits, for example.

While they were making these alterations, Zoom also rethought the design of their screen, making it more of a square shape, presumably so that it better suits the on‑screen menus, which are often quite long. In addition, the R24 has been given some 'quick‑key' hardware black buttons, which line up with on‑screen options such as Record, Mute, Solo and Exit.

Finally, for what it's worth, the R24 is now painted an attractive metallic silver, rather than white.

There are eight inputs on the rear panel, all on combination XLR/Jack sockets, and six of these can provide phantom power.

Everything else is very much as before. There are eight combination XLR/jack inputs, which feed a matching number of preamps, and are each served by four‑segment level meters and channel faders. One further stereo channel, with all the same features, is assigned as a master channel and controls click output, mixdowns and mix playback level. Recording is made to SD HC cards of up to 32GB capacity, although it's a rather more humble 1GB card that's supplied.

Computer interfacing is via USB 2.0, and there are jack outputs for sending to speaker systems and headphones. A well‑specified internal effects processor supplies insert and send effects, available in a variety of chain combinations. Naturally, there's a standard transport section, augmented by a set of buttons and a scroll wheel for navigating through songs, assigning markers and establishing loop points. Recordings can be 41.1 or 48kHz, at either 16 or 24‑bit, and its possible to record eight tracks simultaneously. At least that's true if a second machine is not sync'ed using the master/slave USB connection — in which case 16‑simultanous track recording is possible, which is impressive in a device like this. When used as an eight‑in/two‑out interface, recording to a computer, sample rates of up to 96kHz can be used, although the on‑board effects are out of action with settings above 44.1kHz.

Most of the bread‑and‑butter functions of the R24 are straightforward and easy to recall without reference to the manual. Zoom have made a fair attempt at providing a hardware button for most functions, but have inevitably resorted to menus for the setup of system options, effects settings, EQ adjustment and, inevitably, rhythm‑track programming. In the past, I've found Zoom's products bafflingly hard to operate in some areas, and the R24 is no exception. Instead of intuitively finding my way through all of its operations, I spent too much time asking myself various questions like "Why can't I hear the drum pattern I just selected?” and "Why don't the controls operate my DAW?” That said, altering levels, pan and EQ parameters on screen for each track was surprisingly easy — which is important, given that there are three banks, only one of which is mapped to the hardware controls at a time.

In control‑surface mode, I had mixed experiences. I was able to control the transport, faders and channel mutes in FL Studio 9, using the Mackie Control template to represent the R24. However, despite numerous attempts, getting it to work with Sonar 8 proved impossible on my system, even with the Sonar driver plug‑in installed. 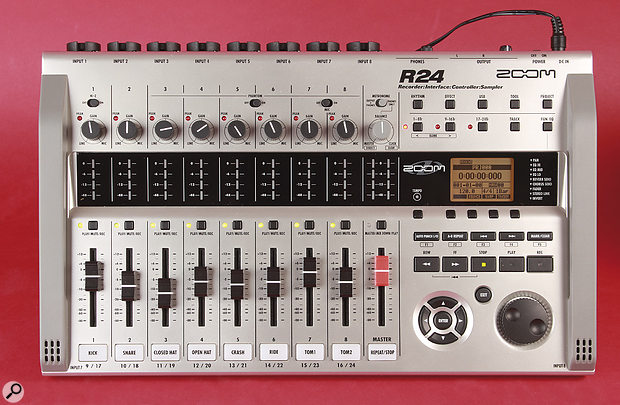 Like the faders, the transport section, jog wheel and associated controls double up to provide DAW control over USB.

Programming drum sequences on the R24 is a frustrating process at first, as it requires working with lists, patterns and data, all displayed on a small screen and in menus which extend off the page. Unfortunately, it just takes time to get used to working that way, but ultimately there is a fair amount that can be done.

Traditionally minded composers will probably head to the sequencer and start editing patterns and chaining them to make a song structure. Even when sticking with a selection of the 400 preset patterns, control can still be exercised over the drum‑kit type and whether it is orientated for the listener or player. When dealing with more complex compositions, there's plenty of grid flexibility for altering time signatures, deleting beats from bars and so on.

Other users, more into hip‑hop styles, are likely to gravitate towards the sampler and its playback options. Material recorded on a track — or imported from external libraries — can be looped (waveforms are visible on screen) and assigned to pads for performance. Triggered events can then be sequenced and played back together with any other recorded parts. It's all standard hardware sequencing stuff, really, and after acquiring a degree of expertise, users should be able to use the tools to compose complex rhythm tracks.

As for stand-alone recording, the R24 works pretty well, and it sounds reasonably good too. Setting up to record is a breeze, and it's very easy to swap recorded audio to another location if using a particular input channel. Guitarists will find that inserting effects is no problem at all, and the in‑built tuner is fast to call up and use. It really does seem as though the R24, like the HD16 before it, is primarily a rock‑solid digital recorder with extra features bolted on, with varying degrees of success.

The machine itself adds no noticeable noise to the room when switched on, which can't be said of the loud hard‑disk recorders of old! Gone too is the CD‑R/W drive, but as this device is designed to work with a computer — which is well equipped for media creation — that's a fair enough omission and will have helped to keep costs down.

In our review of the R16 last year, SOS called for a more professional version, to include better preamps, digital I/O and metering. Zoom obviously haven't identified a large enough market for these features, as only our wish for more phantom-power channels appears to have been granted, but it has to be said that most of the above are either adequate or good already. Zoom's preferred design amendments (the addition of extra tracks and a rhythm machine/sampler), improve the product's credentials as a stand-alone music‑production device, but still leave it slightly lacking as a control surface.

It doesn't have, for example, any continuous rotary encoders that could be used to move on‑screen knobs, and I wonder if it might have been better to have an in‑built keyboard for triggering samples, rather than the pads — as that would make it useful for playing soft synths too. To be fair, though, it's important to have the option of creating some sort of rhythmic backing when recording away from the computer, so if Zoom were faced with a straight choice here they probably made the right one.

Apart from the R24's ability to act as an audio interface, it doesn't represent a massive advance in design over the original HD16, particularly as some of the same usability issues remain. Nevertheless, as a hybrid product that fills a very particular gap in the market, there is much to commend the R24 .

There may be plenty of hard‑disk recorders with rhythm facilities, and control surfaces with interfacing ability — but I'm not aware of anything competing with the R24 that offers the same array of features. In that sense, the only 'alternative' option would be to look for separate products, which might do each job more efficiently or better.

It's been over three‑and‑a‑half years since Zoom released the HD16, and they're still maturing the hybrid recorder/control surface concept that it introduced. The R24 probably functions slightly better as a stand‑alone music‑production device than as a control surface and interface. It's an innovative and reasonably well executed idea, though, which will appeal just as much to those who don't want to take their laptop systems out live as it will to those who still prefer recording with hardware.