Zero–G have given us bangs, crashes and wallops with Impact Designer, and created a sense of speed with Whoosh Designer. To round off the collection is Rise Designer: Cinematic Build Creator. As with both Impact and Whoosh, Rise Designer is a combination of a sample library and a rather specialist virtual instrument and requires the full version of Kontakt. 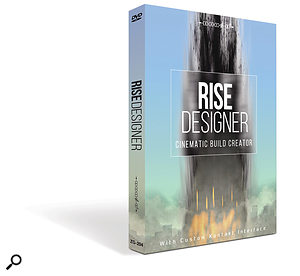 So what is a ‘rise designer’? The prime intention of the library is to allow you to create sounds that ‘rise’ in pitch, reach a crescendo that hits a specific beat or hit–point in your music, and then has a ‘tail’ as it fades to silence. Zero–G achieve this by supplying some 330MB of sample data, and the samples themselves are split into two types: ‘rises’ and ‘tails’. The interface allows you to blend two ‘rise’ samples and combine these with a blend of two ‘tail’ samples.

The presets are organised into a number of helpful categories: Clean, Hyped, Distorted, Dead Stops, etc, and there are also categories where the mod wheel can be used to adjust some of the sound-shaping parameters included in the interface, such as the Hi–EQ and Drive. Within each category you also get ‘science’, ‘disorchestra’ and ‘texture’ presets, and the names give a good clue as to the basis of the underlying rise and tail samples used. Each of the presets provides 16 different combinations of rises and tails, two ‘gate’ keys (so you can mute the sound instantly by pressing these) and five keyswitches that allow you to adjust the timebase of the rise between two and 32 beats. You can, of course, create your own combinations and presets.

The engine allows you to adjust the speed and intensity of the rise, its stereo spread (try pressing the Super button) and to add effects such as drive, compression, filter, delay and reverb effects — there are, therefore, plenty of options to customise the results. There are a couple of other elements of the interface worth mentioning. First, the central ‘tree’ graphic is a clever touch. This lights up as the rise triggers and gives you a very useful visual cue of just when that ‘hit’ is going to happen. Second, the large Random button does pretty much what you would expect and, if you are just feeling experimental, keep pressing until that perfect rise comes along.

Just like Impact Designer and Whoosh Designer, Rise Designer would be a great tool for a media or film composer to have at their disposal. In addition, these sounds would work brilliantly in a straight musical context, particularly in electronic/dance music production; the library allows you to build to a transition and can add a very effective sense of excitement — and makes it almost too easy to do so. Rise Designer sounds great; a niche product, perhaps, but a very good one.