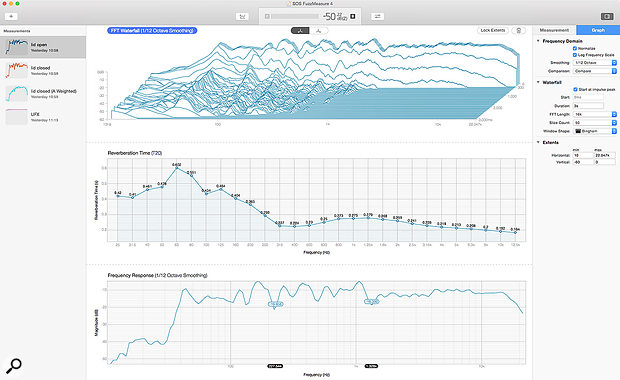 The first step towards treating room acoustics is identifying the problem areas — and that’s where FuzzMeasure can help.

If there’s something we’ve all learnt from the pages of SOS over the years, it’s that for most studios, well-judged acoustic treatment matters at least as much as gear, and perhaps even more so. Having a good room to mix and track in, with excessive bass energy absorbed and standing waves and flutter echoes dispersed, can make a world of difference to the final quality of the mixes that emerge from it. And if achieving that justifies a few Hobnob-related calories, so much the better.

The problem of course is that few home- and small-studio owners can justify the expense of bespoke design by a professional acoustician. That traditionally leaves a few options, including ‘hit and hope’ installation of acoustic treatment products, trying to subjectively judge level changes in slow sine sweeps, or measuring room size and letting physics dictate which frequencies and locations could be worst affected. Some loudspeaker manufacturers will also sell you relatively expensive proprietary room-correction systems, the value of which is not universally agreed upon.

What many studio DIY-ers would find useful is more hard data, and that’s where the subject of this review comes in. SuperMegaUltraGroovy’s FuzzMeasure 4.0 is OS X-only software that analyses recordings of self-generated sine sweeps to produce an array of graphs and charts, designed to reveal different aspects of room behaviour. You can, of course, use it to analyse the frequency response of studio hardware as well, though unlike specialised, purpose-built test equipment, it will be dependent on the behaviour and specs of your audio interface.

FuzzMeasure is a supremely clean-looking application. One of its windows represents a single ‘.fume4’ document, which contains the audio recordings associated with one or many sine-sweep measurements, as well as all the various customisable visual analyses that go along with it.

The screenshot shows a typical FuzzMeasure view. The exact provision of graphs in the central column is a matter of personal choice, but there are also some preconfigured templates such as ‘Studio’ and ‘Live Sound’ on hand to get you started. Three graphs fitted comfortably on my screen for this shot, but in fact any number can be open concurrently, and are then just a scroll away. They’re easy to create, reorder and delete. The tabbed sidebar at the right-hand side gives information and configuration options for individual measurements or graphs. And on the left is a list of the measurements themselves, every one derived from its own separate sine sweep.

Remembering to close the lid of the harpsichord can make a surprisingly large difference to the shape of your waterfall plot!

If you’ve the slightest familiarity with these kinds of test plots you’ll realise that the top ‘FFT Waterfall’ by itself represents a sophistication and density of data that could only be dreamt of by the poor soul sat listening manually to sine sweeps or test tones. It is, in effect, multiple frequency response curves layered to show how the room responds to a theoretically instantaneous impulse, over the course of three seconds (in this example). You’ll also probably think, as I did when I generated it, what a hideously bad room I’ve got, with gobs of low-end and mid-range resonance. But that was before I noticed I’d accidentally left the lid of my harpsichord open, with some strings undamped (as you do). A subsequent sweep (coloured red) with the lid closed looks a lot cleaner in the time domain.

FuzzMeasure can show multiple curves on a single graph, allowing measurements to be directly compared.Once you’ve gathered multiple Measurements — perhaps from before and after repositioning acoustic treatment, or relocating your monitors or listening position — you can then name them descriptively. Select more than one and FuzzMeasure superimposes them, with colour-coding, on a single graph. The scope here for revealing differences is terrific: variances jump right off the screen, and should help to guide acoustic treatment DIY-ers towards optimal setups. The graphs are configurable, and interactive too. Trackpad gestures, mouse moves and keystrokes let you easily focus in problem areas, or drop markers (on a dip in a frequency response curve, for example) to reveal precise frequencies and level values.

There are other niceties. An important one is the option to correct for audio interface latency, by making a loopback connection between an input and output, and engaging Automatic Correction before making a Measurement. FuzzMeasure is then able to calculate latency and adjust the acoustic measurements accordingly. Another is a group of graphs relating to the ISO 3382 standard for measuring and assessing acoustic environments. RT60 Reverberation Time is seriously useful, revealing the time it takes the reverberant tail to decay 60dB under the direct signal, shown in octave or third-octave divisions. So is the Clarity graph, which indicates in percentage terms the ratio of early to reverberant sound, and thereby the ‘intelligibility’ of an acoustic. I could imagine employing these on a location recording, to measure the characteristics of an unfamiliar control room. Even if I wasn’t able to improve the acoustic I’d at least have an idea of how it related to rooms I did know, and to what degree I could trust my monitors, as opposed to headphones, for making critical decisions.

The range of analysis types on offer is pretty comprehensive, and includes some related to the recent ISO 3382 standard.There’s much to admire in FuzzMeasure, and the asking price (for the Personal Licence, at least) is minuscule relative to what’s on offer. It takes advantage of the latest Mac technologies and is extensively scriptable. It can import impulse responses from other software or field recordings, combine multiple measurements in the frequency and time domains, and apply A- and C-type perceptual weightings on captured data. And for those wanting to share Measurements, graphs can be exported in bitmap or vector formats suitable for Web or print publishing. Notably too, for this first release of version 4.0, it never exhibited the slightest bit of instability.

At the same time, one of the software’s greatest strengths — its ease of use and cooperation with a broad spectrum of hardware — might also be viewed as a weakness. It’s all too easy to dive in, make some ad hoc settings, and believe the measurements you’re generating represent chapter and verse. The trouble is, of course, that there are so many variables. The sine-sweep playback level might not be high enough to adequately ‘excite’ the room for typical listening levels. Or it might be so high that your monitors are in fact distorting, or the mic circuitry overloading. Some mic response and level calibration features are options, but in essence, FuzzMeasure is totally indiscriminate about a user’s poor working methods and measurement practice.

There’s also very little in the way of general guidance or context in the provided help materials. The floating Help window documentation is accurate but only rudimentary, focusing exclusively on application features and saying little or nothing about good practice or interpretation of data. It would be great if the developers could create a real buzz around the application, perhaps providing some case studies for different kinds of studios, showing how different graphs were used to diagnose and solve problems. This would be such a valuable resource for the FuzzMeasure user base, the vast majority of whom, I’d be willing to bet, have had no formal training in acoustics. It’d also be useful to see some discussion concerning the way that some monitors (especially ported designs, or subwoofer-and-satellite combos) leave their own distinctive mark on acoustic measurements. The danger is that to the untrained eye almost any wobble on a FuzzMeasure graph looks bad, and it would be all too easy to spend lots of time and money on attempting to iron those out when it’s neither necessary nor even achievable.

Still, even without this kind of infrastructure, FuzzMeasure is a super little application whose combination of sophistication, ease of use and great value for money should appeal to lots of keen small studio designers. Careful gear selection, level setting and a thoughtful approach will be essential for good, repeatable results, and some reading up on the challenges associated with studio design will make the software that much more useful again.

Room EQ Wizard, for OS X, Windows and Linux, is donationware and includes some of the same spectral and time-domain graphs as FuzzMeasure, as well as a rather natty Room Simulation feature that predicts likely frequency response and modal resonances. Design-wise, though, it lacks the polish and sophistication of FuzzMeasure. 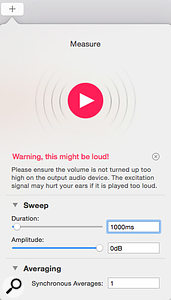 Configuring FuzzMeasure and making your first measurements are surprisingly straightforward, and done via menus that pop up from the main window’s title bar.Assuming you’re trying to measure the acoustic response of your room, you will need some hardware to get started with FuzzMeasure. As well as a Mac running OS 10.10 ‘Yosemite’ or later, you’ll need a USB or Firewire audio interface, preferably with at least two line-level inputs and outputs as well as mic preamps, plus a speaker or powered monitor and a microphone. The best choice of mic is a dedicated measurement mic, with ruler-flat frequency response across the audible spectrum, but in fact many other reasonable-quality omnis, especially small-diaphragm models, work almost as well. Even if their response isn’t pan-flat, it’s likely to vary very little in comparison with that of most rooms. There’s also the possibility of loading calibration information for non-linear mics in the form of an easily formatted text document.

In the case of analysing a listening position for mixing, you’d then set up the mic where your head normally goes, facing forward, and leave your monitors where they normally are. Thereafter, everything can be configured with the controls of your audio interface, and via the software itself. Initial channel configuration takes place in the Audio Settings pop-up menu. Then the only thing that’s vaguely labour-intensive is establishing good playback and mic gain levels with some speculative ‘Measure’ attempts, to maximise signal-to-noise ratio without clipping.

There are two licence levels for FuzzMeasure: the $499.99 Commercial and $99.99 Personal. The former includes a 12-month ‘Software Maintenance Subscription’ that covers updates for major and minor version releases, tech support via email, and early access to beta versions. Subsequent years cost $199.99. Hobbyist users on the Personal licence get only minor updates included, and a limited level of tech support. There isn’t a way to upgrade from Personal to Commercial, but a 50 percent educational discount is available on both.

FuzzMeasure gives you all the tools you need to generate and analyse data about room acoustics — as long as you know what to do with them!