Zero-G have given us bangs, crashes and wallops in thunderous variety with their recent Impact Designer library for Kontakt. Now, as a complement to that library, we get Whoosh or, to give it its full title, Whoosh Designer Cinematic Speed Creator. As with Impact Designer, Whoosh is a combination of a sample library and a virtual instrument. Some 750MB of sample data are spread across nearly 700 samples but, via a rather nifty custom front–end, these are organised into 165 instruments for Kontakt 5, and the sounds can be triggered from your MIDI keyboard. As with Impact Designer, Whoosh Designer requires the full version of Kontakt (5.3.1 or newer); it will not function with the free Kontakt Player. 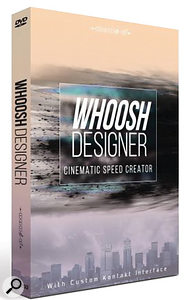 If you have used Impact Designer then the front–end of Whoosh will be instantly familiar, but it is worth starting with a few words about this as it is key to how the library works. Each ‘whoosh’ sound is constructed by combining three sound elements and then adding a suitable dose of the processing options included with the sound engine. The three elements of the sound — and within Whoosh these are labelled Attack, Peak and Decay — are each based upon multiple samples (so there is no machine-gun effect results) and, as you can combine the samples in these three elements in a pretty much endless set of combinations, within what is admittedly a niche sound (well... just whooshes really), there is plenty of variety on offer.

As the engine allows you to adjust the speed of the whoosh, whether you want something that’s over in a flash or builds and then slowly decays, you can do it all. You can also change the direction of a whoosh — pan it centrally or make it move left–to–right or right–to–left — so, in terms of stereo placement, you get a real sense of movement to match the nature of the sound. The control set — spread over two compact and uncluttered screens — makes this all very easy to experiment with and, because it includes drive, compression, filter, delay and reverb effects, you can customise the already wide variety of sounds possible even further.

And the sounds themselves? Well, if you are a sound designer working on sci–fi, horror or action footage, just like Impact Designer, Whoosh Designer would be a great little tool to have at your disposal. The obvious application is for supplying an instant sense of movement from the tiniest robot to the sleekest of warp–driven space ships. In that context, Whoosh has just the whoosh you need. However, it’s not just a sci–fi tool and can also create sounds that are more organic. In addition, I can easily imagine these sounds working brilliantly in a more conventional musical context to provide the occasional spot sound effect to highlight a particular hit or musical transition. If you have a need for whooshes or whizzes to make sound fly, Whoosh Designer is just the thing. John Walden