Violet Design’s microphones usually cost more then these two new offerings, but despite this, both the Maestro and Atomic are still built in Latvia, rather than the Far East, and the capsules are still made in the same way as Violet’s other mics — a process the company developed themselves whereby the diaphragms are sputtered with a gold alloy in an irregular fashion onto the insulating film. They claim that this technique improves transient response and lowers distortion. Each capsule is also individually checked in an anechoic chamber. 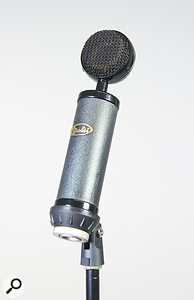 Cosmetically, the microphone follows the popular format where the basket protecting the capsule is supported above the body on a short ’neck’. Overall, the mic measures 225mm; the multi-layer mesh basket is 60mm in diameter and the body 42mm in diameter. Violet claim an EIN of just 7dB (A-weighted), which is creditably low, yet the mic can handle SPLs of up to 134dB before significant distortion (greater than 0.5 percent with a 1kΩ load) occurs.

Designed for close-miking solo vocals and acoustic instruments, including brass, drums and piano, the Maestro is clearly being pitched as good all-rounder. Its designers also recommend it for electric guitar miking, though this is much more of a subjective area. Its response curve as shown in the manual has a subtle presence peak at around 7kHz to aid clarity, and matched stereo pairs are available to order. Sensitivity is a not untypical 24mV/Pa, and the dynamic range is given as 127dB — essentially the maximum SPL minus the equivalent input noise.

As supplied, the microphone comes with its rigid stand adaptor in an elegant wooden box with a slide-out lid, not unlike an old-school pencil case, but with a nice violet lacquer finish. Optional shock mounts are available to fit. It is also worth noting that both microphones come with a limited 10-year warranty that applies only to the original purchaser. Three transit screws fitted into the edges of the basket keep the capsule steady in transit but must be removed before use to free up the capsule suspension.

The balanced output stage, which has an impedance of 50Ω, feeds out via a conventionally wired XLR connector with gold-plated pins.

There are no pad or filter switches on the microphone so it’s really as simple as plugging it in, applying phantom power (40 Volts minimum, 48 Volts recommended) and setting the preamp gain, and then you can start recording.

Despite the name, no nuclei were knowingly damaged in the manufacture of this microphone, which is pitched at a lower price than the Maestro. Billed as a versatile and warm-sounding capacitor microphone, the Atomic is built around a single-membrane VD21 (21mm diameter) true capacitor capsule, again feeding a discrete FET preamplifier with a transformerless output stage. The simple cylindrical body measures 160 x 42 mm in diameter, and a locking ring at the bottom allows it to screw onto the included swivel standmount.

A tall basket comprising a single mesh layer leaves plenty of space around the capsule, which is fixed on a resilient mount, and the Violet Designs logo on the body shows the ‘hot’ side of the capsule. As with the more costly Maestro, matched stereo pairs can be provided to special order. On our sample the capsule was positioned a little off centre, but that could have been a result of rough handling in transit as, unlike the Maestro, it doesn’t have the benefit of stabilising transit screws. 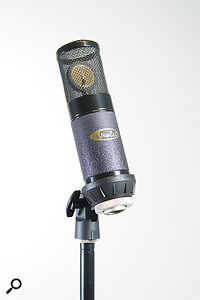 According to the promotional material, the Atomic comes packed with its microphone holder in a ‘luxurious’ wooden box, though our review sample came wrapped in ‘merely comfortable’ plastic. Once again there are no pad or filter switches, and standard 48V phantom power is required for operation.

On paper the frequency plot looks very similar to that of the Maestro, where a nominally flat 20Hz to 20kHz span is punctuated by a broad, very moderate presence hump centred at around 7kHz, though subsequent tests showed the mics to sound quite different from each other. The Atomic’s sensitivity is rated only marginally lower than the Maestro’s, at 22mV/Pa (1kHz into a 1kΩ load) while the EIN figure makes the Atomic even quieter than the Maestro, with a self-noise of just 6dB A-weighted. Again, the maximum SPL is a healthy 134dB.

Despite the spec-sheet similarities of these microphones, especially their cosmetically smoothed frequency curves, they actually sound very different. These differences show up easily on voice, though the results achieved with instruments can be more significantly influenced by microphone position. On spoken word with the mic around 300mm from the mouth, the Maestro balances a warm low end with slightly forward highs. This aids clarity but could easily sound slightly aggressive with voices that are already on the bright side. By contrast, the Atomic rounds out the highs, producing a smoother sound overall, which could be just what you need for a singer with an aggressive edge to their natural voice, though it may be a poor pairing for a singer who needs to enhance their clarity and presence.

On acoustic guitar both mics produce adequate note definition balanced by a nice sense of fullness in the lower mids, and though differences are still audible, with the Maestro coming across as the more brash of the two, a little fine-tuning of the microphone position coaxes perfectly good results from either microphone.

Placed 300mm or so in front of a guitar amplifier, the two mics once again sounded very different, but still produced musically valid results. The Atomic delivered a warm sound similar to the way the amp sounded out in the room, while the Maestro gave the sound much more bite and immediacy. Both could be useful and both responded well to EQ and changes in mic position.

It seems that the Maestro and Atomic lean to either side of what might be considered neutral, with the Maestro adding presence and the Atomic creating more of a sense of smooth warmth. If choosing a vocal mic for yourself, there’s no better advice that I can give than to choose the mic that works best with your own voice, so there are no winners or losers here — in fact it pays to try out as many mics as you can get your hands on.

As all-round instrument mics, either model is capable of good results, so you just need to take their inherent tonal characters into account when positioning them. While EQ can be useful in shaping the final sound, you’ll always be better off adjusting the mic position to get closer to your desired result before you hit record.

Given the standard of manufacture and performance, the prices of these two mics are not unattractive, but in the same breath I have to point out that this is an extremely competitive price sector and both models face some very strong competition.

It’s hard to know where to start with alternatives, as any decent capacitor mic in the same price range is a potential competitor regardless of origin. Manufacturers that spring to mind include Blue, SE, MXL, Audio-Technica, Studio Projects, Sontronics, Prodipe and AKG, though there are numerous other companies building affordable and capable studio microphones.

Both of these microphones have distinct tonal characters, so try each of them if looking for a mic for use with a specific voice. They also work well as general-purpose instrument mics.