Violet bid for a place at the higher end of the mic market with this vintage-styled valve model. Will it turn out to be a real gem? 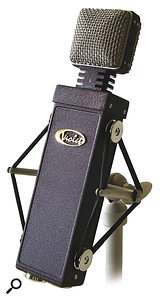 Violet Designs' microphones, built in Estonia, are nothing if not distinctive‑looking, and as you can see from the photograph, their Garnet model certainly upholds that tradition, with its boxy outline, square basket and muted purple crackle‑effect paint livery, which is also the finish used on the power supply.

This multi‑pattern valve mic is well specified for use on main vocal parts, but also flexible enough to use in most acoustic‑instrument recording situations. It offers nine selectable polar patterns from omni, via cardioid, to figure‑of‑eight. Matched pairs are available on request, and each mic comes in a sumptuous wooden case with its accessories.

At the heart of the microphone is Violet's dual VD47 capsule, protected by a multi‑layer brass mesh grille. The Class‑A valve preamplifier feeds a humbucking, custom‑wound audio transformer that balances the microphone's output, and both the valve and the transformer contribute to the tonal character that makes valve mics sound warm and slightly larger‑than‑life.

The included PSU5 power supply has a soft start, meaning that the voltage comes up slowly rather than abruptly, which should extend the valve life. The kit also includes a JSM‑model elastic suspension shockmount.

Unusually, the pattern selection is via a row of nine toggle switches rather than a rotary selector. It's a logical enough arrangement, though: any selected switch always takes priority over those to its left, so nothing weird happens if you have two non‑adjacent switches on; the rightmost one is the one that determines the pattern. As with most multi‑pattern mics, you should ideally leave the mic for a couple of minutes after switching patterns, to allow the capsule voltage to adjust and stabilise. There are no pad or high‑pass filter switches on either the microphone or the power supply.

The 26mm‑diameter capsule diaphragm is fabricated from a proprietary polymer film coated using Violet's own 'irregular sputtering' process to deposit a thin layer of custom gold alloy. These diaphragms are tensioned over precision‑machined brass backplates, and every capsule is tested and measured in an anechoic chamber. To minimise the effect of vibration, the mic body has been made deliberately quite heavy, and the valve base itself is mounted on a resilient damper. A high‑quality, seven‑pin XLR cable connects the mic to the power supply, and the connector pins are gold‑plated, to ensure a good connection.

The mic's body is a rectangular box shape, with a threaded mounting point and a seven‑pin XLR socket at the bottom. Chrome bobbins are fixed to the sides for engaging the shockmount, and the basket is square, with three threaded studs to hold the capsule steady while in transit. These should be removed before the microphone is used, much like the transit bolts in a washing machine.

By way of performance, the spec sheets throws us a vague figure of 20Hz to 20kHz, but, as is so often the case, no limits are included, so that figure is rather meaningless. The printed graphs on the web site have no meaningful vertical scale either, which makes them equally vague, but they do at least give a good idea as to the general shape of the response, which is devoid of obvious presence peaks and has a very slight dip in the mid‑range, centred at around 700Hz. Sensitivity at 1kHz (into a 1kΩ load) is a very typical 25mV/Pa, but the equivalent noise level, or EIN (DIN/IEC A‑weighted), is a surprisingly low 8dB, which would be more than respectable even for a solid‑state mic. The power supply can be switched to work on 100, 120, 220 or 240 Volt AC supplies from 45 to 65 Hz.

The Garnet was tested alongside the Miktek CV4, both being multi‑pattern valve mics, and I used my AKG C12VR as a reference point, with its low‑cut filter switched in (the C12VR's low end always sounds overblown in comparison with most other mics). We've placed some audio examples from all these mics on the SOS web site at /sos/jul11/articles/violetgarnetmedia.htm, so you can hear the mics on various sources for yourself. On voice, the Garnet was crisper than the C12VR and very well balanced, but perhaps marginally less airy‑sounding than the Miktek. The same relative differences were audible on my acoustic guitar, electric guitar and percussion tests, with the C12VR sounding a little 'chesty' alongside the two newcomers. I liked how the Garnet interpreted the sound of the instruments, as it brought their little resonances and details to life very nicely, while always sounding smooth. The acoustic guitar sound was pretty much 'ready', with no need for EQ or further processing, and the electric guitar amp sounded pretty much as I heard it in the room, both when miked from 0.5 and from 1.5 metres. I find that some capacitor mics can sound overly aggressive when used on guitar amps, but I have to say that the Garnet did a really sweet job. I was also impressed by the low self-noise of this microphone.

I think it's fair to say that the sound of the Garnet rivals that of many high‑end boutique mics — but then it's by no means a cheap microphone itself. It is a genuinely strong all‑rounder that works as well on acoustic instruments as it does with voice, delivering a warm and confident sound with a smooth but well‑defined top end. I was surprised by how close it sounded to the only marginally brighter Miktek CV4, but there's no doubting that this is a fine microphone that sounds as good as it looks.

Similarly‑priced alternatives include the AKG C12VR, though the Miktek CV4 can give it a good run for its money at a significantly lower price point. Realistically, the market is not short on multi‑pattern microphones, but the choice narrows somewhat when you get up into this price bracket.

The Garnet is a very well‑specified mic that sounds great on vocals and most acoustic instruments. It is, however, rather expensive.