Are the Amethysts a bit of a jewel in the studio, or only semi-precious? Let's find out...

The Latvian microphone manufacturer Violet has had a somewhat bumpy introduction to the marketplace. Most SOS readers will be familiar with the quirky Blue microphone range, which was originally claimed to be built in Latvia from Blue's own designs — and many of the Violet mics appear to be remarkably similar to the previous Blue models. 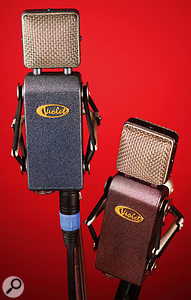 Subsequently, the owner of the Latvian factory, Juris Zarins, claimed that he designed all the original Blue mics and that Blue was really just a marketing brand. Various legal battles and copyright disputes have followed, and as a result Zarins now markets his microphones directly under the Violet name. The new range retains much of the same individualistic styling for which the original Blue models were so well known, and every part of his microphones continues to be manufactured in the factory from bespoke designs. However, the mics are no longer made in Riga, Latvia. In 2003 the offices and production moved to Tallinn, Estonia, and the manufacturing technology was improved significantly.

The new Violet model reviewed here is the Amethyst and is available in two versions: Standard and Vintage. Physically, the two models are identical, save for the colour of their bodies (a warm purple for the Standard and blue-grey for the Vintage) and the model name painted on the back. However, internally they have completely different capsule designs, resulting in different sonic qualities. The Vintage model is the more expensive of the two.

The Amethyst is a solid-state cardioid capacitor microphone, and a very rectangular microphone at that. The 25mm circular capsule sits inside a thin housing roughly 50mm square, with multi-layer brass-mesh grilles at front and back. This is supported above the main body of the mic on two stubby posts, and three protective lock-screws have to be removed before the microphone can be used.

The idea of mounting the capsule away from the main body of the mic is not new — lots of manufacturers do it in a variety of ways. The idea is to minimise the possibility of approaching sound waves being reflected into the capsule from the body, where they would set up interference patterns that colour the sound. It also makes it easier to provide separate shockmounting for the capsule, and allows more freedom in the physical styling.

The main body of the mic is painted in a textured paint and is about 105mm long. On each side are a pair of 'pulleys' which retain the suspension elastics of the optional shockmount (see photo on next page), while the base features both the XLR output connector and a 5/8-inch threaded hole to allow the mic to be mounted directly on a mic stand. The discrete, transformerless, solid-state electronics in the main body and the capsule in the separate head section are both supported by internal shockmounts, for a degree of mechanical isolation. The specifications give the mic's overall dimensions as 168 x 63 x 41mm, with a weight of 350g.

The capsule features a six-micron Mylar-film diaphragm and Violet claim all manner of proprietary techniques for the gold-sputtering alloy and tensioning of the diaphragm on the brass backplate. The standard model's capsule is a single-diaphragm, centre-terminated design, whereas the vintage model has dual diaphragms, the front one, again, being centre-terminated. These capsule arrangements affect the low-frequency polar response of the mic, amongst other things (see 'Single & Dual Diaphragms' box, below).

In other respects, both models share identical technical specifications. The frequency response is claimed to extend from 20Hz to 20kHz, and although no limits are given I'd hazard a guess at ±2dB. The output impedance is 50Ω and sensitivity is a healthy 21mV/Pa. Equivalent self-noise is more or less the current state of the art, at 7dB-A (DIN/IEC), and maximum SPL for 0.5 percent distortion is 134dB. The mics require 48V phantom power, from which they draw less than 2mA, and the output is positive on pin two. All very respectable indeed!

The microphones are packaged in protective cardboard boxes that contain lovely, velvet-lined wooden cases, lending a nice air of tradition and quality. Optionally, matched pairs are available for stereo-recording applications.

It has long been known that single- and dual-diaphragm microphones 'sound' different to one another, and it has become almost traditional to employ dual-diaphragm capsules for vocal applications, where the inherent bass characteristics work well. Strangely, it seems that the reasons for the sonic differences were not fully understood until Guy Torio reported on the subject in a paper at the 109th AES Convention in 2000.

It's quite easy to demonstrate that different diaphragm arrangements alter low-frequency polar response with proximity, as well as the amount of proximity effect, the combination of which has a knock-on effect on off-axis coloration. Put simply, for a given mic-to-source distance, a dual-diaphragm capsule tends to have a polar response that is less directional than its single-diaphragm equivalent. When used close to a sound source, a single-diaphragm cardioid has a polar pattern that tends to bulge towards omni around mid frequencies and more towards a loose figure-of-eight shape at low frequencies. Dual-diaphragm mics, when used close to a source, tend more towards a hypercardioid pattern at low frequencies, complete with the characteristic tail. At greater mic-to-source distances, a dual-diaphragm mic often has a noticeably slacker cardioid pattern, which widens even further towards omni at low frequencies. It's also worth noting that a dual-diaphragm capsule generally suffers less proximity effect and is less susceptible to plosive popping. These characteristics become important when selecting a mic for different applications.

For example, if you're miking in the far-field — a crossed pair in front of a choir or orchestra, say — a single-diaphragm capsule will provide a more accurate polar response, rejecting low-frequency sound from behind more effectively. It will also have a more accurate on-axis response, with less off-axis coloration. Conversely, if you're close miking, polar response at low frequencies is generally better with a dual-diaphragm capsule, particularly if the unwanted rearward sound sources are also in the near field.

The overall impression I gained from reading the manual for these mics and looking at their technical specifications is that they have been optimised for close miking first and foremost. While they can be mounted directly on a stand, that wouldn't be my preferred method, although the internal shockmounting helps. However, a proper external shockmount is so much better, and fortunately I was supplied with dedicated optional mounts that are very easy to fit and very effective. One rather handy feature is that the bulk of the shockmount extends behind the mic's body, which means that the mic itself can be placed closer to sources than is often the case with more conventional shockmount cradles. Given the price of these Amethyst mics, I was surprised that the shockmounts aren't included as standard. The multi-layer mesh grille either side of the capsule helps to prevent plosives and wind blasts, but (as you'd expect) a separate windscreen placed a couple of inches in front of the capsule works much better. Violet offer optional metal or fabric screens, but any generic design will serve the purpose and should be considered mandatory when recording vocals. 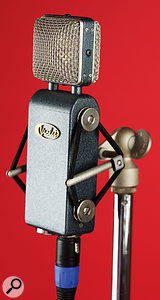 Both microphones sound very open and natural, with fast and accurate transients, extended bottom ends and modest proximity effects, the Vintage model being slightly better in this respect. Comparing the two models side by side quickly revealed their sonic differences. The Standard version has more 'air', with a noticeable lift at the extreme HF end compared to the Vintage. It also has a mild 'suck-out' at upper-mid frequencies — around 800Hz or so — which emphasises its brighter aspect. In addition, there seems slightly more bass, but I suspect that's a proximity issue rather than a frequency-response characteristic.

The Vintage model seems to me the more neutral and linear of the two designs, and in testing it compared a lot more closely to my ruler-flat Sennheiser MKH40 reference. However, I'm not sure that the 'vintage' tag is really justified — it sounds pretty modern and bright, certainly in comparison to many of the mics now available that have a deliberately 'aged' sound quality. Don't expect the warm and dull sound that the 'vintage' term might suggest!

The other obvious difference between the two models is the polar pattern. Both are nominally cardioids, but the Vintage model's pattern is noticeably wider than the Standard — an inherent effect of the dual-diaphragm design. As with any large-diaphragm mic, there is obvious off-axis coloration at the extremes, but the sound is well balanced over a usefully wide working range on both models. The rear rejection isn't the best or most uniform that I've ever come across, but it provides sufficient separation for most normal situations and does reflect the inherent characteristics of single-diaphragm and dual-diaphragm mics quite well.

On voices, the Vintage Amethyst is the cleaner and more natural of the two, free from sibilance but still bright and clear. The Standard version is noticeably brighter and may well tend towards a sibilant sound with some vocalists. With percussive sources such as pianos and acoustic guitars, the extra 'air' of the Standard model seems to help tracks cut through in a mix better, giving a lovely, precise, detailed sound quality. However, with harmonically complex sounds such as orchestral string sections or brass, that enhanced air tends to upset the spectral balance and I preferred the flatter response of the Vintage model every time.

If I had to buy just one Amethyst mic, I think I would favour the Vintage model for its more natural sound character and versatility. Typical that this is the more costly model of the two — I always have had expensive tastes! However, both versions are excellent in their own way (not dissimilar to the differences between the AKG C414 XLS and the XLII, in fact), and both are recommended additions to a microphone shortlist if budgets allow.

The options at this price level are numerous and it's fairly safe to say that all mics in this sector are capable of delivering a high-quality sound. The AKG C414B XLS and C414 XLII models are probably the closest in concept and sound character to the Amethyst in many ways, but are rather more versatile. The Neumann TLM103 is a fixed cardioid mic that bears comparison with the Vintage model in price and design, although it has a slightly more coloured sound character. The SE Gemini mic might also be considered, but this might sound a little congested in the mid-range, compared to the Amethyst. A good alternative — and smaller — is the Microtech Gefell M930.

The Amethyst is an attractive and well-built microphone that delivers a sonic performance commensurate with its price. The Vintage and Standard models really are entirely different beasts, though, with differing strengths and weaknesses, and they should be appraised with that in mind.