This hands‑free take on the long‑established E-bow concept offers a promising new palette of sounds for the recording guitarist. 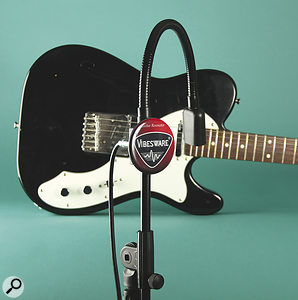 The electric guitar is perhaps unique in the way that misuse and malpractice have shaped its development. The instrument had barely been invented when, in the late '50s, players began to deliberately abuse their equipment to create new, thrillingly unruly sounds. So it is that distortion and feedback — two things that are undesirable in just about any other context — have become part of the rock guitarist's standard repertoire.

The latest device designed to nourish the guitarist's insatiable appetite for squealing sustain is the Vibesware Guitar Resonator, a sophisticated harmonic feedback generator. The German company's founder Markus Pahl says he was inspired to develop his product by the desire to generate the kind of sustain and feedback associated with loud amplification in a silent, DI'd environment. If it succeeds, then, the Guitar Resonator could be big news not just as a way to expand the guitar's sonic capabilities, but as a practical aid to recording. 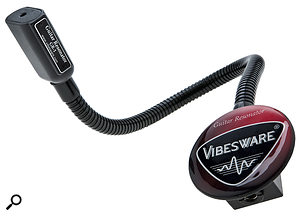 The GR1 control box (top) and the optional footpedal controller (above).

It's impossible to talk about the Vibesware Guitar Resonator without mentioning the E-bow, a handheld, battery‑powered device which houses an electromagnetic pickup and 'string driver' inductor coil. If you amplify any acoustic stringed instrument and point the speaker back at it, sufficient volume will generate feedback. The E-bow works in the same way, except that instead of using sound waves it 'listens' to the frequency of a single string, and then directs a sympathetic oscillating magnetic field back at it, further stimulating the vibrating string, thus creating a sustaining feedback loop.

Conceived in the late '60s, and commercially available since 1976, the E-bow is far from a recent development. Although it has hardly established itself as an essential accessory for every guitarist, it has proved enduringly popular, and, from early adopters like Steve Hackett and Bill Nelson to the likes of Radiohead, the Smashing Pumpkins and Sigur Rós, the device has featured on countless records. While its distinctive sound (not unlike conventional guitar‑meets‑amp feedback, but more even, compressed and harmonically complex) is treated as a special effect by many, for experimental players it's an indispensable tool for expanding the noise‑making potential of the guitar and other stringed instruments.

The Guitar Resonator GR1 system works on the same basic principle as the E-bow, with the obvious difference being that it is mounted on a mic stand, leaving both of the player's hands free to play as normal. The resonator head is positioned on the end of an adjustable gooseneck, and features a helpful LED to show you where on the guitar neck it's pointing — position is a key factor in the harmonic content of the feedback generated. 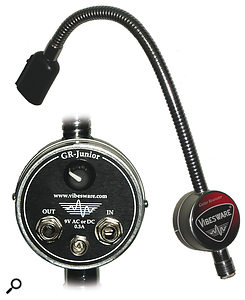 The GR Junior.From here, a stereo TRS‑jack lead connects to a small pedal unit, which is powered by a 9V DC mains adaptor and features an on/off footswitch, a knob to set resonator power (confusingly labelled 'Vol.') and a phase footswitch. The latter allows you to select conventional sustaining feedback, or reverse the phase to emphasise the octave harmonic. The guitar signal also passes through this foot pedal, via quarter‑inch jacks, allowing the system to listen to the note you're playing — or, indeed, notes, as this system does not limit you to focusing on one string like the E-bow.

An additional accessory is the GR1 Footcontroller. Looking very similar to a Crybaby wah pedal, this connects in line between the resonator head and control box, and offers additional control of feedback harmonics. Rather than having a smooth action, the treadle has four notched positions, so you can move through the harmonics from low to high at will.

Vibesware also manufacture the GR Junior, a more compact and affordable version of the Guitar Resonator. This does away with the separate control box by placing the guitar in and out sockets, the power supply input, and the 'volume' control at the base of the resonator head gooseneck. The head itself is slightly smaller and less powerful than that of the GR1, and has the phase switch mounted on the side. 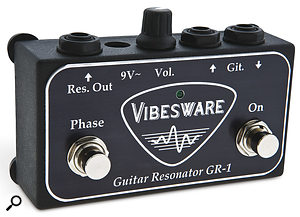 Vibesware suggest starting off with the guitar's bridge pickup selected and the volume and tone controls on full. The angle of the resonator head is crucial — it needs to be straight on, at right angles to the strings — and it took me a little while to adjust the mic stand, gooseneck and guitar strap so that this felt natural. The angle of the neck tends to change depending on whereabouts you're fretting, after all.

One of the strengths of this 'hands‑free' system is that by moving the guitar around — so that the resonator head is pointing at a particular part of the string — you can alter the harmonics produced. This again takes a bit of practice, as the location the 'sweet spot' for the fifth harmonic, for example, will depend on where you're fretting the string. Playing high up the neck becomes even more challenging, given that there's less string to play with and the resonator head starts to cause some very strange noises when it gets close to the pickup!

It's worth noting that the performance of this system is slightly dependent on the type of pickup you're using. According to Vibesware, low‑output, vintage‑style single‑coil pickups with pole pieces set some distance away from the strings are the hardest to use. That's not to say it's impossible, but realistically, a fair amount of practice is required to develop the necessary technique.

My initial tests largely backed this up. With a Telecaster strapped on, the system seemed ultra-sensitive to positioning and, even with power on full, the strings were sometimes reluctant to sustain unless right up against the resonator head — so close, in fact, that holding them in the right place without actually touching the head was tricky. I had much more joy with a vintage Strat, however, and after a little time spent experimenting with signal and power levels and the positioning of the head, I was getting great results.

It's already clear that there's a bit of a learning curve to getting the most out of the GR1, but remember that the effect of this device is physical — it makes the strings physically vibrate, and that means there are a number of factors at play. Besides the level and frequency content of the output from the pickups (which clearly makes a difference), the string length, string tension and the gauge of string you're using, and therefore the mass of the nickel and steel that the resonator head has to work on, will all have a bearing. 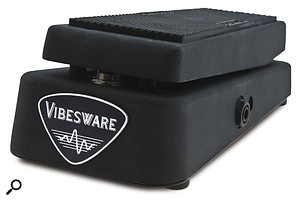 This might mean that the action of the GR1 is not as controllable, predictable or repeatable as a purely electronic or digital processor, but on the other hand there's something very satisfying about this type of effect, which has a habit of throwing up the kind of happy accidents that can really spark your creativity.

Vibesware recommend conventional or single‑coil‑sized humbuckers, but medium‑ or high‑output single‑coils also get the thumbs up. Having dusted off an old 'Superstrat' equipped with suitably muscular pickups, I found GR1 more intuitive to use, and was soon getting the hang of moving the neck around to control and vary the feedback generated.

Given enough output from the guitar in the first place, adjusting the GR1's volume control ('resonator power' really would have been a more appropriate label) reveals how sophisticated this system can be. Set full, the feedback is predictably full‑on, with a touch of the compressed, distorted flavour you get from the E-bow. Rolling it back, however, allows for some much more subtle, natural and transparent‑sounding effects, with the emphasis on sustain rather than feedback.

Flipping the 'phase' pushes the feedback up an octave (imagine playing the harmonic at the fifth fret instead of the 12th), and, with overdrive liberally applied, makes for some great screaming solo sounds. Attaching the optional pedal expands your options in this area still further, and is definitely recommended if you want to explore upper octaves, fifths and thirds — though it must be said that the four notched settings are quite close together and the treadle action is rather loose, meaning that selecting exactly the one you want in a hurry is hit-and-miss.

This being a device for guitarists, it wouldn't be right not to try a bit of creative misuse, and there's fun to be had by putting a tremolo pedal between your guitar and the Guitar Resonator, which yields some great pulsing effects. With the addition of a signal splitter you can get really inventive, applying separate effects to the resonator signal and the amplified signal. Not everything works — a phaser produced some odd results, for example — but there's clearly potential here.

Turning to the GR Junior, this more affordable option stacks up very well indeed. The GR1 may look smarter and better made, but I like the compactness and simplicity of the Junior. You get nearly all of the same functionality, and although the resonator head is a bit less powerful, I didn't notice much of a compromise in performance. The lack of an on/off switch is also not too serious — you can just step away from the device, after all — though for live performance the bypass and phase footswitches of the GR1 are useful. On the other hand I really liked the fact that the volume control for the Junior is right in front of you rather than down on the floor, as it's much easier to adjust as you play. Vibesware should seriously consider adding this feature to the GR1, or perhaps even making it adjustable via a foot pedal. 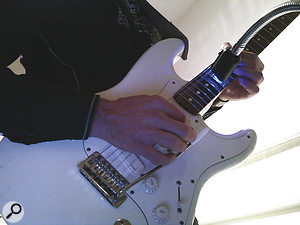 The GR Junior in action: both hands are free to play the guitar while the player 'dials in' some sustain.

As I've explained, there's a bit of a learning curve involved when it comes to using the Guitar Resonator effectively, but it strikes me as a device with a lot of creative potential — and as a special‑effects noise‑maker, that potential is very clear. Using it to realistically recreate the kind of feedback and sustain available when you're standing next to a loud amp takes more practice, but the 'hands free' design is a massive plus here. It's great to be able to play normally and then turn the neck towards the resonator head for a touch of natural sounding sustain on the odd held note.

In assessing the price of the GR1 and GR Junior from the point of view of value for money, direct comparison with other sustainer devices such as the E-bow or Fernandes Sustainer is not all that helpful. In terms of design, features and capabilities, there's nothing else out there quite like this. In fact, I'd say that anyone who's already a fan of, for example, the E-bow will definitely want investigate what Vibesware has to offer. Of the two Guitar Resonator systems, the GR1 is undoubtedly superior, but given its lower price and the fact that it gives away very little in terms of performance, the GR Junior is perhaps the more attractive option.

The Moog Guitar definitely deserves a mention here, as it offers various types of sustain and lots more besides — but apart from that, the E-bow, and the Fernandes system mentioned in the review, I can't think of anything else that performs the same sort of string‑energising sustain. Really, those three all have their own unique features, as does the Vibesware — they all do a similar thing, but in very different ways, and there are things you can do with each that you can't do with any of the others.

An innovative take on the concept of the guitar sustainer, with plenty of potential for innovative and original effects. If you're a fan of the E-bow you really should try these out.