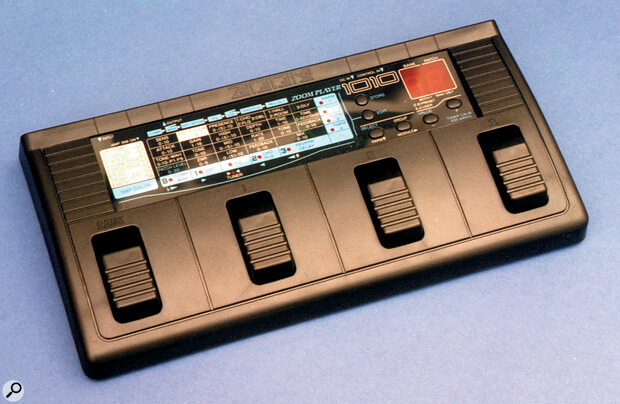 It's cheap, it's cheerful and it's easy to use. Paul White rediscovers the joys of simplicity with Zoom's most affordable guitar multi‑effects unit ever.

Back in the '60s and '70s, when the sum total of guitar effects came to spring reverb, tape echo and the newly‑emerging fuzz boxes and wah‑wah pedals, any serious player would have gnawed off his own back legs for a unit like this, but in the 'instant gratification' 1990s, the immediate eye‑opener about Zoom's new 1010 Player is not the features, but the amazingly low price. Guitar digital multi‑effects in pedalboard format have been around for a number of years now, and many of them are truly excellent, but for the amateur guitarist just wanting to add a bit of spice to his live sound or bedroom recordings, price has often been a barrier.

Zoom have done more than most to democratise good‑sounding guitar effects, and have built units in all forms, from floor‑ and rackmounts to effects you can actually wear. But it's not the shape that matters, it's the sound, and while some other designers have tried to recreate the classic tube amp sounds using digital technology, Zoom have always kept their overdrive stages analogue, which no doubt explains the warm, exciting overdrive sounds for which their boxes are renowned.

The concept behind the 1010, the latest in the Zoom Player range, is obviously to combine a good range of sounds with an easy operating system for as low a selling price as possible, and as with all low‑cost versions of things that should cost more, some compromises have been made. In this case, the whole unit works in mono, even the reverb, and listening to the effects in isolation makes it quite clear that whatever circuitry is in there is working to its limit. In a studio effects unit, this might be bad news, but when it comes to recreating classic guitar sounds, it sometimes actually helps — the reverb sounds much like the spring reverb in an old combo, while the delay has a slightly dull, slightly crunchy quality which reminds me of the old tape loop echo boxes I used to own.

Physically little longer than this magazine, and about as wide and thick as a typical paperback novel, the 'carpet carbuncle'‑powered Zoom Player can produce up to 25 basic effects types — up to six of these simultaneously. All the effects are arranged in series, and the chain itself comprises five effects modules, each of which can be set to produce one or more effects types (see the 'Chain Gang' box for a full rundown). Each of the effects blocks has up to four parameters that can be adjusted.

Patch levels may be adjusted, and the way the effects are arranged provides 30 factory presets and 12 user locations. You also get a very handy guitar tuner built into this unit, something a lot of '60s bands could have done with — I know, I played in one of them!

Four pedal‑type non‑latching footswitches are used to navigate through the effects, which are arranged as 16 banks, each containing three patches. The switch on the left selects the bank, then the other three switches provides direct access to patches one to three. The same switches put you into tuner mode when you need it.

Those Effects Blocks In Full

At the front end of the effects chain is the Comp/Wah module, which is capable of compressing the input signal and handling wah‑wah filtering at the same time — which is how you can get six effects out of five modules. In fact, this section also includes a basic tone equaliser, which can be adjusted to emphasise either the bass or treble end of the guitar spectrum. If you want to use the wah‑wah effect with a pedal, a rear panel socket allows a Zoom FP01 to be plugged in (which may also be used to control volume).

The Distortion block has the most options, and for me, it's the best part of this little box by far. There are eight basic guitar voicings to choose from, ranging from strictly clean to ear‑shredding filth, and these voicings may be selected with or without the amp simulation. Normally, you have to use amp simulation, because a full‑bandwidth overdrive sound fed into a full‑range monitoring system invariably sounds like a bee in a coke can, but with this little unit, that isn't the case. Though they sound different, the settings both with and without amp simulation sound smooth enough to record. I have a feeling — although this isn't explained in the manual — that the digital effects operate at a very low bandwidth, to match that of the electric guitar. Because of this, the analogue distortion is filtered via the digital converters. More tone control is included in the Distortion section, and you can also switch in Zoom's own ZNR noise reduction circuitry to remove the hiss and hum that inevitably fills the gaps between notes when you're using very high overdrive levels.

The equaliser block is configured as a 4‑band EQ comprising Low, Mid, High and Presence parameters, and cut and boost is provided in all ranges. Following close on the heels of the EQ is a chorus/flanger which can be set to work as a chorus unit, a flanger or a doubler for producing slapback, ADT‑like sounds. Here, control is provided over rate, depth and feedback.

The final module is dedicated to reverb and delay, though you can only choose one or the other. At maximum, you have 420ms of delay at your disposal, and this setting produces a sound much like a classic spring reverb — except, of course, that it doesn't go 'thwongggg' when you kick it.

If you've used a Zoom processor before, the overdrive sounds are immediately recognisable, and there are plenty to choose from, including vintage fuzz and metal stack sounds. On the more subtle front, there are also one or two bluesy sounds, but this box works best when it's screaming.

After being used to top‑end effects, the digital section of this unit was, I felt, initially disappointing, and I think that's mainly because of the reduced bandwidth. Even so, when you listen to the effects in context, I have to admit that they sound quite authentic. It's also odd hearing effects in mono, but you could soon spice up the output by adding a little stereo reverb of your own from an external processor. The maximum reverb time is actually rather short, but as I mentioned earlier, it sounds very much like a spring, which is no bad thing for guitar use. I rather liked the soft and crunchy delay too, but I felt the chorus effect was too flaccid to help the sound along much.

Like the proverbial curate's egg, this product is good in parts — and given the attractive price, it shouldn't be criticised too harshly. My main gripes aren't aimed at the quality of the effects, but at the large disparities in level between some of the factory presets, and at the kinds of clean sounds you can get. Again, I suspect this is all down to effects bandwidth, but I found all the clean sounds rather too dull for my liking — and they don't come close to those available on the mid‑priced Zoom boxes. On their own, the effects sound rather lifeless and strained, and the fact that they are in mono means you get none of that wonderful sense of space and movement you'd expect from a stereo chorus or reverb unit.

But while some of the effects may be lacklustre, the palette of powerful‑sounding overdrive voicings more than makes up for it. If the effects are used to add a gloss to the basic sounds rather than to form an integral part of what you hear, they're fine, and for most classic guitar sounds, this is exactly what you want. If you're working on a budget and your main need is to create rock or blues sounds, then you won't go far wrong with this little box of tricks — it's an ideal companion for a Portastudio or similar setup. On the other hand, if you demand something more, and you like your effects spread thickly, buy the next Zoom up in the range.

All the available parameter names are displayed in a printed matrix on the top panel, while the parameter values are shown in the two‑digit LED window which normally provides patch and bank information. Cursor buttons steer LED markers along the bottom of the rows and up the side, so you can get a fix on the parameter you're changing, and simple up/down buttons do the rest. Because the number of parameters is relatively small, programming and editing is very fast and simple, but you may find that having only 12 user memories is a touch limiting.

An excellent budget solution for those wanting to get instant, recordable rock guitar sounds, but less satisfactory for those guitar players wanting sophisticated effects.