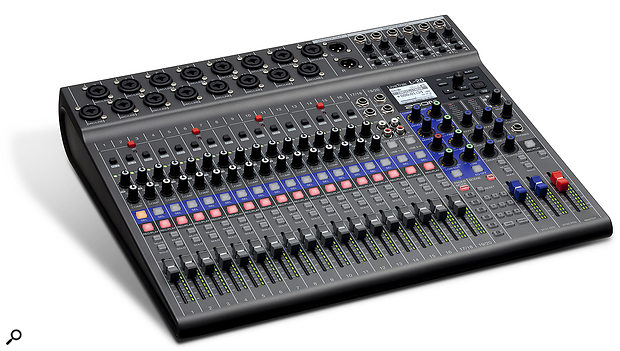 The LiveTrak L‑12 ticked a lot of boxes for a lot of people. Could the L‑20 tick the rest?

Zoom are a company who put a lot of thought into understanding the needs of musicians, and this is very apparent in their LiveTrak L‑12. An innovative combination of USB audio interface, digital mixer and multitrack recorder, the L‑12 is a very effective option for bands who want a single device to handle small-scale live-sound duties, tracking sessions and computer mixing. I was fortunate enough to review the L‑12 in SOS April 2018 and came away highly impressed.

Perhaps because I liked it so much, however, I couldn’t help thinking what Zoom could add to make the L‑12 even better. More tracks would be lovely, for example, as would the ability to reverse signal polarity. Solo buttons and remote control from an iOS device would take the mixer to a new level of usefulness, and I could wish for the ability to tap the recorded signal prior to each channel’s compressor... Still, if wishes were horses, beggars would ride.

The arrival of the UPS van at SOS Towers is not usually attended by a clatter of hoofbeats, but with the L‑20 Zoom seem to have answered nearly all my wishes. The designers have responded, with amazing speed, to customer and reviewer feedback on the L‑12 to produce an expanded version which brings more tracks, solo buttons, remote control and more flexible signal routing, along with many other oft-requested features.

In many respects, such as the operation of the recorder and audio interface driver, the L‑20 is identical to its predecessor, so rather than repeat detailed descriptions, I’ll refer interested readers to my review of the L‑12 (SOS April 2018).

Physically speaking, the L‑20 is somewhat deeper and slightly taller than its smaller brother, but the same width. Given that it boasts eight more mic inputs and mixer channels, a second effects engine, additional monitor outputs and a full set of solo buttons, this means the top panel looks more crowded, with the faders much closer together. Thankfully, though, this doesn’t have much impact on the ergonomic aspects of the design, and it remains simple, intuitive and fast to use. My only quibble is that it’s hard to find space to attach a scribble strip to label the channels. 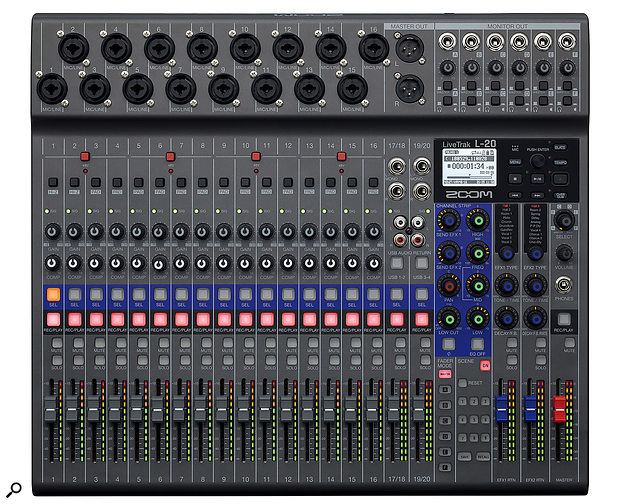 To squeeze in the additional eight mic inputs, Zoom have staggered the ‘combi’ XLR/jack sockets, which is actually quite helpful in terms of keeping track of what’s plugged where. As on the L‑12, the first two of these can operate as high-impedance inputs for directly connecting electric guitars, while the remainder all have switchable 26dB pads. In combination with the 44dB gain range of the channel trim pots, this gives them an impressive 70dB gain range. Phantom power is switched in four blocks of four inputs, which is a compromise I found easy enough to live with. Very few multi-channel audio interfaces in the same price range have such flexible preamp arrangements, and I would reiterate that these are also very good-sounding devices, a world apart from the cheap and cheerful preamps found in some older Zoom products.

As on the L‑12, each mixer channel has a one-knob compressor. When I reviewed the earlier unit, this was apparently hard-wired into the signal chain directly after the preamp, meaning that it wasn’t possible to have the compressor in the signal path without its being applied to the recorded signal. Zoom have now added a global system option that positions the compressor at a later point in the chain, after the signal is sent to the recorder. For most purposes this strikes me as a much more useful arrangement.

The other processing available on each channel has also been beefed up. As before, you apply this processing by selecting a channel as the focus for a single set of channel-strip controls, but these controls now include two effects sends, a variable rather than fixed high-pass filter, and a polarity reversal button.

Most of the effects are the same as on the L‑12, but they are divided between two independent engines rather than one, each with its own stereo return. EFX1 presents more generic reverb treatments, while EFX2 offers additional hall, room and vocal algorithms plus several delay and chorus effects. When I reviewed the L‑12, the effects were audible only on the main outputs, but Zoom have since issued a firmware update that allows them to be heard at the monitor outs too, and this is also the case on the L‑20.

Now Hear This (And This… And This…)

The monitor outputs have also been the focus of attention from Zoom’s engineers. The L‑12 was already unique in having five headphone outputs, each with its own independent cue mix, but Zoom have taken things several steps further on the L‑20. It’s now possible to create up to six independent cue mixes, each with its associated TRS quarter-inch jack socket. As before, these can be individually switched to pick up either the associated cue mix or the main mix, but the really neat addition is the set of six buttons that convert each of these monitor outputs from a stereo unbalanced headphone output to a mono, balanced line-level output that can feed a stage monitor.

And it doesn’t stop there, because there’s now a seventh headphone output in the master section of the mixer. Intended for the engineer’s use, this can’t act as a line-level out and doesn’t have its own cue mix. What it has, handily, is a rotary control that allows it to pick up either the main mix or any of the six cue mixes feeding the other headphone outputs, providing an instant way for the engineer to check what everyone else is hearing.

Best of all, the master-section headphone output also makes possible the feature that was probably top of my wishlist on the L‑12. In addition to mute, select and record/play status buttons, each mixer channel (including the effects returns) now has its own solo button. Engage solo on one or more channels and the main and cue mixes are unaffected, but the master headphone output is automatically switched to pick up a PFL bus, enabling the engineer to check individual sources without disrupting what anyone else hears. It’s not the most flexible solo function of all time, but it’s beautifully simple, very intuitive and works in exactly the way you’d want it to in most conceivable L‑20 use cases.

If the rear panel looks familiar, that’s because it’s almost identical to that of the LiveTrak L‑12, but it also caters for an optional Bluetooth dongle for remote control via iOS devices.

Finally, although the rear-panel socketry is largely the same as on the L‑12, there’s an additional socket into which something called a BTA-1 can be inserted. This is a Bluetooth dongle that enables communication with an iOS device, allowing the L‑20’s mixer to be remote controlled using a free app. Unfortunately the BTA-1 was not supplied with the review unit so I couldn’t test this, but it’s a concept that is familiar from many other digital consoles and has obvious benefits in a live scenario. Alas, though, it’s still not possible to press the L‑20 itself into service as a controller for software running on an attached DAW.

As I mentioned earlier, there are many aspects of the L‑20’s operation which are identical to the L‑12. So, for example, the recorder functionality appears to be exactly the same (albeit that the controls are tucked away in a slightly less convenient part of the top panel), and the USB driver simply presents more inputs to your DAW. There are the same compromises, such as the unbalanced line inputs that share mixer channels with the USB returns from the computer, the digital master fader that goes above unity, and the fact that 96kHz recording is available to an SD card but not over USB. There are the same plus points, too, most notably the ability to record simultaneously to an SD card and to an attached computer for added redundancy. And there are some of the same limitations, if that’s what they are, including the inability to name tracks and files, the omission of any editing facilities and the fact that you can’t save mixer scenes within Projects.

To my mind, though, most of the remaining negatives are more or less trivial in normal use. With the L‑20, Zoom have developed their LiveTrak concept to the point where it is pretty much fully realised. Yes, you could wish for longer, motorised faders, digital I/O, a larger screen with waveform display, sync options and so forth, but then you’d be talking about a much more expensive product with a different focus and potential market. And while there are other mixers and recorders which appear, on paper, to offer similar functionality, I have never yet come across anything that meets the needs of gigging bands and location recordists quite as elegantly or as completely as the LiveTrak L‑20. It really is a case of turn up, plug in and press Record. The L‑20 offers an almost unbelievable set of features for the price, in a streamlined package that is a pleasure to use. In this case, wishes aren’t just horses, they’ve grown wings too!

Announced but not yet shipping at the time of writing, the obvious competitor to the LiveTrak L‑20 is Tascam’s Model 24. This too combines USB interfacing and built-in multitrack recording, with a similar I/O count, but the mixer section seems to be analogue rather than digital, employing old-school aux sends rather than fader layers to generate cue mixes. The Model 24 has only two monitor sends, a single headphone socket and one effects generator, while there are no pads, and phantom power is switched globally. On the plus side, however, it features 100mm faders rather than the L‑20’s 60mm ones, as well as a graphic EQ for the master outputs, separate control room, main and sub outputs, insert points on inputs 1/2 and the ability to route up to 22 DAW outputs into the mixer for hands-on balancing. It certainly looks an intriguing product, and we await its arrival at SOS HQ with interest.

Zoom have built on their innovative L‑12 to create a powerful yet beautifully focussed device that is probably the most complete all-in-one tracking, mixing and monitoring option available for bands and location recording engineers at the price.