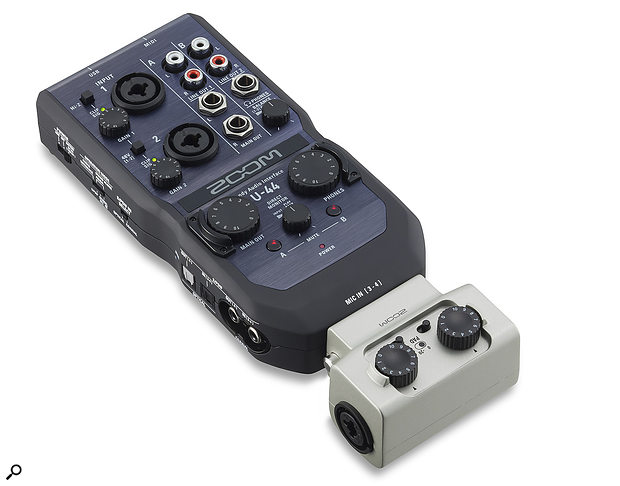 The U44 with the optional EXH6 preamp attachment.

More than just an interface, Zoom’s U-44 is expandable via a range of snap-on accessories.

The U-44 is designed with portability and versatility in mind. It’s a four-in/four-out interface with a range of analogue and digital connections, although unusually, only two analogue inputs are available straight out of the box. A range of snap-on accessories originally intended for Zoom’s H-series field recorders allow a number of additional options for the remaining two analogue inputs. These include X-Y and M-S stereo microphones, a shotgun microphone and a dual mic preamp. The U-44’s form factor shares similarities with a field recorder too; the interface is pitched towards project studios and live/mobile recording, paired with a laptop or iPad, but will perhaps win friends in the location sound industry too. In this review we’ll take a look at the U-44 and two of the optional input accessories. In addition, two smaller Zoom interfaces in the range will be considered: the U-24 (an interface with fewer in/outs that shares the same case as the U-44) and the U-22 (an ultra-compact interface with a single microphone input).

Pulling the U-44 out of its box, two things are instantly noticeable: the attractive design of the case and how light in weight the interface is. Switches and controls feel positive, but tend towards being a little flimsy in places and the unit screams out for things to be plugged in to stop it moving around the desktop. On the top panel, two preamps offer 43dB of gain and there’s a single (switchable) instrument input. Rotary gain controls offer level setting, with basic LED metering showing activity and overload for each preamp. There are two stereo line outs: one pair with jacks and RCA, plus a further pair of RCAs, specified with the gigging DJ in mind. These four outputs offer, for example, the possibility for multiple sets of monitor speakers or a main stereo output vs cue/alternative output in a live situation. Beneath the headphone socket, a balance control determines the mix between computer playback signals 1-2 and 3-4 (with 3-4 being routed to both the headphone socket and second pair of line outs). On the lower part of the panel, there are mute switches for both the main outs and second line out pair/headphones, plus a dial to attenuate the volume of the main outs. A direct monitor pot controls the balance between input and playback signals, and there’s another master dial for the headphone/line outs 3-4 level. Meanwhile, around the front, the Mic In connector can be paired with the series of optional mic modules. These either snap straight on to the interface or the user can purchase an extension lead and mic stand mount. 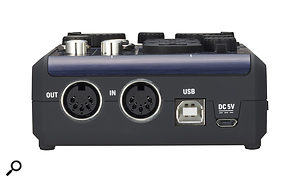 The left-hand side panel carries the stereo digital ins/out. Digital outputs duplicate analogue outputs 1-2, whilst the digital inputs are designated as inputs 3-4 when no attachments are plugged into the Mic In connector. An operation mode switch toggles between the U-44 functioning as a standard audio interface or a stand-alone stereo preamp/converter (limited to a 48kHz maximum sample rate). Finally, the power switch toggles between bus, battery or 5V DC power but also can be used to turn the unit off — most USB interfaces do not enjoy such a luxury!

Getting up-and-running with recording is a breeze, since no additional software is required aside from a driver for Windows users. Ableton Live Lite 9 is bundled with the interface. This inclusion is a useful starting point for electronic music and live applications, but perhaps not the most natural choice for users wanting to concentrate on audio recording. I bypassed Ableton and went straight to testing the U-44 with both Reaper and Logic Pro, and it performed very well indeed. I found the latency times reported to the DAW software to be extremely accurate (within 0.1ms), amounting to an output latency of 2.8ms at a buffer setting of 32 samples. With immediate triggering of virtual instruments, there were no clicks or pops interrupting the audio stream even at the lowest buffer size. D-A conversion is very respectable too: test tracks monitored on headphones were pleasing on the ears, with good transient detail from toms and snares and slightly better articulation of low-frequency instruments when compared to my Mac’s on-board sound.

The U-44’s preamps are clean and quiet, and the controls all very simple to use. It was easy to get a strong signal out of the interface to my 55Ω headphones, with the correct balance of input and playback signals in the direct monitor mix. The ability to simply mute studio monitors (plugged into line outs 1-2) whilst recording is a big bonus — it’s a shame that so few audio interfaces at this price include such a function. The second mute switch is handy for cutting blaring headphones whilst listening back on speakers, and the master volume dials make it easy to set the respective levels of the two output pairs/headphones. As ever, though, I’m frustrated by the lack of a second headphone output. A device capable of recording four simultaneous inputs is most likely going to need to provide headphone monitoring for more than one musician at a time, although this appears to be one too many jack sockets for the case to bear!

The XYH6 mic with optional stand and cable.

The two Mic In accessories I tested were also impressive, considering their fairly modest prices. Being a modular system of sorts, I relish the idea of buying the interface initially and then extending functionality with add-ons to suit budget and intended applications. Both accessories were solidly constructed, adding some welcome weight to the interface and snapping onto the connector very securely. The dual preamp tested (EXH6) affords the U-44 two further low-noise XLR/line analogue inputs (which override digital inputs 3-4 when connected) and alternatively, a stereo mini-jack line input is also provided on this module. Unlike the on-board preamps, there’s also a -20dB pad present, making them more suitable for applications such as stereo overheads above a drum kit.

The XYH6 is a stereo X-Y condenser mic capsule with options of 90- and 120-degree angles. Again, self-noise levels are low and the capsules performed really nicely when I tested them recording student recitals within a hall acoustic. I didn’t notice anything unexpected in the frequency response and whilst the XYH6 doesn’t approach the quality of an expensive pair of small-diaphragm condensers, it is certainly very useable for room ambience, field recording or capturing an acoustic gig. With a very reasonable price, such an accessory is very attractive indeed. An extension cable with mic stand adaptor is available separately and this would be incredibly useful in regard to placing the mic capsules higher up and away from the interface and computer. Without this, the mic capsule is mounted to the bottom edge of the case and you’d need to place the interface in a vice-like mount (or Zoom’s own mounting bracket, available separately) for it to be more practical for recording. Unfortunately, there’s no tripod/mic stand thread on the bottom side of the case as there tends to be on field recorders.

All in all, the Zoom U-44 offers an intriguing feature set suited to a number of contrasting applications in the studio and out in the field. Monitor controller features, multiple outputs, a quirky desktop case and good sound quality make this a strong contender in the budget four-in/four-out market. Although it lacks a couple of analogue inputs out of the box, the range of keenly priced microphone modules more than makes up for this. If the specifications fulfil your needs, I wouldn’t hesitate in recommending the U-44. 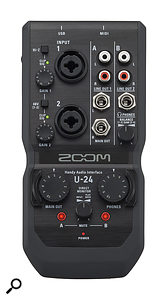 The U-24 has fairly similar specifications to the U-44, including the preamps and maximum recording qualities. It utilises the same case and retains the two pairs of analogue outputs with mute switches, but is limited to two analogue inputs. It doesn’t have either digital in/out or the Mic In connector for expanding the number of inputs.

For users who don’t require four analogue inputs, but do have the need for two mixes/monitor feeds, this model is well worthy of consideration, since the ergonomic ‘desktop’ style case, decent converters and monitor controller functions do set it apart in a crowded marketplace. 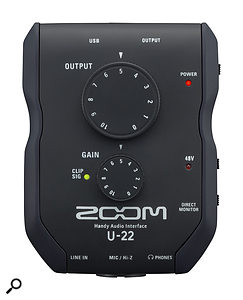 The U-22 is an extremely compact device with a single mic/instrument ‘combi’ connector, plus a handy fixed-gain stereo line input on mini-jack (which overrides the XLR/jack input when in use). Headphones are also on a mini-jack port and the two line outputs are on RCA connectors. A large volume dial, whilst slightly light to the touch, is the most notable control.

The U-22 has the same power options and maximum recording qualities as the other two interfaces, but no MIDI or mix control for direct monitoring (just a simple on/off switch instead). With direct monitoring turned on, the headphone output could be stronger; it delivers just 10mW at 33Ω compared to the 30mW output of the U-44/U-24 at the same load. Used with lower-impedance headphones, the U-22 is a great choice for no-nonsense mobile and demo recording.

A curious, versatile audio interface that should win friends for project studio and mobile applications alike. Modular expansion options are the icing on the cake.