Q. Can I make a 'Subkick' mic from any speaker cone? 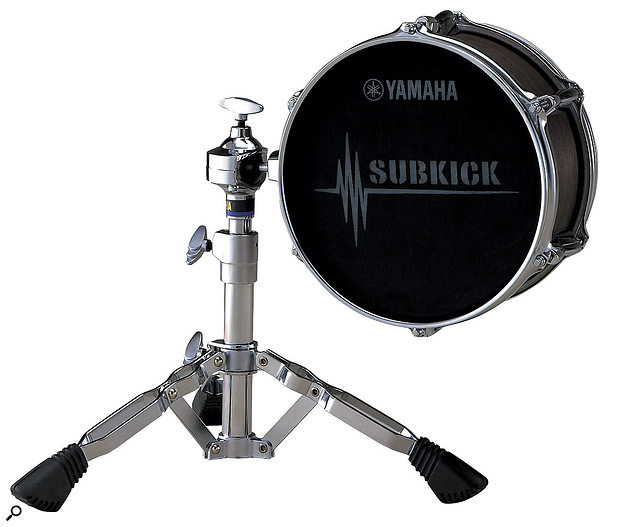 It can certainly be useful, but does Yamaha’s classic Subkick have more in common with a synth than a conventional microphone?

Yamaha no longer make their Subkick drum mic, so I was thinking of making my own from an old loudspeaker. Does it have to be an NS10 driver? I also wondered whether a bigger woofer would allow me to capture more sub-bass?

SOS Technical Editor Hugh Robjohns replies: The short answers are no, and not in the way you think it should! Most people think the Subkick works like any other kick-drum microphone, but that it somehow captures mystical ‘sub’ frequencies from the kick-drum that other mics just don’t hear. After all, it’s so big and all those other kick-drum mics are puny little things, so they can’t possibly capture low frequencies which we know are big because they have huge wavelengths.

However, microphone diaphragm size is completely irrelevant when it comes to a microphone’s LF response (it can affect the HF response though). The reason is that a microphone works as a pressure (or pressure-gradient) detector to sense the changing air pressure at a point in space. It doesn’t matter how slowly the air pressure changes, or how big or small the pressure change is (within reason). Small-diaphragm omnidirectional (pressure-operated) microphones can be built very easily with a completely flat response down to single figures of Hz, if required, and most omnis are flat to below 20Hz. Directional (pressure-gradient) mics aren’t quite so easy to engineer for extreme LF performance (because of the mechanics involved in a pressure-gradient capsule), but a response flat to below 40Hz is not unusual. The fundamental of a kick drum is generally in the 60 to 90 Hz region, so well within the capability of any conventional mic.

The confusion and misplaced assumption about needing a large-diaphragm probably comes from the fact that a large diaphragm (cone) is required to move sufficient air to generate useful acoustic power at low frequencies from a loudspeaker. But the physics and mechanics involved are entirely different and simply don’t translate to the operating principles of a microphone.

Returning to the Subkick idea, basically what is on offer is a relatively high-mass diaphragm (cone) with a huge copper coil glued on the back, adding more mass and inertia. The whole assembly is horrendously under-damped and almost completely uncontrolled. Not surprisingly, when employed as a microphone it has what under normal circumstances would be an appalling frequency response, completely lacking in high-end. What is important, though, is the very poor damping, because this means that the diaphragm (cone) will tend to vibrate at its own natural resonant frequency when stimulated by a passing gust of wind — such as you get from a kick drum. So really, the Subkick isn’t capturing the kick drum’s mystical subsonic LF at all — it’s basically generating its own sound. In other words, what we actually have is an air-actuated sound synthesizer, not an accurate microphone!

Sure, the initial kick-drum transient starts the diaphragm in motion and the coil will generate an output voltage that approximates to the acoustic pressure wave (but with a very poor transient response). But after that initial impulse of air has passed, the diaphragm will try to return to its rest position, oscillating back and forth until the energy has been dissipated in the cone’s suspension. It is this ‘decaying wobble’ that generates the extended low-frequency output signal that most assume to be the mystical lost sub-harmonics of the kick drum. In reality, the output signal of the Subkick is not related to the kick drum’s harmonic structure in any meaningful way at all — it’s overwhelmingly dominated by the natural free-air resonance characteristics of the loudspeaker driver.

Now it just so happens that the size and natural free-air resonance of the NS10 driver is about right for resonating with the fundamental of a typical kick drum, thus delivering a nice low-end boom that complements the sound of some kick drums rather well.

I suspect that most people use Subkicks either because they’ve read about or seen someone they admire do it, or because the kick drum they want to record isn’t delivering the sound they need, want or expect. The latter is usually because it’s an inappropriate type of kick drum, it hasn’t been tuned or damped properly, it isn’t being played very well, or a standard mic hasn’t been placed very well. Having said that, if a Subkick approach creates a useful sound component that helps with the mix, that’s fine — just don’t run away with the idea that it’s capturing something real that others mics have missed!

Returning to the question of which speakers to use, the answer is whatever delivers the kind of sound you’re looking for! As I said, the NS10 driver just happens to have a free-air resonance at the right sort of frequency (and low damping) to resonate nicely in front of a kick drum. Early adopters placed the driver directly in front of the kick drum, open to the air on both sides, but Yamaha’s commercial version actually placed the driver inside what was effectively a snare-drum shell. Just like a speaker cabinet, the enclosure alters the natural resonance frequency and the damping characteristics of the driver, changing its performance (and tonality) substantially.

So, if you want to make your own Subkick, you need to look for a bass driver with a suitable free-air resonance characteristic and damping to generate an appropriate output signal. If you plan to build it into a cabinet, the same kinds of speaker-design calculations will apply to deriving the appropriate size of enclosure and tuning. In practice, trial and error works just as well and can be good fun, especially if you can pick up some cheap old hi-fi speakers with blown tweeters from a car boot sale!

To wire the thing up, you simply need to connect the hot and cold wires of a balanced mic cable to the hot and cold terminals of the speaker, and the cable screen can optionally be connected to the metal chassis. Assuming neither voice-coil terminal is shorted to the metal chassis, it should be fine with phantom power. The output from most speakers used in this way is usually pretty hot, though, so, at the very least, set the preamp for minimum gain, and expect to use the pad. In many cases you’ll need an external 20dB in-line XLR attenuator.