Q. Can I use my aux send/return loop, or do I need insert points?

I'm trying to hook a Behringer Denoiser and an SPL Vitalizer MK1 into an older-model Alesis Multimix 16USB mixing console, working with the sends and returns. I purchased two sets of send/Y-leads, which are obviously TRS single-to-dual monos, since the desk is a single jack send, but double on the returns. Now, when I'm fully set up on both units, and I plug in fully, I am missing one channel on each. I'm using the less reliable method of inserting the Y-lead plug halfway into the insert until there is a springy 'click' feeling and all is fine. Do I need to purchase a different-style lead, a TS, and not a TRS? I've not used many outboard effects before in send modes, but am digging out old gear that may still be of use. 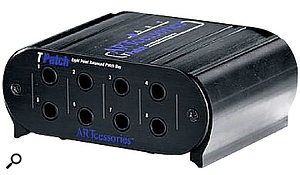 If your console doesn't have channel-insert sockets and you want to be able to process individual source channels, the easiest solution would be to use a patchbay.

SOS Technical Editor Hugh Robjohns replies: Hooking up the Behringer Denoiser and the SPL Vitalizer MK1 into the Alesis Multimix should be easy enough. The first port of call is the manual, to check how the mixer is wired. In this case, there are no channel or mix insert points, but there are two mono aux sends (called Aux A and Aux B), and both are wired as impedance-balanced outputs. That means that there is a signal on the tip connection, but no signal on the ring connection.

The mixer also has two stereo balanced effects returns (called FX Return A and B), although the B return socket is normalled from the output of the internal FX processor. Stereo FX Return A is wired such that if you only plug something into the left channel, it is normalled across to the right as well. FX Return B does not have that facility. As I recall, the original stereo Vitalizer had both balanced XLRs and unbalanced quarter-inch TS sockets for the inputs and outputs, and the Behringer SNR2000 two-channel Denoiser has both XLR and TRS sockets on the inputs and outputs, wired balanced, but usable unbalanced.

That's physically what is available, so how should things be connected? Firstly, in terms of the send/return Y-leads you've purchased, I think you've misunderstood what's going on here. Each aux output is a mono send. The effects returns are stereo returns. This is quite normal because, typically, you'd be patching a stereo reverb across them: taking a mono input to the reverb and creating a stereo return signal, for example.

But, fundamentally, both the Vitalizer and the Denoiser are really insert processors, not send-return processors. They are both designed to work directly on the source signal, and the processed signal is then mixed with all the other console inputs. Neither the Vitalizer nor the Denoiser generates an independent return signal — like, say, a reverb does — that you would want to mix alongside everything else. Basically, these tools are simply not designed to be used in an aux-send/effects-return configuration.

If you want to be able to process individual source channels through the Vitalizer or Denoiser, and the console doesn't have channel-insert sockets (and yours doesn't), the easiest solution would be to invest in a TRS patchbay. You could then manually patch the source signals either directly to the mixer inputs, or to a processor input, and then patch the processor output back to the appropriate mixer input. You could even patch the stereo mix out via the Vitalizer or Denoiser before sending it on to your recording and monitoring chain. That would be a far more practical and sensible solution.