Q. Can you recommend a low-cost heavy-duty mic stand? Skip to main content

Q. Can you recommend a low-cost heavy-duty mic stand?

I have the usual selection of Stagg and anonymous mic stands, which are fine most of the time, but I now have some mics that are really pretty heavy (SE Electronics' Gemini III, for instance) and none of my present stands really cut it. Of course, all mic stands are described as 'heavy duty', but I'm looking for something that can hold really heavy microphones reliably and with the minimum of hard twisting of small knobs and so on.Of course, SE make a suitable stand, but I'm not sure I could justify £230$500 on one mic stand. Can you suggest anything usable below, say, £100$150? 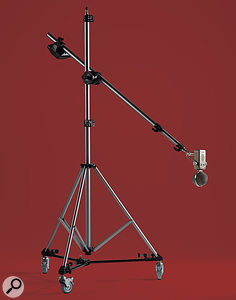 An expensive mic stand might seem like a waste of money, given that most still suffer from 'droop', but some very well-engineered stands exist that do not suffer from this problem. This stand from Sontronics, for example, is more than worth its cost, given that it is protecting far more valuable mics that could last you a lifetime if well looked after.

SOS Technical Editor Hugh Robjohns replies: If you can use a mic stand without a boom arm — so, just the vertical pole — there shouldn't be any problem, because even budget mic stands should be able to support the heaviest microphone without too much trouble. The real problem comes when trying to hang a heavy mic on a boom arm, because most ordinary mic stands don't have anything like a sufficient counterweight mass to properly balance even moderate mics, let alone big, heavy ones. As a result, the boom arm clutch has to resist almost all of the rotational force created by the leverage of the heavy mic at the end of the boom and, frankly, most just aren't up to the job. The inevitable consequence is the annoying 'droopage', and the more you try to tighten the clutch to prevent it, the quicker the whole thing wears out (or breaks), and quickly becomes droopy even when supporting light microphones!

The correct engineering solution is to properly counterbalance the weight of the microphone so that there is no net rotational force at the boom clutch. That then allows the clutch to do what it was intended to do — stop the boom arm from moving — rather than have to accommodate the entire rotational leverage. The cheap and cheerful solution is to tape or affix some additional weight to the end of the boom arm; you need enough to balance your heaviest mic at the maximum boom extension you plan to use. However, this will be ugly and may not be as safe as it should be, and you certainly don't want the weight to fall off onto someone's foot... or the mic to crash onto the floor shortly afterwards!

I know the idea of spending £200-300$500 on a mic stand seems silly, but, to be honest, I think it's worth it for peace of mind when you're working with mics that cost £1000$1500 and potential personal injury insurance claims! Moreover, mic stands in this cost bracket generally live forever, because they are so well designed and rugged, which means that the amortised investment is actually very low.

The SE mic stand is surprisingly stable, but it is a kind of hybrid of a reverse-engineered Keith Monks boom arm and clutch from the 1970s and a drummer's cymbal stand. It does have a heavier counter-weight than most budget stands, but it's still not an ideal solution, to my mind.

The most cost-effective and properly engineered stand I've come across to date is the Sontronix Matrix 10. It's not the prettiest or most compact stand on the planet — it's basically a modified photography lighting stand — but it has cogged clutches that definitely won't slip, a very sensible counterweight, removable wheels, and a handy drop-arm. It's very secure, totally reliable, and there's nothing to break, so it will live forever. I reviewed it in the August 2010 edition of Sound On Sound (see the full review at /sos/aug10/articles/sontronics-matrix-10.htm).

If you want something in matt black and with a much smaller footprint, I've just been reviewing the Latch Lake MicKing stands, which I have to say are utterly brilliant. However, they are also pretty expensive, because they are very well engineered, and imported from the US. The review is soon to appear in Sound On Sound, but these stands have a sensibly massive counterweight on the boom arm, a very heavy, but compact, base (with transport wheels to make it easy to move the stand to a storage area), a nice drop-arm system, and really ingenious lever locks and clutches that are adjustable for both tension and ease of use. These are very solid and impressive stands and well worth the investment, in my view.