Q. How important are microphone self-noise and SPL figures? Skip to main content

Q. How important are microphone self-noise and SPL figures?

I am interested in the Shure SM7b mic and have been looking at its specifications, but the Shure web site seems to be missing information for self-noise and maximum SPL levels. I've heard people saying that the SM7 can handle up to 180dB SPL! I'm curious as to whether or not that is true (probably not) and if it is anywhere near that, I'm assuming it's because it's got some kind of -30dB switch on it or something crazy like that. Can you shed any light on this? 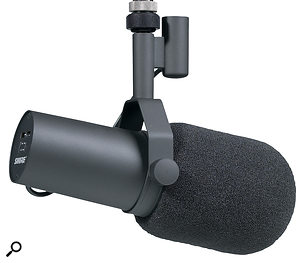 You won't find self-noise specifications for the Shure SM7b, as it is a dynamic (moving-coil) microphone. The only self-noise generated is the thermal noise from its own output impedance.

SOS Technical Editor Hugh Robjohns replies: The reason you can't find those specific specifications is because the SM7 is a dynamic (moving-coil) microphone. In fact, you probably won't find those specs for any dynamic mic from any manufacturer (other than dynamic mics with built-in buffers or gain stages), because they are largely meaningless and pointless figures.

The self-noise generated by a moving-coil microphone is only the thermal noise generated by the mic's own output impedance, which is essentially just the DC resistance of the moving coil itself, plus that of a humbucking coil (if employed) and the output transformer (if present). This noise contribution is negligible, and will be utterly swamped by the receiving preamp's own electronic noise.

The maximum SPL level for a dynamic mic is determined mainly by the range of mechanical movement afforded to the coil, and that will be more than high enough for any conventional application. So it's not unusual to find professional dynamic mics that are capable of over 150dB SPL (for one percent THD), albeit with rapidly increasing distortion towards the limits, and with mechanical clipping occurring when the diaphragm and/or coil hits the end stops at 170 or 180 dB SPL.

In contrast, the self-noise and maximum SPL figures are quoted for all electrostatic mics (capacitor and electret) because the impedance converter electronics built into the microphone determine the mic's dynamic range capability, the lower limit being set by the amplifier's self-noise, and the upper limit by the amplifier's distortion or clipping.