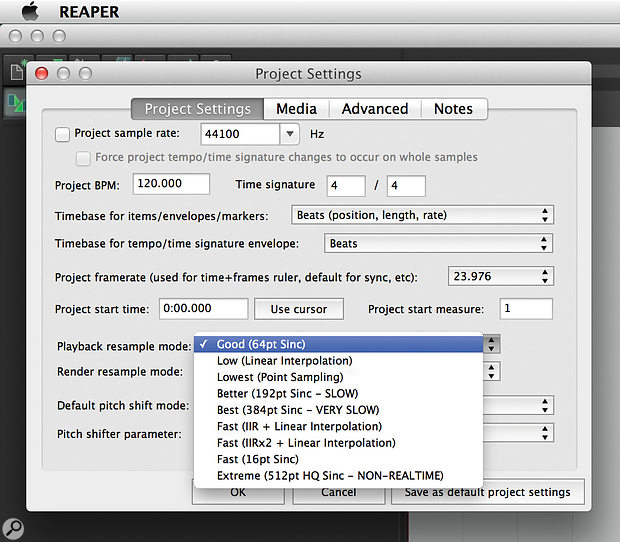 I can’t find good explanations about the ‘Playback Resample Mode’ options available in Cockos Reaper, specifically the difference between the Good (64pt Sinc) and Better (192pt Sinc — Slow) modes. Also, the default track mixing bit depth is ’64–bit float’. I guess that’s because most CPUs are now 64–bit engines, but how does this setting relate to my outboard converters, which all work at 24-bit? Michael, via email

SOS Technical Editor Hugh Robjohns replies: The ‘Playback Resample Mode’ options relate to the application of automatic sample–rate conversion when importing an audio file with a different sample rate from that of the current project, for example when importing a 24–bit, 96kHz source file into a 44.1kHz project. When sample–rate conversion is applied to a digital signal, the original audio waveform effectively has to be reconstructed from the existing samples, so that the correct amplitudes at each of the (new) required sample points can be calculated.

‘Sinc’ refers to a mathematical function which is intrinsically involved in reconstructing the original audio waveform from individual samples. In very simple terms, it describes how each sample contributes to the amplitude of the audio waveform between the sample points, both before and after each individual sample. There isn’t really space to get into the mathematics of the sampling theorem here, but if you want to know more I recommend Dan Lavry’s Sampling Theory white paper (http://lavryengineering.com/pdfs/lavry–sampling–theory.pdf).

The important point to note is that the Sinc function looks like an impulse with decaying ripples, which extend, in theory, forever, both before and after each sample, but always with zero amplitude at each sample point. Consequently, these ripples influence the amplitude of the entire reconstructed waveform and need to be taken into account when performing sample–rate conversion.

Calculating the Sinc contributions of every sample for every other sample is not practical in most cases, and so Reaper’s sample–rate conversion process can be optimised for varying levels of accuracy and speed. Performing the calculations for 64 sample points either side of the current sample gives good results, but extending that out to 192 sample points either side is more accurate (it achieves lower noise and distortion). However, it takes much longer because it involves significantly more computation.

Moving on to the internal ‘64–bit float’ mix engine, this is about maximising the internal dynamic-range capability to accommodate very loud or very quiet signals without degrading them. When a lot of signals are combined, the result is usually much louder than any individual source, so the DAW engine needs additional headroom to cope. In a similar way, changing the level of digital signals often results in ‘remainders’ in the calculation. Additional bits are needed to keep track of these remainders, to avoid degrading the signal while processing.

This additional dynamic-range requirement is achieved in different ways in different systems, and depends on the type of processing being applied. You’ll often see references to double– or triple–precision, for example (where the calculations are done with 48– or 72–bit resolution), and most early DAWs used 32–bit floating–point maths, which gives a notional internal dynamic range of something like 1500dB. Modern computer hardware is designed to work in a 64–bit operating system environment, and a lot of DAW software has followed suit for practical convenience. It just means an even greater internal dynamic-range capability, which makes internal clipping all but impossible and the noise floor of processing distortion impossibly small.

However, audio signals always have to be auditioned in the human world, and our ears and replay equipment can’t accommodate a dynamic range of more than about 120dB. A 24–bit system can (in theory) accommodate a dynamic range of about 140dB, so the industry has standardised on 24–bit interfaces, which are more than sufficient. The implication is that we have to ‘manage’ the (potentially) huge dynamic range signals created inside a DAW to make sure that they fit into the 24–bit dynamic range for real–world auditioning. That’s why DAWs have output meters that show clipping if the internal level is too high; it’s not the 64–bit floating-point signal in the computer that’s clipping, but the external 24–bit converter.