Q. Could I blend recordings made by two different mics at the same time?

I've got a Shure SM57 and a Rode NTK and I'm not sure which I should use on vocals. This got me wondering whether it would be a good idea to use both mics and blend to taste. Is that a good plan?

SOS Reviews Editor Matt Houghton replies: I get the impression that you've not really taken the time to systematically compare the results you get from the two mics, and haven't tried using both at once! The short answer is that either mic might work well for you, but using both together is probably a bad idea. 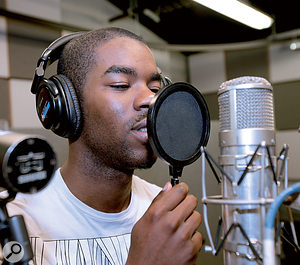 Although blending recordings from two nice-sounding mics may seem like a good idea, it would probably cause phase cancellation, so it's a far better idea to use a single mic that produces the sound you want.The difficulty in making specific recommendations for a vocal mic is that every voice is different, and the same voice might even come across differently in different keys and singing styles. Probably more vocal recordings are made using a large-diaphragm condenser mic (in which category I'd include valve mics, like your NTK), but plenty of people use dynamics like the SM57 too — as well as ribbon mics and even small-diaphragm condensers. You need to try recording your voice with each mic and sit back and listen to the results to decide what you do and don't like. For example, if the vocal is over-sibilant, the last thing you'll want is a mic that subtly enhances the sibilance region of the spectrum. Also, try singing at different distances from the mic, because if your voice lacks low-end, you can move a little nearer to benefit from the proximity effect of a directional mic, for instance. Just be aware that the further back you are from the mic, the greater the contribution the room will make to the recording.

Tempting as it is to think that because you like one aspect of one microphone and one aspect of another you should blend the results, this is likely to lead to phase cancellation with vocals, and thus a frustratingly inconsistent tone. This occurs because even if the vocalist is trying to stand in one place, they're typically not a stationary source in the way that, say, a guitar cabinet would be, and this means that the distance from the source to each mic is varying all the time.

If you're unhappy with the sound of either mic, and are confident that you're recording correctly (I've met more than one person singing into the back of a Rode), you'd be better off auditioning a few different mics and getting hold of the best one for your voice. We ran an in-depth workshop feature on this very subject a couple of years ago, and it's well worth you reading. You can find it at /sos/jul10/articles/vocalmics.htm.