Q. Do I need a professional setup to record on my laptop? Skip to main content

Q. Do I need a professional setup to record on my laptop?

I want to mic up my bodhran so that I can record what I am doing in Audacity, then play it back in order to hear where I'm going wrong, with the hope of improving my technique. One of the mics I've been recommended is an AKG C418 clip-on model, but I'm told it needs phantom power. What's this phantom power thing, and do you think I could achieve it without a fully professional recording setup?

I'm intending to record and play back from my PC laptop, but I can record to cassette tape if necessary. I also have a hi-fi amp, which I currently use to transfer the odd bit from vinyl and cassette into Audacity on my computer, should it be of use. 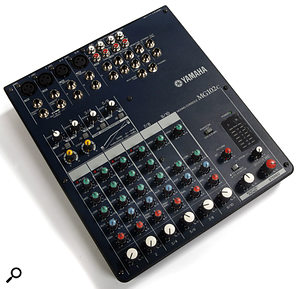 You don't need expensive gear to mic up the majority of instruments. This setup of an AKG C518 clip-on mic and a Yamaha MG102C mixer costs under £300, and is capable of producing great results. You can spend even less money if you go for budget brands... News Editor Chris Mayes-Wright replies: Phantom power is used to power specific types of microphones. Models such as the omnipresent Shure SM58 and other common handheld vocal mics don't need phantom power because they are dynamic — they operate like a speaker working in reverse, turning acoustic vibrations into electronic signals.

The AKG C418 (superseded by the new C518, pictured below) is a very capable condenser microphone that's often used for close-miking drum or brass instruments, due to its handy clip-on nature and gentle low-frequency roll-off. Its capsule (the bit that moves when sound waves hit it) is electrically charged, and requires a power supply to deliver this charge. So phantom power is sent from the mixer (or whatever the mic is plugged in to), down the microphone cable, and is used to polarise the capsule and also power other internal circuitry.

Phantom power is found on almost all modern mixing desks, professional or not. It's normally indicated by a button with '+48V' or 'phantom' next to it. The nominal supply voltage for phantom power is 48V, but some phantom power circuits only produce figures around the 30V mark.

To connect a mic to a phantom power supply, simply plug it in to the XLR inputs on the mixing desk, and switch the phantom power on. It's not good practice to leave phantom power on then plug the mic in, as this can cause surges when the cable makes an electrical contact with the microphone.

Hopefully that gives you a basic idea about what phantom power is. All you need now is some advice on how to acquire it! A cheap mixing desk is the obvious thing to go for, and you can get a usable one for under £50 and a more-than-half-decent one for around £70 — the Yamaha MG102C (pictured) was on sale for £69 at the time of going to press. At both of these price points, you'll get something that can be used for applications other than powering your AKG C418 (or C518, if you decide to purchase the new model), such as mixing three or four instruments and feeding their signal into a PA system. The cheapest mixers don't have phantom power, so make sure you get one that does! Any such mixer will have outputs that you can send to your cassette recorder, PC laptop, hi-fi amp, or main-stage PA system, for when you've perfected your playing technique!

If you just want to record into Audacity, and you don't need the other mixer paraphernalia, you can get an external audio interface — basically a soundcard that connects to your computer via USB or Firewire. If going down this route, make sure you choose an interface that has at least one microphone preamplifier and phantom power, for obvious reasons. All you have to do to record on to your computer is install the software drivers for the interface and make sure everything's connected correctly. Then, Audacity should be able to 'see' your incoming signal from the connected equipment. Interfaces cost anywhere from £40 to £1500, but you can get a decent two-channel model for just over £100.

As another alternative, you could get a single-channel microphone preampwith a line-level output that you could plug straight into your hi-fi amp or PC line input. Prices for these start at around £60.

Personally, I'd go for the first option I mentioned: a small mixer. It's the most flexible and cost-effective approach.