Q. How can I reduce hi-hat spill on my snare mic? Skip to main content

Q. How can I reduce hi-hat spill on my snare mic?

I've always had trouble with hi-hat bleed through my snare drum mic. I use a Shure SM57 on the snare, and if I try to boost the snare around 15kHz, the hi-hat stands out like a sore thumb. What's the best possible mic placement for the snare to reject the hi-hat as much as possible? 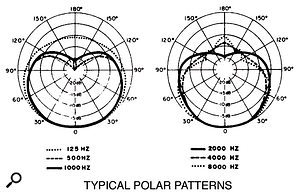 The Shure SM57, a popular choice when miking a snare drum, can be angled to achieve some hi-hat rejection. As shown in these polar pattern plots, the mic effectively turns into a hypercardioid over around 4kHz, so you should bear this in mind when aiming the nulls. SOS contributor Mike Senior replies: This is a perennial problem, and is the reason I rarely bother recording a separate hi-hat mic most of the time — you've usually got too much hat in all the other mics already anyway! At the risk of stating the bleeding obvious, first have a word with the drummer, because it may well be easier for him to rebalance his sound a little than for you to faff about with mics and processing for hours.

In terms of reducing spill while recording, any cardioid-pattern mic, such as the SM57, in theory should reject the spill best if you aim the back of the mic directly at the hi-hat. However, the SM57 actually becomes something like a hypercardioid at high frequencies, so you'll need to experiment with angles a bit to get the best rejection in practice. If there's any way you can get the hi-hat further away from the snare that may also help, if only by giving you the physical space to point the mic's derrière in a suitable direction.

You could also, space permitting, fix a piece of acoustic foam to a spare mic stand's boom arm and suspend it in the sight line between the snare mic and the hi-hat; typical acoustic foam is usually very effective at shadowing high frequencies. You might find that putting the kit on a bit of carpet helps as well, by reducing some of the high-frequency reflection from the floor. Some acoustic foam on the ceiling or nearby walls might achieve a similar effect, too, depending on how close these room boundaries are to the drums.

However, whenever spill is causing real problems, I tend to reach for a mic with a figure-of-eight pattern. This is because the nulls in a figure-of-eight mic's polar pattern are typically much deeper than those in the polar patterns of other directional mics (such as cardioids and hypercardioids), and are equally deep right across the frequency range. The only way you're likely to get a mic with a figure-of-eight pattern, though, is to use a condenser rather than a dynamic. (Ribbon mics also have this polar pattern, but it would be a soul braver than mine that would put one of these delicate creatures right next to a drummer, let alone right next to his or her snare!) If you decide to go this way, try aiming the mic right down at the drum, such that the mic's null plane takes in not only hi-hat, but also the toms on the other side. Foam on the ceiling would be particularly worth trying in this case, to stop the rear lobe of the figure-of-eight pattern picking up hi-hat and cymbal reflections.

Whatever you do, though, you'll probably still need to use some gating at the mix to aid the separation. Gate before you do any other processing, and try to use a gate which lets you tune its side-chain to the hi-hat frequencies for reliable triggering. If you've already done some of the work while recording, you shouldn't need to gate hard to finish the job, so if there is a Range control available, reduce this to 6dB or so for a more natural sound.