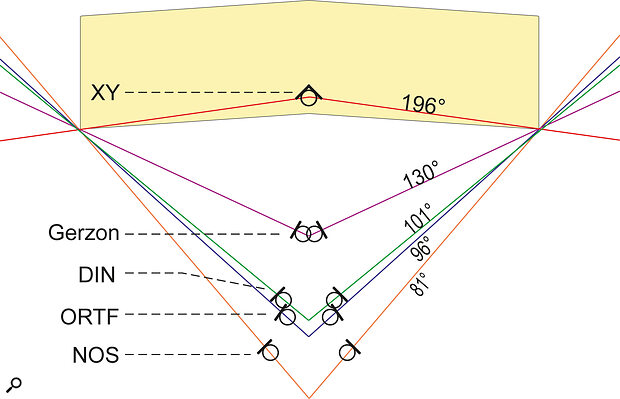 I was discussing stereo with someone recently who argued that since speakers are set at 30 degrees either side of our central listening axis, there is only “60 degrees of liberty in stereo sound”. However, I’ve seen stereo mic arrays, like X‑Y cardioids, that claim to capture 196 degrees of the sound stage. What’s the point if the speakers cannot reproduce the whole image?

SOS Technical Editor Hugh Robjohns replies: Your colleague is absolutely right, in that the stereo image presented by loudspeakers does normally occupy only a 60‑degree total angle in front of us. This is our ‘window’ on the captured sound stage, in much the same way the screen in a cinema provides a window into whatever world the film is showing us, despite only occupying a relative small angle of our vision. However, sometimes we see panoramic views across the screen, filmed through a wide‑angle lens, and sometimes we have close‑ups shot with a telephoto lens — and different stereo mic arrays have the same ability to capture wider or smaller real‑life sound stages and squeeze them into the space between the two speakers.

For a stereo mic array this ability is defined by the Stereo Recording Angle (SRA), which denotes how the area in front of a stereo microphone array is ‘mapped’ into that 60‑degree angle portrayed between the loudspeakers. For a coincident X‑Y array of cardioids with a mutual angle of 90 degrees, the SRA is, as you say, about 196 degrees, but what does that really mean?

In the same way that a photographer chooses lenses of different focal lengths to frame a picture in a specific way, we can do much the same by choosing different stereo mic arrays.

Well, imagine someone talking a few metres right in front of the microphone array. If we listen over a pair of loudspeakers their voice will be a phantom image coming from precisely midway between the two speakers. If they now start to move left (in an arc around the microphone to maintain the same relative distance) the phantom image will also move left, and if they keep moving their voice will eventually arrive at the left‑hand speaker. At that point the angle seen from the mic between the centre line and their physical position will be ‑98 degrees. If they then walk back the other way their voice will reach the right‑hand speaker at +98 degrees. So the total Stereo Recording Angle is 98 + 98 = 196 degrees. In other words, this particular stereo mic array can capture sound sources located over a very wide angle in front of it, and map that vast acoustic environment into the space between the loudspeakers in much the same way as a very wide‑angle lens can squeeze a huge panorama onto the cinema screen.

If we were to change the microphones’ polar patterns to fig‑8s and repeat the walk test, we’d find the voice would arrive at the loudspeakers when the talker was only around 38 degrees either side of the centre line, giving an SRA of about 76 degrees. So this variant of stereo array picks up a much smaller portion of the space in front of it, and can therefore be thought of as the audio equivalent of a telephoto lens.

And in the same way that a photographer chooses lenses of different focal lengths to frame a picture in a specific way, we can do much the same by choosing different stereo mic arrays. So, for example, sticking with coincident arrays, hypercardioids at 90 degrees would have an SRA of about 109 degrees, while supercardioids have an SRA of 136 degrees. But we can also change the SRA by altering the mutual angle between the two mics, or the spacing between the capsules — or both!

The logical next question is ‘why would you want a particular SRA?’ Well, consider trying to record an orchestra where the stereo image from the speakers has the back desk of first violins almost fully left and the back desk of basses almost fully right. If we were using X‑Y cardioids the SRA of 196 degrees would mean the mic array would have to be placed right above the conductor to ensure the orchestra filled the sound stage. But that would also give us a very ‘dry’ sound because of the small distance between the mics and orchestra. If we wanted a more distant perspective we would need to move the stereo array back from the orchestra, but if we did that with X‑Y cardioids the orchestra would then fill a relatively narrow part of the image width from the speakers. To fix that, we’d need to alter the array in some way to have a narrower SRA so that the orchestra once again filled the full image width, which we could do by altering the mic polar patterns, mutual angle, or capsule spacing — all with corresponding and often interacting changes to the overall sound character, perspective, image quality and so on. This is the ‘black art’ of recording!

The diagram above illustrates the relative distances that several popular stereo mic arrays would need to be from an orchestra (yellow block) to ensure the orchestra filled the stereo image to the same extent, given the different SRAs associated with each array. Naturally, the more distant mic arrays would capture more ‘room sound’ than the closer arrays, and choosing the optimum solution depends on the required acoustic perspective, image width, tonal character and any practical restrictions on mic placement!