Q. Does pan placement change if I place my speakers further apart?

I have two sets of monitors. The first pair are 40 inches apart and the second, outside of these, around 55 inches apart. The vocals are usually dead centre in both. Let’s say I have different distinct-sounding hand percussion on extreme left and extreme right, and a saxophone panned 30 percent to the left of my nose. 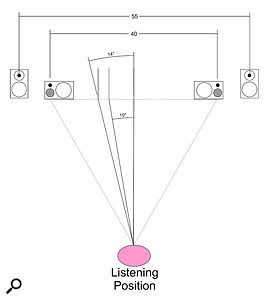 Don’t get your percentages confused with absolute measurements! When setting your speakers further apart, the placement of a panned source will inevitably change in degrees/distance, but not in terms of the relative distance from the centre to the extreme of the stereo panorama.

When I switch to the second pair of monitors the percussion remains extreme left and right — the image width is wider, as you’d expect, but the vocal is still dead centre. Should the saxophone move left by several degrees or still remain at 30 percent? I want a theoretical explanation so I can better understand what’s happening.

SOS Technical Editor Hugh Robjohns replies: The maximum image width is obviously determined by the physical separation of the speakers, so switching to the 55-inch set moves the outer edges further out, as you’ve noticed. The whole stereo image has been stretched from the centre outwards in both directions. Imagine an elastic band, with the centre pinned in the middle of your sound stage, and the outer edges fixed to the monitors. If you mark the positions of different sound sources on the band and move the monitors outwards, the elastic band stretches and so too does the spacing between your marked sound sources. So, if the saxophone is panned 30 percent left in the image, then that’s where it will always be. When you switch to the wider speakers ‘30 percent left’ is actually going to be physically further left than it was with the closer speakers.

I’ll assume your listening position is at the apex of an equilateral triangle, with the other two points being at your 40-inch spaced speakers. Rough trigonometry calculations suggest that with the closer speakers the sax will appear roughly 10 degrees left of centre. Switch to the second set and this perceived angle increases to about 14 degrees. But it is still panned 30 percent left within this wider overall image!