Q. How can I create a 'fake' M/S setup that is mono compatible? Skip to main content

Q. How can I create a 'fake' M/S setup that is mono compatible?

I thought I had the whole M/S thing down until I listened to a commercial record and realised their stereo image was wider than mine and yet still perfectly mono compatible!In order to convert a mono source to an M/S pair, I bus the source audio to two separate tracks. On one track, the audio is unchanged and routed to the stereo bus centre (which I label 'Mid'). The other I delay by around 10ms, then split it to the left and right stereo bus, with the right side inverted (I label this track 'Side'). The 'Side' track cancels when I sum to mono.The problem I'm having is that the stereo image is not very wide. While it is clearly in stereo, it does not reach the extremes of the stereo field as it would by utilising the Haas effect. When I use a simple Haas trick, I achieve the width I desire (ie. a hole in the middle), but it is not acceptably mono compatible. Is there a trick I am missing to achieve the width that I desire in my pseudo-M/S setup, yet also maintain mono compatibility?

SOS Technical Editor Hugh Robjohns replies: When you use this method of creating a fake stereo signal from a mono source, the apparent width is determined entirely by the amount of Side signal relative to the amount of Mid signal. No Side means mono. Loads of Side means wide perceived stereo image. Too much Side signal means a hole in the middle and quiet mono!

So you should be able to make the track as wide as you want — even to the level of a hole in the middle — just by further pushing the level of the Side signal. Changing delay time also affects perceived width and size. Larger delays (30-70 ms) create more hall-like effects, while shorter delays (5-30 ms) are more subtle and less 'roomy'.

However, this kind of M/S-based fake stereo is never as convincing as real stereo. You inherently end up with a mush of frequencies spread across the sound stage; your original mono source is spread across the image like butter on bread. There is no discrete spatial positioning, and no coherent imaging. Basically, it isn't real stereo, it never can be real stereo, and comparison with a real stereo recording is pretty pointless and always disappointing!

Moreover, created in the way you describe, the stereo image will tend to be bass-heavy on the left-hand side, because the relatively short delay you are using will tend to allow low frequencies to sum in phase on the left and out of phase on the right. This can be cured by inserting a high-pass filter before (or after) the delay line to remove bass from the Side signal. Set it to about 100-150 Hz to ensure the bass content stays central. 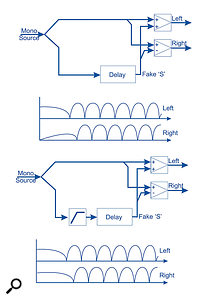 Top: The arrangement our reader is currently using to produce a wider stereo image, which results in reduced bass on the right-hand side. The fake stereo image arises because some frequencies are stronger in one side than the other, due to the offset comb-filtering resulting from combining the original and delayed signals with the same and opposite polarities. More 'fake Side' ('S') level results in a wider perceived image. In the lower diagram, the fake 'S' signal has been high-pass filtered, avoiding bass cancellation in the right-hand side.

The Haas effect — which you can employ by panning the original source to one side and a short-delayed version of it to the other — can sound very wide indeed, but usually isn't very mono compatible. The only way to make a single source fill a stereo sound-stage in any kind of convincing way — in my humble opinion — is to record it in stereo in a decent-sounding acoustic space, or use a really good reverb processor to achieve a similar thing. There are other techniques that can be used to create pseudo-stereo effects using dedicated stereo-width enhancers and variations on the distortion and chorusing theme, but they all tend to change the tonality to some extent, which may not be what you're after.