Q. How can I improve acoustics in a long, thin room? Skip to main content

Q. How can I improve acoustics in a long, thin room?

The diagram to the right shows my room, which serves as my studio. The dimensions seem to be bad for low frequencies and there are sound-pressure failures at 55Hz and between 110 and 140 Hz. I have an Auralex foam bass trap, but I don't known if absorption is the answer. What should I do to improve this situation? 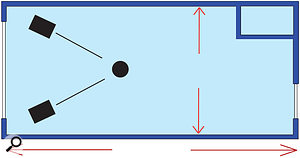 If you have any choice of rooms for your studio, try to avoid those whose dimensions are multiples of each other.

SOS columnist Martin Walker replies: I agree: that's a bad choice for a room, dimensionally, as far as acoustics are concerned. The 2.6‑metre width and 2.5‑metre height are nearly identical, while the 5.8‑metre length is close to double these, giving you a shape that's almost two cubes joined together. The room is also relatively small, which will mean it'll have relatively few modes below a few hundred hertz and, as the dimensions are closely related to each other, these modes will pile up at some frequencies (resulting in a huge peak), with large gaps between them (creating big dips in the frequency response).

Room-mode frequencies are fairly easy to calculate, but it's even easier to plug your three dimensions into a utility, such as the on‑line MCSquared Room Mode Calculator (www.mcsquared.com/metricmodes.htm) or the Hunecke Room Eigenmodes Calculator (www.hunecke.de/en/calculators/room‑eigenmodes.html). However, if you've got a PC, the ModeCalc utility from Realtraps (www.realtraps.com/modecalc.htm) is one of the easiest to use, displaying the first 16 axial modes for each room dimension up to 500Hz in an easy-to-interpret graphics plot. It would show that the biggest gaps in your room mode plot occur between 30 and 60 Hz (which explains your hole at 55Hz), between 70 and 90 Hz, and again between 90 and 130 Hz (the other area you've already pinpointed).

Acoustic-foam bass traps, like the one you already have, can certainly be effective, and acoustic foam is also excellent for dealing with mid-/high-frequency early reflections from your side walls and ceiling. However, acoustic foam is invariably a lot less dense than the 60kg/m3 Rockwool that is generally recommended for DIY bass traps, and you will, therefore, require a much greater volume of it to achieve a similar amount of absorption at lower frequencies. In a small room, you'll simply run out of space before you can cram in enough acoustic foam traps to adequately deal with the problems.

Diffusion can be a good way to 'break up' your reflections so they become less troublesome, but you ideally need to be at least a couple of metres away from them to avoid hearing a set of discrete reflections, rather than a more diffuse soundfield, so they are not often used in small rooms like yours. Tuned traps also have their place in the grand scheme of things but, in my experience, tend to be more difficult to tune and place optimally compared with broadband trapping that you simply fit where the bass levels are loudest, so they absorb the sound more efficiently.

Overall, I think broadband absorption is your best bet; as much of it as you can reasonably fit into your room. Start by placing traps that straddle the front vertical corners of the room, then the rear vertical corners, followed by any other corners you can manage, such as the ceiling/wall corners, and even the floor/wall corners where feasible. Also, don't forget some side panels and ceiling 'cloud' at the 'mirror points' to deal with early reflections.