Q. How can I improve my vocal recordings? Skip to main content

Q. How can I improve my vocal recordings?

I'm quite new to vocal recording, and am using either a Neumann TLM103 or AKG C414, depending on the material being recorded. I have the mic set up with an SE Reflexion Filter in an enclosed corner of my room, with duvets hung around it, and I'm going direct into my Digidesign Digi 003R audio interface. I get vocalists to sing six to 12 inches away from the mic, and use a pop screen. My problem is that the vocal tracks are sounding rubbish! The current singer is a nightmare to work with: he sings really quietly one minute, right on the mic, then shouts right into it, so I have to keep the input gain right down, resulting in a bad recording level. If I use a compressor to track through, it sounds over‑compressed and nasal even if I set the threshold really high. Do you have any tips? I'm a guitarist, not a recording engineer, which is probably the problem. 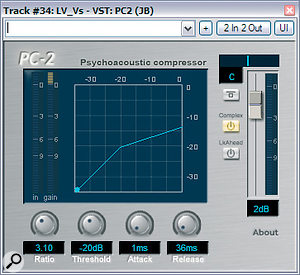 Some singers need quite a bit of help to tame an over‑dynamic technique. If you have to apply a lot of gain reduction, but fairly transparently, certain compressor plug‑ins can be invaluable. 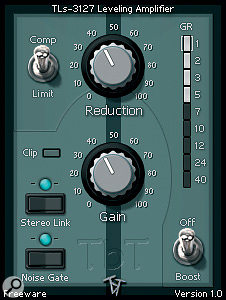 SOS contributor Mike Senior replies: The first thing to say is that you needn't really worry about setting the recording level too low. The quality of the equipment you're using (and much other decent project‑studio equipment) isn't going to add appreciable noise to anything you're close‑miking, and as long as you record at 24‑bit resolution you can afford to leave enough headroom to cope with the singer's peaks. Just set the level to avoid clipping, which is much more of a problem on vocal parts. By the same token, there's now little to be gained by recording through a compressor, as this could restrict your processing options at mixdown, and there's not the need for it now that most of us don't record at 16‑bit.

If your singer gets really loud, there's some danger of him overloading the analogue circuitry on the way to the A‑D converters. The TLM103 should be able to handle 135dB before distorting, but in the unlikely event that your singer manages to max that out, you can switch to the AKG and use its pad switch to accommodate levels up to 158dB. He'd have to have eaten heavy artillery to generate that kind of volume! Even if you prefer the sound of the TLM103, you can record the padded C414 alongside to hedge your bets, if you're worried, switching to the C414 for any phrases or syllables that get scorched on the TLM103. As long as you don't overload your mics, and are recording straight into the Digi 003R, I can't see you overloading those inputs, as they're designed to cater for line‑level sources too.

However, it's worth saying that most singers don't sound as good when singing at their very loudest. A lot of singers who sound like they're absolutely caning their vocal cords aren't, in fact, that loud in the room — they're just adept at squeezing a 'loud' character out of their voices at more sensible levels. (This also means that they can do more takes before their voices are exhausted.) Most voices I've encountered tend to thin out as they increase in volume, with a couple of mid‑range resonances dwarfing all the more characterful frequencies, so that the vocal sound just disappears into the mix. On the other hand, quieter singing tends to let more of the uniqueness of the voice come through, and tends to sound bigger and closer when faded up in the mix. This is something that Terry Britten and John Hudson made use of for Tina Turner's comeback single, 'What's Love Got To Do With It' (check out our interview with them back in SOS May 2004), for example.

The headphone balance you set up is a valuable tool for manipulating the singer's projection, so be sure to give it enough thought. If you don't put enough vocal into the cans, or you feed a compressed vocal into the monitor mix while recording, it's easy for the singer to feel that they have to strain to be heard. On the other hand, if you turn their vocal way up in the headphones and ditch the monitoring compression, they'll be less inclined to belt things out and are likely to effectively start 'self-compressing' to some degree. However, it's worth sounding a note of caution: if the singer tries to even out their levels by adjusting the distance between themselves and the mic (a common live‑performance technique), this can cause more problems than it solves, because the change in position can dramatically alter the vocal tone, not least because of the proximity effect on most vocal mics. Such changes can be really fiddly to correct for at the mix.

You can do a lot to help the vocal timbre with mic technique, as well. Mic positions above the level of the mouth might be worth investigating, as they're normally smoother (and you get less sibilance too). Also consider putting some acoustic foam on the ceiling if it's of average height, as that might be contributing a nasty coloration if it's sending a strong reflection into the mic. Neither the Reflexion Filter nor your duvets are stopping sound reaching the top of the mic.

If you can get a good, clean take into your system, you can tackle dynamic range issues with a cool head and in your own time. The voice is one of the most dynamic sources you'll encounter in record production, so it's normal for this task to take some careful work. If you're having trouble finding compressors that can cope, and you can run VST plug‑ins, there are a few freeware ones you might want to try: Jeroen Breebaart's PC2 (with its Complex button switched in), Antress Modern's Painkiller, and the Tin Brooke Tales TLS3127 Leveling Amplifier. All of these are good at delivering a great deal of gain‑reduction fairly transparently. If you can't load VST plug‑ins, my advice is to compress your vocal in stages, using more than one compressor. One good general‑purpose combination is a slower acting (and perhaps soft‑knee) compressor, followed by a faster peak limiter to catch rogue peaks. Mastering limiters can work surprisingly well in this application, as their whole purpose is to squeeze levels with the minimum of side‑effects.