I've recently started working at a classical radio station in my area, and I was fully expecting to have to deal with mono issues and think about miking live performance with those in mind. But everything is done in stereo and broadcast in stereo. Spaced omnis are common, which is not very mono compatible. So when is mono compatibility a necessity, and is mono really ever used any more as a final 'product'? 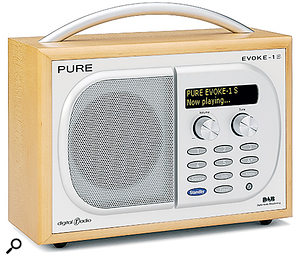 Even popular modern DAB radios such as this one from Pure are mono by default, and a large part of the potential audience for radio and TV in the UK still listens in mono — so mono compatibility is still a consideration for music producers.

SOS Technical Editor Hugh Robjohns replies: In a technical sense, mono compatibility is still important. Whether a particular radio station chooses to bother about it is a decision for them, but I would suggest it unwise to ignore it completely.

FM radio is transmitted essentially in a Mid/Side format, where the derived mono sum (Mid) signal is transmitted on the main carrier and the 'Side' information is transmitted on a weaker secondary carrier. A mono radio ignores the Side signal completely, whereas a stereo radio applies M/S matrix processing to extract normal left and right signals.

However, there is potentially a noise penalty in this process, so in poor reception areas, and often when on the move in a car, FM receivers are designed to revert to mono, to avoid reproducing a very hissy stereo signal. As a result, a large amount of in‑car listening will be in mono (at least, here in the UK) because of signal fading and multi‑path issues. In addition, a very large proportion of radio listeners do their listening in the kitchen, bathroom or garden, using portable radios that are usually mono. So mono compatibility is still important to a very large proportion of the potential FM radio audience.

Considering TV for a moment, the primary sound on analogue (terrestrial) TV in the UK is in mono, transmitted by an FM carrier associated with the vision carrier. Although a secondary stereo sound carrier was added in 1991, using a digital system called NICAM, there are still a lot of small mono TVs on the market. Analogue TV will be switched off in the UK within the next three years, and digital TV (both terrestrial and satellite) is broadcast entirely in stereo (or surround in some cases) — but even so, it is still possible to buy mono receivers.

So given that a significant proportion of the potential audience (for analogue and digital radio and TV) could well be listening in mono, I'd suggest that checking and ensuring mono compatibility is still important. I know that some classical radio stations, in particular, argue that only serious music enthusiasts listen to their output, and they would only do so on decent stereo hi‑fi equipment. Perhaps that is the case, but to my way of thinking, ensuring reasonable mono compatibility is still the safest approach, and needn't restrict the way broadcast material is produced in any way at all.

Using spaced omnis is a technique often favoured by classical engineers, largely because of the more natural sound and smoother bass extension provided by pressure‑operated mics. In some situations, particularly when using a single spaced pair, there can be mono compatibility issues — but only rarely, and it is usually easily fixed. For example, if any additional accent or spot mics are used and panned into the appropriate spatial positions, any phasing or comb filtering from the spaced omnis, when auditioned in mono, will be diluted and usually ceases to be an issue. Even in cases where a single spaced pair is used, listening to the derived mono may sound different, but it is rarely unacceptable.

To sum up, I would definitely recommend checking mono compatibility and trying to ensure that it is acceptable (even if not entirely perfect). If the sound quality of spaced omnis is preferred, there's no reason not to use them — even if the final output is mono — provided suitable skill and care is used in their placement and balance. The BBC certainly use spaced pairs for Radio 3 transmissions in appropriate situations.