Q. How can I match my mixer’s insert send levels to a high-end compressor? 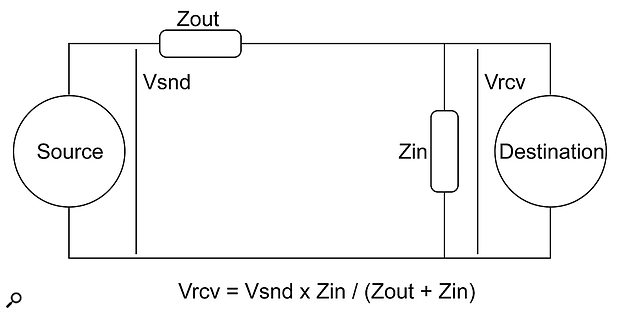 An output connected to an input forms a ‘potential divider’. If Zin is 10 (or more) times higher than Zout, all should be OK!

I have a slight level mismatch that I don’t know how best to resolve. I want to patch the Dangerous Music Compressor through the inserts on two of an Allen & Heath GL2400 mixer’s input channels. The problem is that the send signal from the mixer is a tad weak for hitting the compressor where it works best. The GL2400 manual says it sends at 0dBu, but does not mention impedance, whereas the Dangerous compressor manual says its input impedance is 20kΩ but does not mention signal levels. I’m looking for a solution that gives the compressor a slightly stronger signal while being adjustable/trimmable and transparent, but isn’t ‘overkill’. Can you help? Many thanks in advance.

SOS Technical Editor Hugh Robjohns replies: This is quite a common issue, as many semi-pro desks of this type feature unbalanced inserts working at what’s known as ‘a depressed operating level’ — something that’s generally intended to optimise headroom within the console at that point in its signal path. The specific level varies with the design of the console but is typically somewhere between -6 and 0 dBu, rather than the nominal line level of +4dBu. Fortunately, a slightly reduced insert send level rarely presents a problem with most outboard equipment. However, it can become an issue with devices which only start to sound ‘interesting’ when pushed quite hard. The Dangerous Music Compressor might be considered one of those, especially since it is designed to handle signals up to a whopping +27dBu. There are several possible solutions to the problem (although not all will be deemed practical), but first let me comment upon this business of interface impedances, because it comes up a lot and is almost always irrelevant.

Most analogue audio signal interfaces are designed to work in a ‘voltage transfer’ mode, the idea being to pass the source’s signal voltage to the destination without loss. The basic circuit arrangement is as shown in the diagram (this is an unbalanced connection for simplicity, but the principle applies to balanced connections too). The source generates a signal voltage Vsnd, which is passed to the destination via the output impedance Zout. This voltage is developed across the destination’s input impedance Zin, and received by the destination as Vrcv. School science lessons will hopefully have described this arrangement as a ‘potential divider’, and by using Ohm’s Law (V=IR) it is possible to work out how the source and destination impedances affect the received signal voltage.

Applying a bit of algebra, the appropriate formula is Vrcv = Vsnd x (Zin / Zin+Zout), and as we want Vrcv to be as close to Vsnd as possible it should be clear that the result of Zin/(Zin+Zout) must be as close to 1 as possible — this is achieved by making Zin large, and Zout small, and moving from the theory to the practical implementation, Zin needs to be at least 10 times larger than Zout to work acceptably well (introducing less than 0.8dB of signal loss).

The point is that the ubiquity of this voltage-transfer configuration means source and destination impedances can usually be taken for granted; output impedances will normally be under 150Ω or so, and mic input impedances will be 1.5kΩ or higher, and line inputs usually more than 10kΩ. That being the case, the dispatched signal level will arrive at the destination without significant loss and we can ignore impedance values completely — it’s only the signal level that matters when it comes to connecting equipment together.

With that matter cleared up, let’s return to the practical problem of your insert send levels. The simplest and most obvious option is to run the source channel 10 or 12 dB hotter than you are currently doing. That will obviously provide a significantly stronger insert send signal, but the downside will be significantly reduced headroom margins in the input stages of the desk (and in the subsequent insert return stages if you don’t attenuate the return signal appropriately). However, in many cases, working this way is quite practical and acceptable; it really just depends on the nature and dynamics of what you’re recording.

An alternative option, which is potentially expensive and requires some DIY effort, would be to introduce a step-up transformer at the insert send. This option has the benefit of not only balancing the unbalanced insert send signal, but also giving a passive signal voltage uplift. However, you’d need a couple of high-quality transformers designed for proper line-level duties, with something like a 1:4 ratio. Sadly, such devices are relatively rare and expensive (think in terms of around £100/€110/$130 each), and you’d have to put them in a box and wire them up.

For many, the more practical solution is to use a line-level preamp of some sort between the insert send and outboard unit to boost the level by 10-12 dB. Aside from the cost of more active electronics, the potential downside is a more complex signal path, more connections, and the possibility of increased noise/distortion — although you could turn that around as an option to introduce some beneficial musical character, depending on your viewpoint!

Lastly (but almost certainly not attractive or practical in your situation), you could modify the input stages of your compressor to make it more sensitive and deliver the effect you want from a lower input level... I’ll not take that idea any further for obvious reasons!

So, my advice would be to try running the desk channels a bit hotter as a first experiment — this is easy to do, involves no cost at all, and may well achieve what you want with no further effort. If you find you run into input channel headroom problems in this way, then introducing a line amplifier is the next-best option. Rather than investing in some esoteric preamp though, I’d suggest purchasing an interface box designed to connect domestic equipment into a professional system — often called a ‘pro-interface’. These are available from a wide variety of suppliers including Radial, Tascam, Sonifex, Canford, RDL, ART and many others. These are always dual-channel (stereo) and are designed to raise an unbalanced signal at a nominal -10dBV to a balanced one at +4dBu. Most also do the reverse conversion, lowering balanced +4dBu to unbalanced at -10dBV.

You’ll note that the specifications are using different decibel references (dBu is referenced to a signal voltage of 0.775V RMS, while dBV is referenced to 1V RMS). Having already thrown Ohms Law at you, I won’t introduce more maths here; suffice it to say that a +4dBu signal is roughly 12dB higher than -10dBV. This works out well, since a 12dB level rise is about right for your outboard-driving needs, and it also converts the unbalanced insert send/return to a balanced interface for the outboard, potentially avoiding ground-loop issues.

There’s still one thing to be wary of — the need to ensure sufficient headroom in the unbalanced side of the interface. This is because these boxes are expecting an unbalanced input signal at a nominal -10dBV (which is about -8dBu) from a signal source which is likely to have had its dynamics controlled. In contrast, the nominal insert send level is going to be around 0dBu and with uncontrolled transients way above that (which is why you want to route the signal through a compressor in the first place!). So a lack of headroom could be an issue, particularly in some cheaper designs. The good news is that I’ve never found this to be an issue in practice as, generally, the unbalanced -10dBV circuitry has the same headroom margins as the +4dBu side of things, and is typically around the +20dBu mark or better.