Q. How can I permanently stop mains noise in my studio? 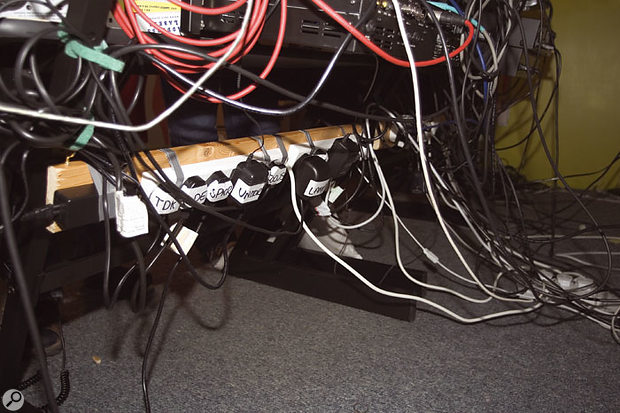 Systematically tracking down the source of mains hum may be tedious but necessary, and you'll only have to do it once.

Can you recommend products suitable for the European power grid that can be used to clean up the power signal and ground loops? I am experiencing both ground loops and a generally dodgy power signal. A lot of people recommend that I use some sort of UPS (Uninterruptible Power Supply), but I don't need the functionality they provide, and I would rather spend money on better power conditioning and filtering equipment. Your advice will be greatly appreciated!

PC music specialist Martin Walker replies: In my opinion it's only worth 'cleaning up the power signal' if it's dirty, and a huge number of background noise problems are caused not by mucky mains, but by audio wiring that results in ground loops. This is the source of lots of unwanted nasties that sneak into your audio signals, and removing them often requires no dedicated products at all. Problems range from straightforward 'hums' (which normally include various levels of the mains harmonics, such as 50Hz, 100Hz, 150Hz, and so on in the UK, or 60Hz and higher multiples in the US), to a wide range of scratches, ticking, buzzing and other digital gremlins that are often associated with computer activities such as graphic redraws, mouse movements, and hard-drive activity.

If you're experiencing any of these ground-loop problems, you won't solve them by installing a power conditioner or an Uninterruptible Power Supply, so before you even think of spending money on either of these options you should examine your basic wiring. Temporarily unplug all the audio cables from your setup, and if you've got gear bolted into a rack, it may also be worth disconnecting the mains cables of this other gear to rule out problems with several metal cases touching each other and causing yet more ground loops.

As tempting as it might seem, short cuts such as leaving the cables plugged in and just switching off the connected gear at the mains won't work, since the mains cables and any resulting ground loops will still be in place. Unplugging one cable can therefore make the background noises better or worse, depending on how this affects the remaining ground loops. Only by removing every audio cable and working through your studio item by item can you totally eradicate ground-loop problems.

You should now hopefully hear silence from your loudspeakers or headphones, apart from a little hiss and possibly a tiny amount of hum or buzz if you turn the amplifier right up and place your ears nearby (be very careful when doing this, since an unexpected signal at this point could damage your ears or blow up your speakers). If there's still more hum than you expect, it might be due to a nearby 'line-lump' power supply, in which case, you should move this as far as possible from audio cables, and at the very least try rotating it to find the 'quietest' position. If you're still unhappy with the levels of hum and noise from your amp/speakers you may need to get them checked out by a technician — remember that hum levels of both solid-state and valve amps can increase over time, due to deteriorating capacitors or valves. 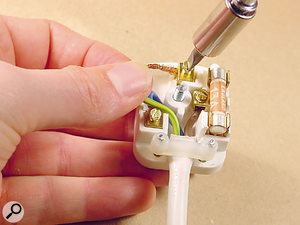 By disconnecting the earth wire inside a mains plug, you are removing an essential electrical safety measure — never do it!Assuming all is well at this stage, turn down the speaker levels, connect your mixer to the amp, turn up and listen again (if you route all your gear directly to a multi-channel audio interface, this is your 'mixer'). You'll probably hear greater hiss levels from the combined contribution of all the input channels until you pull the master fader right down, but there still shouldn't be any obvious hum or other interference. If there is, it's generally because you've just created an earth loop — the amp/speakers are already earthed via their mains cable, and the mixer is earthed in exactly the same way, so when you connect the two with an audio cable its screen connection completes the loop, causing unwanted earth currents to flow.

If your amp has balanced inputs and your mixer/interface has balanced outputs, the cure is to connect the two via balanced audio cables (twin core plus screen). If not, you may be able to achieve the same results by disconnecting the screen of an unbalanced cable at one end (in the case of soldered cables you can do this inside the plug, normally at the destination end). Similarly, if the amp has a balanced input, but your mixer/interface only provides an unbalanced output, you can make up a pseudo-balanced cable, as I described in 'Computer Audio Problems' in SOS November 2004. Here, one end of the balanced cable is wired to a balanced jack or XLR as normal, while the other end is wired to an unbalanced jack with the screen disconnected or, preferably, connected via a resistor. These cost only a few pence more to make than unbalanced cables, yet provide an ideal solution for connecting any unbalanced source to a balanced destination. I've got such cables wired between all my hardware synths and mixer, and background noise levels are considerably reduced as a result.

Occasionally the only way to cure a ground-loop problem is to install a line-level DI (Direct Injection) box between the mixer and amp, to 'galvanically separate' the two circuits, commonly by using a transformer to transfer the signal — the audio gets through perfectly, but there's no direct connection at all between the input and output cables inside the DI box. This is sometimes the only way to cure some laptop-related ground-loop problems, but in my experience, most others can be dealt with by cable modifications.

Once your mixer, amp, and speaker chain have an acceptably low level of background noise, plug each remaining item of gear into your mixer in turn and power it up, listening at each stage for unwanted noises. As soon as you hear any, you know you've either got a faulty piece of gear or a ground-loop problem, and can sort it out in exactly the same way as before. If it's rack gear, you may need to temporarily unbolt it from the rack to check that the problem isn't due to its case touching other earthed metalwork and creating a further ground loop (if it is, use nylon rack bolts or 'Humfrees' to isolate it). Alternatively, low-level circuitry such as mic preamps can pick up mains interference from the mains transformer inside a nearby rack unit. This systematic approach is the only way to deal with ground-loop problems. It may be tedious, but you only have to do it once, and the benefits can be enormous! 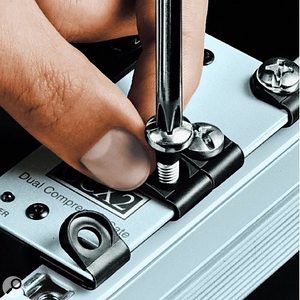 Humfrees.When you've got all your gear connected, and still have no hums or other nasties, then and only then is the time to consider adding a 'power conditioner' or UPS. A power conditioner will filter the mains signal to remove any radio-frequency interference plus any incoming spikes and other intermittent noises riding piggyback on the mains signal from the outside world. However, most modern electronic gear, including computers, already includes such filtering in its own power supplies, and in general, it's far better to suppress switch-related mains transients from distant devices such as refrigerators and central heating systems at source, as this will be far more effective.

If, after solving your ground-loop problems, you don't hear any other nasties then you probably don't need a power conditioner at all, but they can be very useful bolted into a rack for live use, to cope with unexpected 'incoming' problems due to stage lighting or grotty wiring in unfamiliar venues. However, if your mains power is 'generally dodgy' it may pay you to have an electrician check your house wiring, and contact the local electricity board to have your incoming mains checked for quality. If, for instance, you live in a remote rural location or close to an industrial estate, you may suffer from occasional but unavoidable interference problems that will benefit from a studio-based power conditioner, although I've never personally found the need for one (perhaps I've been lucky).

A UPS will, in addition, cope with 'brownouts' (occasional severe drop in mains voltage, generally for a few seconds only), plus the more severe 'blackouts' (complete loss of mains power), in exactly the same way as a laptop computer carries on running on battery power if you pull its mains plug. Even if you only use the UPS to power your desktop computer rather than the whole studio (generally a far cheaper approach), it can prove invaluable if you have paying clients in your studio, to avoid your computer rebooting in the middle of a session, and can give you a vital few extra minutes to save the current project before the UPS backup power runs out.