Q. How can I salvage my ‘spiky’ guitar track? Skip to main content

Q. How can I salvage my ‘spiky’ guitar track?

I recently recorded a steel‑strung, finger‑picked acoustic guitar track. The problem is that it sounds very 'spiky' and I'm having to use a lot of compression. The track is for an acoustic song with a single guitar and a single vocal. Do you have any tips on how I can bring it 'under control' without making it sound too compressed? 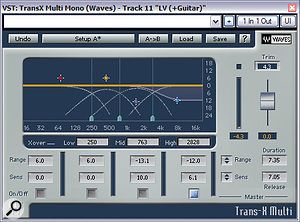 Specialised processors might be needed to deal with an over‑spiky acoustic guitar recording. Suitable examples include multiband transient processors such as Waves' Trans-X Multi and dynamic equalisers such as the Platinum Ears IQ4. 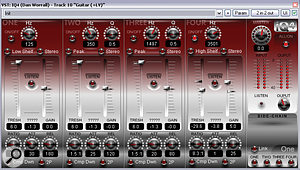 SOS contributor Mike Senior replies: If it's sounding too spiky, that'll probably be because you put the mic too close to the instrument, in general, and too close to the sound hole, in particular. This tends to capture the instrument's picking transients more prominently than its overall tone, so, on the recording side, I'd try to back the mic off a bit. The mechanical noises, in particular, won't travel as well as the more resonant components of the sound and you should get something a bit smoother. A more distanced positioning will probably give you a sound that is more appropriate for the genre, too, as it'll catch the instrument in a more natural perspective.

Regarding dealing with this problem after the fact, you're right to say that straightforward compression probably isn't what you're looking for here. If the spikiness you're hearing is mostly down to pick noise, this is likely to be concentrated mostly in the high‑frequency region of the audio spectrum, in which case some kind of frequency‑selective dynamics processing will make a better job of things, because it'll be able to target only the troublesome frequency region, thereby reducing the processing artifacts. The top band of a fully‑featured multi‑band compressor would do the trick here, if you set the high crossover to maybe 2‑3kHz. My first instinct would be to go for a fairly high ratio (perhaps 8:1) with fast attack and release times (around the 1ms and 10ms marks respectively) and then try to set the band's threshold so that it just reins in the spiky peaks. A dynamic EQ (such as the freeware Platinum Ears IQ4 VST plug‑in) could be set up to very similar effect, too and, in some cases, a vocal de‑esser may be able to achieve similar results. Some dedicated de‑essers are based around a similar kind of high‑frequency dynamic EQ.

If the spikiness is more than just pick noise, you could also try using a dedicated threshold‑independent transient processor (such as SPL's Transient Designer). Some such designs may be better at dealing with the problem than others, as each has its own attack and release characteristics. So, if you have more than one such processor available to you, do try them all to find which one works best. Waves even do a multi‑band model, Trans-X Multi, which is a phenomenally powerful salvage tool if set up with care.

If none of those suggestions work well enough, a final suggestion would be to try some kind of mastering limiter. Mastering limiters specialise in the transparent reduction of level peaks, and often operate on them in much more complex ways than traditional dynamics processors do. Again, though, if you have more than one limiter available to you, try them all, as they all seem to have their own individual character, in my experience.