Q. How can I transfer old tape recordings to computer? Skip to main content

Q. How can I transfer old tape recordings to computer? 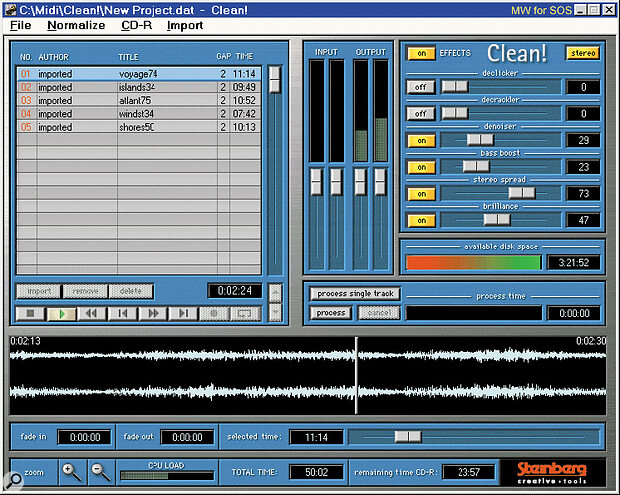 I am beginning a project which involves transferring a collection of home reel‑to‑reel recordings from the '50s and '60s to CD.

Many of the reels are deteriorating, and to preserve the recordings I have already copied the tapes using an old reel‑to‑reel player and a stand‑alone Philips CD rewriter, but I am convinced that I can achieve better results by linking a reel‑to‑reel to my computer.

How should I go about this? What would be the best reel‑to‑reel machine to use (bearing in mind limited budget), what soundcard would be best and what, if any, software is available to clean up the original sound (many of the tapes have lots of hiss).

For your additional information, the recordings were made using an old Grundig TK35 reel‑to‑reel machine. Reels are standard 5‑inch/7‑inch playing at 3.75ips and 7.5ips. Vocals and acoustic guitar were the only instruments and they were recorded simultaneously using an open microphone, hence varying sound levels and background noise. Although the quality of my recordings to the Philips machine is relatively good, I need to achieve the highest possible quality, as I plan to release the recordings on CD.

Editor Paul White replies: First off, if the tape is deteriorating, it may play better if you bake it for a couple of days first, at 50 degrees C. This is often done where the tape binder is breaking down, causing the oxide layer to stick to the tape guides and heads, as happened with some batches of Ampex tape made in the '70s. I've done this successfully myself using an ordinary egg incubator, which you may be able to rent from a farm supplies shop or even scrounge the use of from a local farmer. The tape remains playable for a few days after treatment, then gradually reabsorbs moisture and reverts to its previous state.

In the first instance, transferring the recordings to CD‑R is a good idea, as you can always go back to those CD‑R copies and then process the information in a computer to clean it up. Unless you buy a very good soundcard, the A‑D converters in the CD‑R recorder are likely to be better than those in the soundcard, and once on CD‑R, you can load the songs directly into a computer via the computer's CD drive, so you won't have to come out of the digital domain.

What software you use to clean up the recordings depends on whether you use a Mac or a PC. Steinberg's Clean software works well on the PC within its price range, though TC's Spark XL on the Mac has a sophisticated and effective de‑noiser, which you'll need to clear up the hiss without introducing side effects. Alternatively, you can pay Cedar Audio to process the material for you, using their own high end de‑noising systems, which will produce the best results at a quite realistic cost. (Telephone them on +44 (0)1223 881771, or see their web site at www.cedar‑audio.com.)