Q. How common is re-amping?

I'm curious to know how common the use of re-amping is amongst producers, engineers and composers. There are so many applications for this that I find it strange that re-amp circuits are not built into mixers, DI boxes, soundcards and audio interfaces.

There are also relatively few re‑amp boxes available, and they're all absurdly overpriced! What is so complex about a re-amp box to warrant a price tag of over £200?

SOS Technical Editor Hugh Robjohns replies: Re-amping is the process whereby the direct signal from a guitar, bass or keyboard is recorded — usually on a separate track alongside the signal captured simultaneously with a microphone from an amp — and later routed to an amp in a studio to be miked up and overdubbed.

This approach allows the choice of amp or amp settings, or mic and mic position, to be changed after the initial recorded performance, but without the compromises and limitations inherent in trying to process an already recorded amp sound. It is a popular and widely used technique, although it is more common in the production of some musical genres than others. Re-amping can be both a time saver and a time waster, depending on how and why it is employed! As a way of modifying a guitar part to better suit the track as the mix progresses, it is an invaluable technique, saving the time and effort of having to record a new performance. However, if used to avoid committing to a sound during tracking, it can be an enormous time waster.

Often, traditional re-amping is replaced by virtual re-amping using guitar-amp plug‑ins, many of which offer remarkably good quality and enormous versatility. The process is exactly the same, but without having to physically route the signal out of the DAW and into a real amp in a real studio, miked up with real mics. 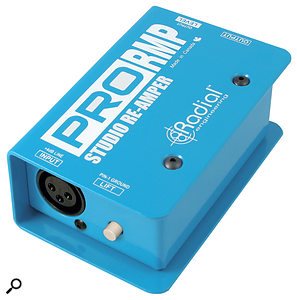 The Radial ProRMP allows fairly hassle‑free reamping, giving you the ability to change amp settings and effects, for example, after the initial recording has taken place.

There are various products available with integrated facilities for re-amping, as well as dedicated re-amping units, although the latter approach seems the more popular. There is nothing complicated about a re-amp box, which, in most cases, is essentially a passive DI box used in reverse.

A re-amping box accepts a balanced line‑level signal (nominally +4dBu) and converts it to an unbalanced instrument‑level signal (nominally ‑18dBu), usually via a transformer. A variable level control is often provided to optimise the level fed to the amp, along with a ground‑lift facility to separate the balanced source and unbalanced output grounds, thus avoiding ground‑loop hum problems.

A passive DI box can often be used reasonably well in this role, although it is normally necessary to attenuate the line‑level input significantly, to avoid saturating the transformer and generating an excessive unbalanced output level. Alternatively, the kind of line-level balanced/unbalanced interface intended for connecting domestic equipment to professional systems can be used, and the original ART CleanBox is often recommended in this role. However, for only a slightly greater outlay, a dedicated re-amp box, such as the Radial ProRMP, is rather more convenient to use.