Q. How do I compress my orchestral recordings?

I regularly make stereo location recordings of orchestras, using Cool Edit Pro for editing and mastering. If I simply normalise my raw recording, when it is played back in a typical domestic environment with average background noise, it's necessary to turn up the volume for the quiet bits and then turn it down for the loudest sections.

So, for each movement of a piece I will look at the level of all the sections and boost the quieter passages by a fixed small amount, and reduce the level of any extreme peaks in the loudest parts. Then, by checking what headroom there is at the loudest part, I can amplify across the whole performance to achieve maximum volume whilst maintaining dynamic integrity between movements. I don't believe a stand-alone stereo compressor can achieve this effect. 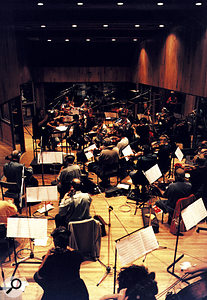 Orchestral recording at Angel Studios, London — some compression techniques are unique to classical recording.Are there any rules of thumb that can be used in the adjustments in level that can be applied to passages with extreme dynamics? How do the producers for Deutsche Grammophon, Sony, and so on do it? I am not aware of having to adjust the volume in regular listening conditions when playing back commercial classical recordings.

Technical Editor Hugh Robjohns replies: In days of old you would ride the faders as the piece was being recorded, following the score to anticipate when you need to start pulling the fader down (to control the level of a loud section) or push it up (to lift a quiet section). These days, with 24-bit recording, this kind of adjustment tends to be made at the editing/mastering stage rather than during recording. It sounds like you're doing the same thing in Cool Edit Pro.

As far as compression is concerned, I would suggest some very gentle overall compression, typically with a ratio of 1.1:1 and a threshold around -30dBfs, but you'll need to adjust this to suit the amount of squash you require. This will reduce the overall dynamic range but maintain some dynamic variation. Be careful choosing your attack and release times to prevent any pumping effects. A multi-band compressor will make this easier.

Another popular technique exclusive to classical music is the parallel compressor. For this you need a compressor with a huge headroom margin and the ability to apply a lot of gain reduction (well over 20dB). The idea is to split the signal in two, with one path going to the mixing desk, and the other going to the compressor. The output of the compressor is then routed to the desk and mixed with the direct signal. Set the compressor to provide around 20dB of gain reduction when the music is at its loudest, and set the return level so that this compressed signal is about 20dB below the direct signal's peak level. Set attack and release times to prevent pumping. The idea is that loud passages won't be altered significantly because the compressed signal is so quiet in comparison. However, as the input signal falls in level, the compressor applies less gain reduction and so its contribution becomes more significant, raising the low level signal. With input signals of -20dB, the compressor won't be compressing at all, and so will combine at the same level as the direct signal, providing a 6dB overall lift. Obviously, you can play around with the compression ratio and threshold to vary the amount of lift you require. It is a very subtle and effective technique, but is a bit fiddly to set up.

Finally, if you're using a digital compressor, don't forget to offset the direct signal to correspond to the delay caused by the compressor's A-D/D-A conversion process, otherwise you will encounter phase problems.