Q. How do I connect mic preamps to patchbays for line-level processing? 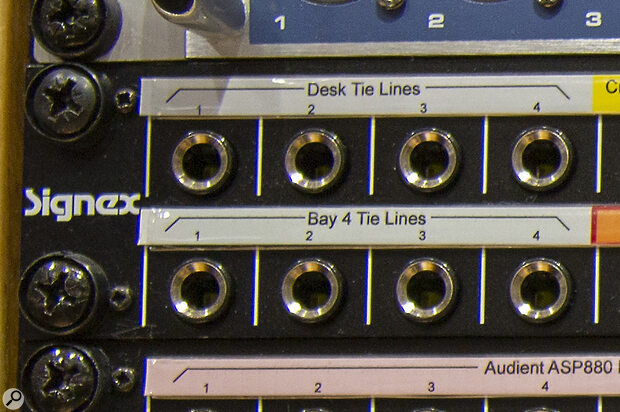 When working with more than one patchbay, for example one for mic inputs and another for line sources, it can be a good idea to set up ‘tie‑lines’ between them.

I enjoyed Hugh Robjohns’ excellent article ‘Patchbays In The Modern Studio’ [SOS December 2020] but one point he made left me confused: he said that you shouldn’t put mic preamp inputs on the main patchbay but, instead, give them their own XLR inputs. I get that this removes the risk of phantom power being routed to the wrong place — but I often use mic preamps as line amps to add transformer coloration and the mic and line inputs use the same physical connector. I also have a 500‑series rack, and sometimes swap the modules around so slots might or might not host preamps.

I’d prefer to have access to all these ‘line’ devices from my main patchbay. What approach would you recommend as the best low‑risk strategy? Maybe just have a separate XLR panel and use male and female XLR‑to‑TRS patch cords to link to the main panel, so I have to think about it?

SOS Technical Editor Hugh Robjohns: You can certainly use TRS‑XLR adapter cables to get line sources into mic preamp inputs, and often that’s the most practical option. For 500‑series racks, if they’re likely to host any mic preamps, then I’d suggest connecting the inputs to the mic patchbay too. Alternatively, consider a dedicated 500‑series chassis for line‑level processors and another for mic preamps.

However, I’m not a fan of draping long patchcords around the place between bays, and especially not on a regular basis. So if patching line sources into preamps is something that’s likely to be a common requirement, I prefer to build in some dedicated tie‑lines to go from your main line‑level patchbay across to the mic preamp patchbay behind the scenes.

Typically, I’d have a couple of sockets on the main patchbay labelled ‘Mic Patch Tie‑line 1/2’ or similar, and on the mic patchbay I’d have a corresponding number of male XLRs labelled ‘Main Patch Tie‑line 1/2’. With this arrangement on your main patchbay you can patch your line output into a tie‑line using a standard patch cord, and then using an XLR‑XLR patch cable, you can link the tie‑line output into the preamp input on your mic patchbay.

For a guaranteed idiot‑proof system, you could install large DC‑blocking capacitors or an isolating transformer in the tie‑line wiring between two patchbays.

Obviously, this isn’t a foolproof solution; you could still accidentally leave phantom power on the preamp which would find its way back across to the line‑level source. However, I find the act of patching up tie‑lines forces me to think about what I’m doing and that reminds me to check the phantom is off before I complete the patch!For a guaranteed idiot‑proof system, though, you could install suitably large DC blocking capacitors or an isolating transformer in the tie‑line wiring between the two patch bays to ensure phantom power can’t make its way between the patchbays. The capacitor should be chosen for the device with the lowest output impedance: the lower the output impedance, the bigger the capacitor needs to be. In practice, a capacitor of 10uF or larger will do the trick.