Q. Can I reduce latency when using Dante Via and Cubase? 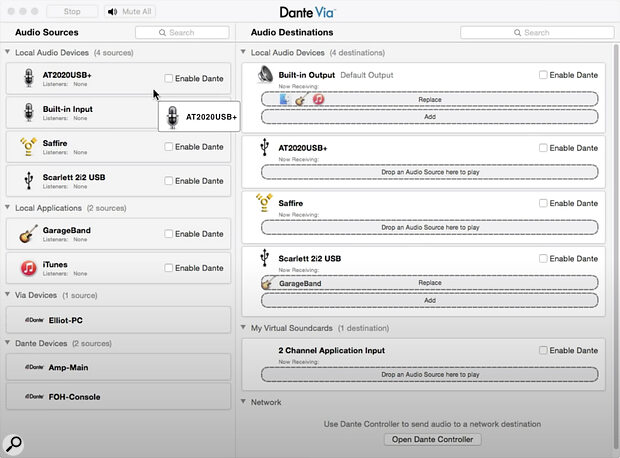 Audinate’s Dante Via software does allow you to send audio over a network between two computers, but without any Dante hardware the latency involved will be too much for applications in typical music recording studios. However, there are affordable zero‑latency analogue options for connecting a live room to a control room that will make use of the same Cat‑X network cables.

My little basement studio consists of one room for recording loud stuff and another as my control room, with an 18m cable run between them. Typically, I use up to six microphones in the loud room, and need maybe three cue returns for headphones. Analogue multicore wasn’t an option, as the large holes in the walls this required weren’t acceptable, and neither optical ADAT nor USB could cope with the distance. So that left Ethernet.

Consequently, I rigged a system comprising an RME Babyface interface with a fast, desktop PC in the recording room to handle the mics and headphone feeds. In the control room I had a Gigabit switch feeding the recording PC with Cubase 10.5 and an RME UC interface for monitoring. Dante Via software connected the two machines, with Dante Controller for routing. Everything clocked to 48kHz, and it all works… except that the latency is killing me! According to Cubase, it is 30ms, and I have to manually move the files on the timeline to sync playback and recording.

SOS Technical Editor Hugh Robjohns: The fundamental problem that you’re struggling with here is that you have software Dante interfaces on both computers. Dante was initially designed as a hardware interface, and professional Dante‑equipped consoles, preamps, stageboxes and so on, for which low latency is absolutely critical, use dedicated hardware network interface cards.

The Dante software interfaces are designed for use in situations where latency is not critical, such as a laptop eavesdropping on the network and recording everything for use afterwards. With the hardware Dante network interfaces, the console firmware interacts directly with the physical hardware, so data is transferred very quickly. However, software Dante interfaces have to negotiate through the host computer’s operating system, and its own network handling software, and that all takes time. Consequently, the typical latency for Dante Via is around 10‑15 ms. In your case, as you’re running two instances, the total end‑to‑end latency is going to be around 20‑30ms — which is exactly what you’ve found.

If you want the typical low‑latency (1‑3 ms) that Dante is rightly praised for, you need to use the dedicated hardware interfaces, I’m afraid... And that won’t be a cheap option!

If you want the typical low‑latency (1‑3 ms) that Dante is rightly praised for, you need to use the dedicated hardware interfaces, I’m afraid. In your case that would typically be a Dante network card in the control room PC and a hardware mic pre with Dante interface in the ‘loud room’. And that won’t be a cheap option!

However, what would be a cheap option — and still make use of the physical network cabling you’ve already put in place — would be one of the multi-channel passive analogue interfaces designed to connect to standard Ethernet cables. Lots of companies now make hardware boxes for this, and they simply use the four twisted pairs of a standard Ethernet cable to carry four balanced analogue signals. Obviously, this is a point‑to‑point analogue connection (you can’t route it via your Gigabit switch) and you need to use screened Cat‑X cables (ideally individually screened Cat‑7). But it is relatively cheap, and you get four completely latency‑free analogue audio channels per cable.