Q. How do I maximise loudness on tracks?

I have been recording music for quite a few years now, but I always get the same problem when I listen back to my mixes: mine are far quieter than any commercial releases. Can you give me any tips on how to get the sound louder without the track distorting? Or are there any effects I can put on a track to boost the volume?

SOS contributor Mike Senior replies: Maximising the loudness of final mixes is something of a contentious issue, with different professional engineers holding widely divergent views on the matter. Assuming that your mix is already peaking at 0dBFS, increasing loudness beyond this is always a compromise, because you inevitably have to change the recorded waveforms in some way. Whether the compromises of any particular audio process are sufficiently offset by the increase in loudness is a decision you have to make for yourself.

The best tactic is simply to line up your mix in your DAW alongside a couple of commercial mixes you rate, and process your mix to try to bring it into line. The higher the quality of your monitoring facilities, the better you'll be able to judge what you're doing. (With mediocre monitoring, you'll tend to overdo the loudness because you won't be sufficiently aware of the associated decreases in signal quality.)

So what processing might you try? Well, the least deleterious change I can think of making to increase loudness is to high-pass filter the mix at a very low cut-off frequency (for an example, see the screenshot on page 20). If you have any DC (0Hz) signal on your recorded tracks, this can offset the whole audio waveform such that it clips earlier than it should; high-pass filtering will remove this. You can also use the high-pass filter to cut any low-frequency rumble you don't want, which will give you more headroom to fade up the overall track level.

While we're on the subject of EQ, it's worth mentioning that the human ear isn't as sensitive to high and low frequencies as it is to the mid-range, and people tend to interpret brighter sounds in particular as being louder. If you can detect a tonal difference between your track and your references, I'd recommend trying gentle shelving EQ cuts to match the sounds more closely in the first instance.

You might also want to have a look at plug-ins like Logic 's Match EQ and the TC Works Assimilator, or the stand-alone utility Harbal. These all compare the frequency content of a reference track with that of your own mix, and will suggest an EQ curve to match the two automatically. Just be sure to take the suggested EQ curve with a pinch of salt, as the automatic process is unlikely to be foolproof.

Subtle tape, valve, or transformer distortion processes can be a very nifty way of increasing the subjective loudness with very little increase in metered signal level. There are masses of software options here, such as Silverspike's freeware Rubytube or the Magneto plug-in built into Cubase SX2. Some nice hardware possibilities include the DRG process built into a number of TC Electronic's rack processors, or the lovely multi-band tube processing (shown on the left) in Drawmer's DC2476 Masterflow unit.

Compression can give comparatively transparent increases in loudness, especially with low-ratio (below around 1.3:1) and low-threshold (between maybe -30dBFS and -50dBFS) settings. Full-band compressors will be more tonally transparent in this role, but multi-band models can usually add more loudness without pumping artifacts, albeit with the side-effect of dynamically tampering with the tonality of the mix.

For rock and dance styles, full-band compression can be used with higher threshold and ratio settings to create an illusion of extra loudness through pumping compression effects. If you want to experiment with this, try starting with a 2:1 ratio, a 1ms attack time and about 100ms of release time. If you then set the threshold level so that the compressor reduces the gain mainly on drum hits, you should hear a pumping effect, and you can adjust the ratio and release time to regulate the strength of it. 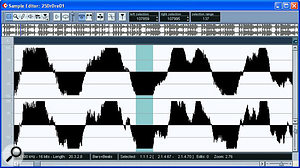 The zoomed-in waveform of a kick-drum hit from Dr Dre's 'The Watcher', from the album 2001, showing that the track has been clipped to increase its loudness. The highlighted region in this screenshot clips around 140 consecutive samples.If you find that compression pumping is knocking the bass frequencies out of your kick drums, you may want to increase the compressor's attack time to let more of the sound through before the compressor clamps down. Alternatively, you could high-pass filter the compressor's side-chain to decrease the gain-reduction element's sensitivity to low frequencies.

Limiters are often used to give a loudness increase, and can manage a comparatively loss-free increase of several decibels in the right circumstances. There are now lots of full-band and multi-band models available, but one side-effect I'm not fond of with any of them is that they tend to cause any heavy drum sounds in your track to lose punch and to sink back into the mix. For less percussive material, the trade-offs of processing depend on how you the limiter's release time is set, but the main things to listen for are unwanted pumping effects and bass distortion.

If you've tried all of the above and you're still short, then maybe it's time to zoom in on the waveforms of your reference tracks to see whether they've been clipped. Although clipping is frowned on by many engineers, the practical reality is that clipping is all over commercial releases in many styles, so you need to give the issue of clipping serious consideration in order to decide where you stand. The main sonic disadvantage of clipping is a type of distortion which in itself is pretty unmusical. However, many engineers take the view that a degree of clipping can be well enough disguised under certain circumstances that it becomes a reasonable price to pay for a considerable loudness hike.

The first main situation where it's often used is when the track has a lot of fuzzy sounds, such as distorted electric guitars, into which the clipping artifacts can fairly easily blend. Some stark examples of this are The Darkness' 'Growing On Me', Chemical Brothers 'Block Rockin Beats', and Pink's 'Feel Good Time', to name a few.

The other common use of clipping is in music styles that are very drum-heavy, such as rock and hip-hop, and here the technique is to clip mainly just the drum beats. Unless you drive things too far, the burst of distortion on each hit tends to be perceived mostly as an alteration in the tonality of the drum hits, rather than as distortion per se, so many producers are happy to take advantage of that. To take one example, Dr Dre's 2001 album frequently clips in excess of 100 consecutive samples on its kick-drum hits (see the screenshot on page 22), and that kind of clipping is by no means out of the ordinary in a lot of modern commercial music styles.

The only thing I would say is that no matter what you do, you should always make a habit of retaining a completely unprocessed version of your mix file for safety's sake. Not only will this mean that you don't burn any bridges if you decide at a later date that you mucked up your settings, but it also means that you can always still take your material to a professional mastering house if you want. Their specialist equipment and engineers will be able to get much better (and louder) results from an unprocessed file than from a processed one.