Q. Is ADAT format better than USB or Firewire? Skip to main content

Q. Is ADAT format better than USB or Firewire?

Many modern USB and Firewire audio interfaces, including the Focusrite Saffire shown here, feature ADAT inputs and outputs. They can be used, along with additional A-D and D-A converters, to increase the number of analogue inputs and outputs that can be routed into and out of software, and allow the user to upgrade their setup (adding higher quality preamps, for example) at any time after purchase.

From what I understand, Firewire and USB seem to be the best formats for audio interface connection in the home studio. I have been looking at the Presonus Firepod, the M-Audio Project Mix and Focusrite's Saffire Pro, and I've noticed that most have an ADAT option for getting more tracks into a DAW. I was wondering how I would go about setting this up and if ADAT is better quality than Firewire or USB.

Features Editor Sam Inglis replies: The answer to your question is, as you probably guessed, a bit complicated. First, in a setup that's working properly there should be no fundamental difference in sound quality between digital audio transmitted over ADAT and the same transmitted over Firewire or USB, with the exception that the basic ADAT protocol is limited to a 48kHz maximum sample rate. The main reason that lots of audio interfaces offer ADAT connections is that, for the manufacturer, it's a cheap way of offering a high number of inputs and outputs. Most of them reason, quite rightly, that not all buyers will need 16 or 24 channels of analogue I/O, and that analogue I/O is comparatively expensive to provide; so, instead, they provide eight or 10 channels of analogue connectivity plus ADAT ports as an affordable means of expanding this. Connecting two ADAT-equipped pieces of gear is really easy, you just need an optical cable. Things can get more complicated if you have multiple ADAT or other digital formats, because you can run into clocking issues, but I can't see that this will be a problem in your situation. 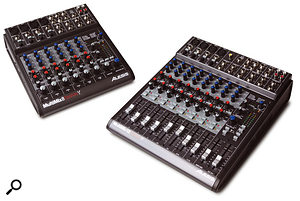 Alesis' Multimix Firewire 8 (right) and 12 (left) combine the convenience of a built-in Firewire interface with the layout and routing options offered by a conventional mixer.

The best way to go about specifying a system is probably to think about exactly what features you need, and only then look at the different ways of implementing them. For example, in your situation I think that there would be very good Firewire, USB and also PCI-based interfaces that would be suitable; it's really a question of thinking about how many channels of I/O you need, how many mic preamps you need, and what your preferred arrangement for monitoring is. Many people recording live bands still prefer to set up monitor mixes in the analogue domain, so those people would more likely be drawn to using an analogue mixer as a front end, with line outputs from the individual channels going to a multi-channel interface. Manufacturers such as Mackie and Alesis now make analogue mixers with built-in Firewire outputs so that you can connect them directly to your Mac or PC without having to buy a separate interface.