Q. How do I remove the noise from my lavalier mic recordings? 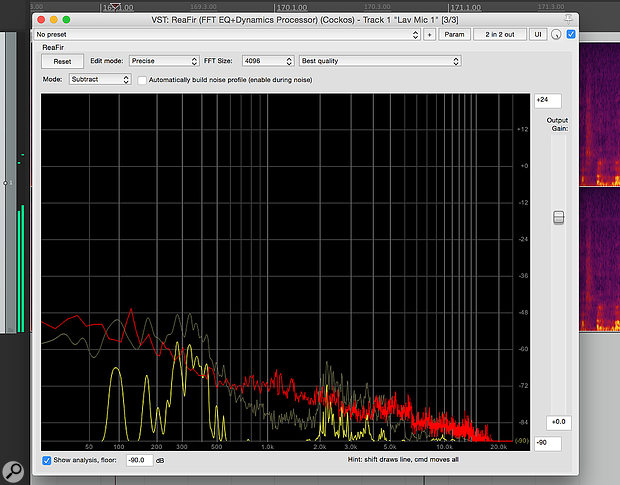 ReaFIR is typical of the FIR-based noise reduction software that captures and analyses a ‘fingerprint’ of the offending noise and then attempts to remove it from the wanted signal. But no such processor will give you perfect results — it’s much better to eliminate noise at source where possible.

I need to do some recording of spoken word, using a cheap and cheerful lavalier mic. The actual tonal character of the thing is perfectly good but it’s noisy — there’s a steady ‘hiss’. It’s nothing too offensive, but still, I don’t want that in my recordings! If I EQ the hiss out then the sound of what I want to hear suffers. Is there some plug-in that can reduce said noise, perhaps by taking a sample of it and then adding it out of phase? I’m using Cubase 7 on a PC, and looking to spend little or no money!

SOS Reviews Editor Matt Houghton replies: You can find noise-removal software that can tackle hiss for little or no money. But it always leaves you with a compromise: remove all the noise, and you’ll leave far too many artifacts; remove too little and you can avoid the artifacts but the noise will still sound annoying.

So if you’re yet to do this recording, I’d invest in (or borrow) a better lavalier mic. About £100-$150 should get you something perfectly usable by Sennheiser or Rode, for example. If you’re planning to do this sort of work a lot, then such a mic will easily earn its keep. And if you don’t do this a lot, then you can sell the mic after the session and claw back most of your investment. If you still feel you can’t afford a better lavalier, though, consider using another higher-quality mic you already own — a directional (cardioid or super-cardioid) mic pointing at the source should work; and if the source is on-camera, just keep it out of shot, either above or below.

If you or someone else has already done the recording, and it’s suffering from such noise, then you could try Cockos’s ReaFIR plug-in. It’s free for Windows users as part of the ReaPlugs pack, and you can use it within Cubase. For both Mac and Windows, it’s included in the modest price of admission for their DAW, Reaper. The only other free noise-removal facility I can recall at the time of writing is the one that’s built into Audacity, though I’ve not used it myself. If spending money, you could invest in any number of paid noise-removal plug-ins, most of which operate in a similar way to ReaFIR. Better still is iZotope RX, which includes a number of other tools to help you tackle unwanted bumps, clicks and undesirable noises.

Alternatively, do you have any video editing software? Many NLEs include a noise-removal facility that’s capable of giving you usable results (I’ve achieved OK results from the ones in both Screenflow and Final Cut Pro). But, as I say, none of these will completely eradicate the hiss without leaving unwanted, unnatural-sounding artifacts, and depending on the nature of the noise you might not even be able to reduce it sufficiently to make a satisfactory difference. (There’s a good reason why we keep banging the drum about capturing what’s as close as possible to the desired sound when recording!)