Q. How should I compress a classical recording? Skip to main content

Q. How should I compress a classical recording?

I recorded a performance of Handel's Messiah recently, and I was wondering what the common practice is when compressing the whole mix in classical recordings. During the session, I put a compressor over the master outputs, just to catch any stray peaks, and when fiddling around with the settings I found that a low threshold and a low ratio helped to blend the mix as a whole and fattened it up. Is this acceptable? 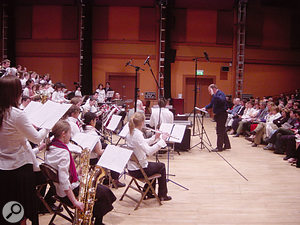 Recordings of classical music typically have an incredibly wide dynamic range. In this example waveform (above), for instance, the audio level is generally very low, except for the explosive section about three-quarters of the way through. Sometimes the best way to reduce this dynamic range is to manually ride the fader on mixdown, or draw in volume automation to drop the level of the loudest parts by a few decibels. Once you've done this, you can make up lost gain by turning the signal up at the output stage. SOS contributor Mike Senior replies: The question is what you're trying to achieve. With a piece like this, which has a wide dynamic range (between the quieter Recitatives and the full-scale Hallelujah chorus), I'd certainly recommend reducing the dynamic range a little to make the CD more suitable for home listening. The most transparent way of doing this would be to use simple fader automation, riding up the quieter sections to make them more audible. I wouldn't go for much more than about a 6dB increase to the quietest sections if you're unsure how far to go. The advantage with this approach is that a human engineer can intelligently anticipate changes in the signal in a way that no compressor can.

Another thing you can also deal with using fader automation (or even audio editing) is ducking any brief signal peaks which are unduly loud, which allows you to achieve a louder final CD. Some might suggest limiting or even soft-clipping to achieve a similar effect, but neither will sound as transparent, so I'd stick with fader automation myself.

If you're wanting a little more detail and ambience to the sound, by all means try the low-ratio, low-threshold compression you mentioned, as this will usually work fine on most types of music. Don't stray over a ratio of around 1.1:1 for classical recordings, though, if you want to play things safe, and if you're getting gain-reduction of more than about 4-5dB, you've probably got the threshold set too low. I'd personally set the attack time fairly fast to track the signal levels pretty closely, and then go for faster release times for more detail/ambience and longer release times for less detail/ambience, but this will inevitably be a matter of taste. Any isolated accented chords will be particularly revealing of potentially unpleasant compression artefacts, so listen out for how those sound.

You might be tempted to use multi-band compression with similar settings, as many people do when working with more modern music styles, but I'd steer clear of this, to be honest. The fluctuating tonal changes that arise from this kind of processing are likely to upset the delicate balance of the performance.

A more transparent approach to compression is to use a compressor as a send effect, mixing the compressed signal in with the unprocessed one — this is often referred to as parallel compression. For this to work, you need to make sure that the compression processing doesn't also introduce any delay, otherwise you'll get a nasty kind of static phasing sound. That said, most software DAWs now have comprehensive plug-in delay compensation, so this is becoming less of a problem for people these days.

When working like this, you can usually get away with slightly heavier compression, but I'd stay below a ratio of 1.3:1 to be on the safe side. What some engineers do is automate the compressed channel's fader, rather than the main channel's, adding in more of the compressed signal during quieter sections. This can work really well, as it's often when the music is quietest that it benefits most from added detail.