Q. How steep should I make a high-pass filter? 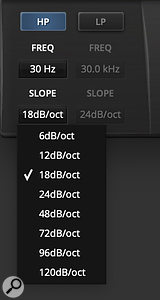 In software, high-pass filters can be as steep or as gentle as you like — but they can affect more than just frequency, and in some cases can affect how you perceive sounds other than the one you're filtering!

I'm a music technology teacher and, based on advice from a local studio producer who's helped us over the past few years, I've always advised my students to set their high-pass filter slope at a steep setting of 48dB per octave to reduce boominess. However I see that Mike Senior has suggested starting with a moderate slope of 18dB/octave in his Mixing Secrets book, so I'm wondering what might be the best advice to give my students, who are very much at the beginner stage. Is it best just to tell them to go for 48dB, or is 18dB going to be more appropriate in general? I know the effect of these settings in theory, but would find it very difficult to know/hear their effect in practice.

SOS contributor Mike Senior replies: This is a good question. You're right that in principle it seems as though a steeper slope would be better at removing the stuff you don't want without impacting as much on the content you do. But steep filters introduce more processing side‑effects in the time domain, mostly 'ringing' (where frequencies around the cutoff resonate somewhat) and phase shift (where different frequencies are effectively delayed by different amounts relative to each other). These side‑effects are most likely to impact on percussive sounds, where the phase shift may soften transients and the resonance may cause the low end to be less 'tight' and controlled in terms of how fast the sound decays. The phase shift will also be more likely to cause unpredictable results where you're dealing with mic signals that have a phase relationship — drum-miking setups, say, or multiple mics on an electric guitar cabinet.

What I mean by that is that your filtering won't only affect the frequency response of the track you're filtering (say, a snare close mic), but also the phase interactions and comb-filtering against other mics in the setup (primarily the overheads and hi-hat mic in this example). None of these side‑effects are usually huge, but mixing's all about lots of small incremental differences, so even minuscule side‑effects like these can add up if you multiply them across most of the tracks in a mix.

Your filtering won't only affect the frequency response of the track you're filtering, but also the phase interactions and comb-filtering against other mics in the setup.

Even setting aside any issues of unwanted side‑effects, though, there's another reason to be careful filtering pitched instruments with steep filter slopes, and that is that it makes the balance between a note's fundamental frequency and its harmonics more variable, depending on where each note's frequency response happens to fall on the high-pass filter's curve. So a note with a fundamental at 80Hz, say, might end up with its fundamental 24dB or more down compared with the note an octave above it, which may cause you balancing problems when you are trying to get a wide-ranging musical line to sound consistent. The gentler the slope of the filter, the more equitable the low cut is across different note pitches in this respect.

Now all this is not to say that I never use super-steep filters, because I do on occasion. When I do, though, it's almost always for removing unwanted low-frequency rubbish, rather than for audible tonal rebalancing. In general, I prefer to start with a gentler slope and get steeper where it's necessary, rather than the other way round. Maybe that's just me not being rock & roll enough, though!