Q. Do digital effects always cause problems when used via an aux send? 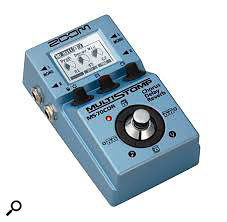 All digital effects introduce a little latency. It's not normally problematic, but with some processing setups you'll need to listen out for comb-filtering.

I've got a Zoom MS-70CDR [multi-effects] pedal, and a few people are saying not to use it via an aux send and return, owing to a comb-filtering issue. I'm wondering about this, as I've got it hooked up to my mixer on an aux send, and it seems fine. Either that or this problem is very subtle and I'm not hearing it. Have you noticed this issue with digital pedals on aux returns?

SOS Technical Editor Hugh Robjohns replies: Any digital effects box has to have A‑D and D‑A converters to get analogue signals in and out. All A‑D and D‑A converters introduce a short delay due to the filtering requirements, and at base sample rates, the 'round-trip' delay can be anywhere from 0.75 to 1.5 milliseconds or so. If you split a signal, run one path through a short delay, and then combine it back with the original (at the same level), there will be comb-filtering because the delay causes different relative phase shifts at different frequencies.

So at some frequencies the direct and delayed signals will partially or even fully cancel, while at others they will tend to add and those frequencies will be boosted. The result is that typically nasal-sounding coloration — a static phaser or flanger, if you like! (It won't sound quite like a phaser or flanger because the delay time isn't varying in this situation, but hopefully you know what I mean.)

However, if the delayed path signal is radically different from the direct path signal, either in level or content (such as being pure reverb rather than the original signal), the cancellations and additions will be either greatly reduced or non-existent... and that's probably why you haven't yet noticed anything; your spacious reverbs and delays are too different from the source signal to produce any significant cancellations/additions.