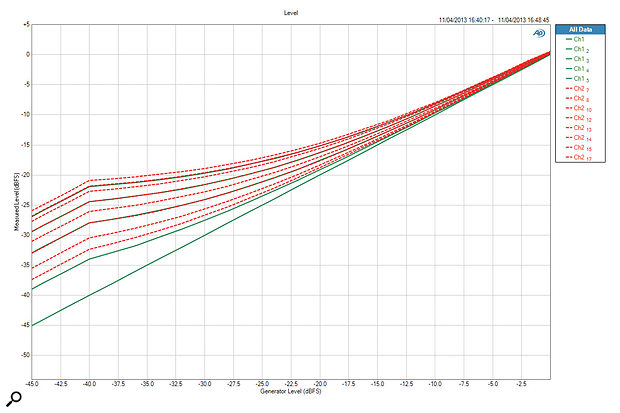 I thought Hugh's Robjohns' Parallel Compression feature in the February 2013 issue (read it at /sos/feb13/articles/latest-squeeze.htm) was excellent and informative. However, I'd like to argue a bit about the benefit of adding multiple identical parallel compressors, though. Let's assume for a while, to avoid getting bogged down in details, that we're talking about a plug-in compressor, such that two instances of it produce a bit-for-bit identical output if given bit-for-bit identical inputs.

For example, if I wanted to parallel compress a signal such that the quiet parts are amplified by 12dB, I'd set up three sends (according to picture 5 in the article), and feed them identical inputs from the dry channel. In this case, each of the compressor channels produces an identical output.

A similar logic leads to the same conclusion (using a different gain) with any number of identical parallel compressors and their relative gains.

The point here is that I don't see the advantage of using multiple identical compressors over just raising the gain of the single compressed channel above unity. Am I missing something? In case the compressors are different, there can, of course, be a change in the tone, so that is a different matter.

SOS Technical Editor Hugh Robjohns replies: It's taken a while to revisit this, but I have now reconstructed the setup I used for the original feature article and then augmented it by using a single parallel compressor with varying levels of make-up gain.

Having thought about this over the intervening period, I came to the conclusion that Timo was entirely correct, and in fact it is obvious that, when using identical parallel compressors with identical settings, the result of summing their outputs is exactly the same as boosting the output of one. It was a "Doh!” moment, really. Sorry about that!

I have now recreated the original test setup using a SADiE DAW and its default compressor plug-ins, and re-measured the responses on an Audio Precision test system via AES3 connections with none, one, three, five and seven compressors, all running with thresholds of -40dBFS, ratios of 50:1, and 0 gain make-up. Those are the five green lines on the plot shown above, and are exactly the same as the plot in the feature article.

I hope you find the plot and information useful, and I'm very grateful to Timo for bringing this to my attention.