Q. Should I always pan my vocals to the centre of the mix? 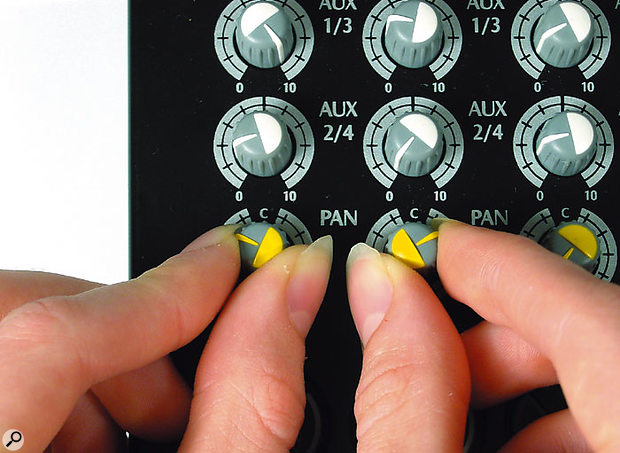 It's up to you whether you choose to follow the accepted panning conventions, or try something a little less predictable.

I'm about to do some mixing and I'd just like to find out if there are any right or wrong ways to pan my audio. I'm sure I've read somewhere that vocals should always be panned centrally, as well as the bass, while it's OK to pan other things like guitars and the spread of the drum kit.

SOS contributor Tom Flint replies: It does seem to be standard practice to pan lead vocals, and often the bass, centrally, and some people believe that this configuration is a must. Nevertheless, there is nothing to stop you breaking such 'rules', if you have good reason to do so.

Although the mixing conventions you've mentioned are now well established, when stereo recordings first became commonplace in the 1960s, no-one was really sure how best to use the format. You only have to listen to a few compilations of songs from that era to hear some pretty interesting panning!

Today, most people have become accustomed to thinking of the output of a stereo speaker pair as a single, even spread of sound, with the most prominent elements of the mix, such as lead vocals, appearing in equal amounts in each speaker. This is easily achieved now that we often have every element of a recording on a separate track, and the freedom to pan each track anywhere in the stereo field — but in the early days of stereo, recordings were often made to three or four tracks, and panning options consisted of hard left or hard right. Some engineers thus treated stereo as providing a second speaker which they could use to showcase their lead instrument or singer. This would, therefore, often be panned totally over to one speaker so that it would stand out, leaving the majority of the other instruments and backing vocals in the other speaker. Many songs mixed in that way actually still sound very natural.

It's perhaps worth noting that those records which featured extreme panning usually still had a little vocal appearing in the opposite speaker, and some instrument spill beneath the vocal, providing a unifying ambience. Sometimes the spill would have been a result of everything being recorded in one room, although the practice of playing a recording into an echo chamber, recording the result, and using it in the mix, was also common.

One of the reasons that the modern stereo mixing convention of placing the vocal in the middle prevailed was that it's the best way to ensure that the recording will work on the majority of sound systems. If, for example, a listener has a dodgy speaker, or has placed one behind the sofa, a panned vocal could be lost or compromised. Therefore having the most important thing in both channels ensures that the core of the song always remains intact.

Bass guitar, and usually the bass and snare drums in a kit, are also placed fairly centrally these days, so that the punchy sounds which tend to drive a track along are evenly spread, giving the recording a unifying balance in both speakers. Panning low bass sounds centrally also allows a vinyl record to be bassier without causing the needle to jump. Other instruments are less unsettling when panned to extreme positions, and tend to be scattered across the stereo spread to increase the perceived width of the sound picture.

In recent years, surround sound has forced engineers to choose between a number of different mixing strategies, each one suggesting a different way of spreading a mix across the array of speakers.

When mixing a band, for example, in 5.1, some engineers like to have all the instruments spread out across the front speakers so that the listener feels as if they are sitting in the audience in front of the stage. The rear speakers are then used for ambience effects, emulating the reflections the listener might hear from a concert hall's walls.

More experimental mix engineers have tried placing instruments, and even separate notes and beats from instruments, all around the room, arguing that a recording can be a unique listening experience, not necessarily a realistic reproduction of a live event.

Even though there are strong arguments supporting both these examples of mixing approaches, in my opinion, it is likely that over time surround mixing will become more and more standardised, and the resulting recordings progressively more conservative, just like the development of stereo mixing.

At the end of the day, it's up to you whether you follow the accepted panning conventions, or elect to go for something a little less predictable. Either way, the success of your mix may well hinge on something other than panning, like the relative levels of the individual parts of your mix.