Q. Should I believe my meters?

I read recently that the level meters in most DAWs don't give a true indication of when audio is peaking, and that audio which looks like it's below 0dBFS may actually be peaking above it, causing distortion when it's played back. Is this true? I want my mixes to be as loud as possible and use compression to push them as 'hot' as I can. How do I tell when and if these invisible overloads are occurring, and how do I avoid them?

Technical Editor Hugh Robjohns replies: The problem you are referring to is a very real and widely recognised one. Simple digital meters register the amplitude of the individual samples within the digital domain and not the waveform which is reconstructed from them by the D-A converter. Even if the samples stay just beneath 0dBfs, the reconstructed waveform, which is, after all, a smooth curve, is likely to exceed full-scale at certain points, potentially causing overmodulation and digital distortion. 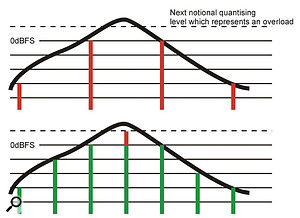 Top: A perfectly legal digital signal with no samples higher than 0dBFS. However, this signal will overmodulate a typical oversampling digital filter in a D-A converter. Bottom: An oversampling meter will reveal the overload.This overloading generally happens in the integrated digital filters employed in most consumer and budget D-A converter designs. The state-of-the-art converters used in professional environments tend to be far less prone to this kind of problem, and consequently, a mastering engineer may not be aware of a problem which is glaringly obvious when the track is replayed over cheaper D-As. The problem is likely to be worst in heavily compressed material.

It's important to understand what the different types of meter are actually measuring. VU meters read averaged signal levels and don't give any indication of peak values whatsoever. The VU meter was designed to provide a crude indication of perceived volume (hence 'volume units'), originally in telecommunications circuits, and so served its original purpose perfectly well. It was only when the VU meter was adopted by the recording industry that its limitations became significant.

Subsequently, the PPM or peak programme meter was developed. This has complex analogue circuitry designed to register peak signal levels, so that the sound operator can better control the peak modulation of recordings and radio transmissions. However, the international standards defining the various versions of PPM all include a short integration period of between 5 and 10ms. This means that, in fact, the meter deliberately ignores short transients. True peak levels are typically 4 to 6dB higher than a standard PPM would indicate. This deliberate 'fiddling' with the meter's accuracy was done to optimise the modulation of analogue transmitters and recorders, safe in the knowledge that the short-term harmonic distortion caused by a small amount of overmodulation of analogue systems was inaudible to the majority of listeners.

Now we come to digital meters. These have to show true peak levels because any overloads in the digital domain cause aliasing distortions — distortions which are anything but harmonically pleasing and extremely audible. However, the inherent difficulty in achieving true peak readings from raw sample amplitudes, as described above, is one reason why it is advisable to engineer in a degree of headroom when working in the digital domain. Oversampling digital meters, which are far more accurate in terms of displaying the true peak levels, have been available in professional systems for a long time, and Trillium Lane Labs have recently produced an oversampling meter plug-in for Pro Tools TDM systems running on Mac OS X, called Master Meter.

You can circumvent the problems of inaccurate metering and the resulting potential for overmodulation by working at 96kHz. Even simple sample-based metering at this sample rate is essentially oversampled as far as the bulk of energy in the audible frequency range is concerned.

But the simplest solution, as ever, is to turn away from the notion that a track has to be louder than loud, and to leave a small but credible headroom margin. If you really want to overcompress particular genres of music, that's fine, but remember to leave a decent amount of headroom. There's really no need for recordings to hit 0dBFS, nor for recording musicians to misuse the digital format, and CD in particular. If the end user wants the music louder, there is always the volume control on the hi-fi!