Q. Is there a better way of controlling sibilance than a de-esser? Skip to main content

Q. Is there a better way of controlling sibilance than a de-esser? 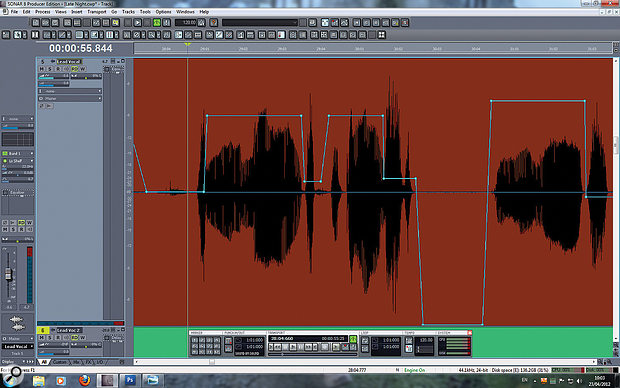 The vocal immediately following the Now Time marker (green line) sings 'Too late a ghost'. The 'T' of 'Too' is attenuated, after which the automation line rapidly slopes back up to reach the track's general level. The next attenuation is the 'T' in 'Late', which almost stands on its own and is easily tackled. Finally, the 'S' and 'T' at the end of 'Ghost' were reduced together.

A recording of mine is suffering from excessive sibilance, so I have tried processing it using a de-esser. The problem is that the processing seems to be having a detrimental effect on the sound of the vocal. Is there another way I can get rid of the sibilance, or something I can do differently?

SOS contributor Tom Flint replies: Ideally, a de-esser should automatically attenuate troublesome sibilance without its actions adversely affecting the perceived quality of the audio, but the problem is that a static set of de-esser parameters often doesn't work well for an entire performance. Not all of the sibilants within a single performance will be equally objectionable, and the energy in different sounds such as 'S' and 'T' might occupy different frequency ranges. One solution is to automate the threshold and frequency parameters of your de-esser so that it only works as needed, but my feeling is that if you're going to get into using automation to control sibilance, it makes more sense to directly automate the level of the vocal track within your DAW. It can be time-consuming, but offers precise control over each individual instance of sibilance, and enables you to visualise the problem within your DAW's arrange page.

The first thing to do is to enable level automation on the vocal track, and display the volume parameter for editing with the mouse. The next thing to do is find the first problem instance of sibilance. I use the horizontal and vertical zoom controls to expand the waveform until the contours of the word containing the problem are clearly defined. It's often possible to identify the syllables in a word just by looking at it in close-up.

Once you've identified a problem sibilant, create a pair of automation nodes at either end, in effect bracketing that syllable. You can then select the two innermost nodes and drag them down to reduce that sibilant in level without affecting the rest of the track. I very occasionally find it necessary to add a few more nodes while getting the shape right, and delete those that turn out to be superfluous at the end. Having a small number of nodes is good practice as it means that level adjustments can be done quickly by moving a single line. The screen above shows a short phrase in Cakewalk's Sonar with level automation used to control sibilance in this way.

After attenuating the worst instances of sibilance, I listen through to see how natural the overall performance is sounding. It may be the case that after reducing the level of the main offenders, the ear becomes less bothered by the others and a more lenient approach can be taken thereafter. Sometimes as little as a 3 or 4 dB drop in level results in a significant improvement, but it is also very surprising how much reduction can be applied without it sounding at all odd. The most important thing to note is that although you can often identify syllables visually, only your ears can tell you how much attenuation is needed, and how much will sound natural. In other words, what sounds right is right. Manually automating the level provides an opportunity to make alterations that better suit how the brain interprets what it is hearing.

One of the great advantages of using automation to control sibilance is that you're not limited to applying it just to the level of the track. For instance, it's often the case that sibilance is exaggerated by auxiliary effects such as reverb or delay. If this is the case, try copying your automation curve to the relevant send parameters on your vocal track, then scaling it drastically so that the level of those sends is heavily attenuated for sibilants. Likewise, any high-frequency EQ boost on your vocal track can make sibilance worse, so try copying the same automation curve to the gain parameter on the relevant band of your EQ plug-in.

When the level automation is complete, overall level adjustments can be made by sending the channel to an intermediate bus and using its fader to boost or cut by the required amount, thereby leaving the sibilance control automation undisturbed.