Q. What gear should be burnt in before use?

Is ‘burning in’ studio equipment (monitors, headphones, tube gear, and so on) of benefit to certain types of studio gear, or is it all just Internet hype?

SOS Technical Editor Hugh Robjohns replies: This is a widely and hotly debated topic which usually creates very polarised views. For the uninitiated, ‘burning in’ is claimed to be the electrical equivalent of ‘running in’ a car engine (not that it is necessary to do that any more); a process intended to help the device in question ‘settle down’ into its normal working condition, usually with claims of significantly better audio performance as a result.

Putting the better-performance argument to one side for a moment, the one inevitable aspect of burning in is that it will happen anyway as the equipment is used, so whether it’s a genuine phenomenon or not, all equipment will inherently become run–in quite automatically. We have no choice in that. I’d therefore suggest that it’s not something that warrants any real concern or effort in the vast majority of cases.

Returning now to the ‘better performance’ argument, my personal view is that there is credible science to explain why the technical performance might change during the initial period of use in some very specific cases, and I’ve personally experienced persuasive first–hand evidence of burning–in on several occasions. In general, though, I think many of the claims are little more than a misguided explanation for a period of increasing familiarity with the sonic characteristics of a new piece of equipment. 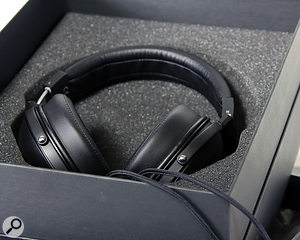 When opening the box of your latest swish reference headphones, should you suspend your excitement until you’ve broken them in? We can emphatically say... ‘definitely maybe’!The specific cases I mentioned apply predominantly to the performance of some power–handling electro–mechanical transducers — by which I mean loudspeakers of various types. The technical parameters of some drive units can change slightly during their initial use because of the way the various materials employed in their construction flex and move, and the glues and dopes cure over time. To illustrate this concept in an everyday scenario, I’m sure we’ve all experienced the way in which formal leather shoes soften and become more comfortable after some use, for example.

The question of whether such drive-unit parameter changes become audible or not will depend entirely on whether those parameters play a critical part in the whole design’s overall performance. In some designs, a 10 percent change in compliance might have a very noticeable effect, and in others it might remain completely inaudible but, for the record, I’ve personally witnessed the effect of drive unit burn-in with various monitor loudspeakers. To put it into context, I’ve auditioned countless more monitors that appeared to have no burn–in effect whatsoever. I’ve also heard the effect first–hand once or twice with some types of high–quality headphones, too, but I should point out that I am in the unusual position of being able to make direct comparisons of brand-new and run–in products more easily and more often than most consumers.

When it comes to straightforward electrical components, like cables, the concept of burning in makes no sense whatsoever to me, and I can’t say I’ve ever noticed any kind of cable burn–in effect. I’ve never noticed it with electronic hardware either, whether it’s solid–state or thermionic (ie. valve) gear — although I have most definitely heard the effect of temperature variations in some electronic equipment as it warms up to a normal operating temperature. Again, the performance of some equipment might be temperature dependent, and other designs not at all, but this might be something which could well be mistaken for burning in.

Importantly, burning in is something which can only ever happen during the first few hours of use, and most electronic hardware manufacturers run ‘soak testing’ as part of the factory’s quality–control testing process. This is where the device is left powered–up for hours or days to test for early electrical component failure, because statistically it is most likely that a new product will fail very soon after manufacture. If it doesn’t fail in the first few hours or days, the chances are it will work reliably for a long time: a graph of failure rate versus time is known in the industry as the ‘bathtub curve’, because the failure rate drops steeply after manufacture to settle at a low rate, before eventually rising again as components reach the end of their working life! However, soak testing tends not to be applied to electro–mechanical devices, and perhaps that’s another reason why the effect of burning in is more likely to manifest with these devices than electronic hardware.

I take an entirely pragmatic view to burning in. If a brand new product doesn’t sound entirely right when I first start using it, I just leave some audio running through it and go off and do something else for a while instead. If it sounds better when I return, it may have completed a burn-in process or maybe I’ve just become used to it! And this last point is not meant to be as flippant as it sounds — there’s no doubt at all that we become familiar with the characteristics of things over time, and any change from that familiarity immediately seems wrong, until we become familiar with the new condition. Try altering the angle slightly of the seat backrest in your car, for example. Initially it will seem ‘wrong’ but after a week it will feel entirely normal, and resetting it to the original position will then be ‘wrong’! That process of becoming familiar with a new condition, or new sonic characteristics, may well be what some claim to be the burning–in period — but it’s the listener that’s actually ‘burning in’ rather than the equipment itself!