Q. What should I look for in a PC for music? 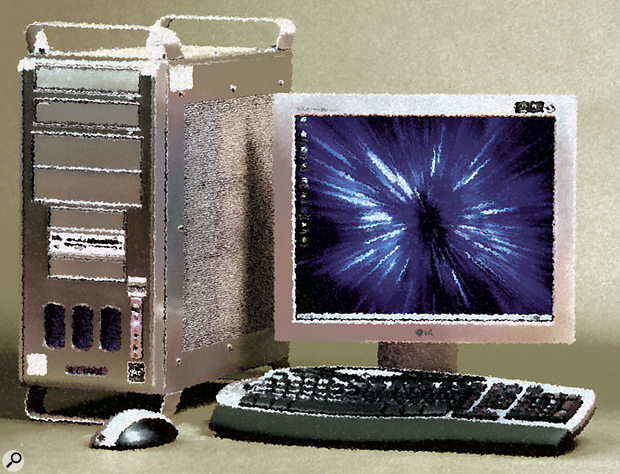 I've started buying your magazine recently, and first of all would like to say that it's a great read and full of useful features. I'm a DJ who's looking to get into the production side of things. I haven't got a massive budget — I'm looking at around £1500 — but would like to get a system with reasonable spec. I was going to opt for a PC over Mac as I have always used PCs, and I get the impression that Macs are more expensive.

What should I be looking for in terms of processor speed, memory, soundcard and so on? I'm going to be using it almost solely for music production (house and techno).

Bearing in mind I haven't produced before and will be teaching myself, I would like the software to be relatively straightforward, but also not so basic that I'll have to upgrade in the near future. What would your recommendation be (Cubase ? Reason ?) to get me up and running? Aside from a keyboard, am I right in thinking that I can do everything — synths, sampling and so on — I need to on a computer, or will I need lots of other hardware?

Features Editor Sam Inglis replies: Macs and PCs each have their own strengths, but I think it's fair to say that, pound for pound, Macs are more expensive than PCs. If you're used to using PCs, it's probably best to stick with what you know.

While in the case of Macs there's only one manufacturer (Apple) and only one range of models and options to get your head around, there are numerous manufacturers of PCs and PC components to contend with. There's also a lot of argument about the 'ideal' specs, but generally I think most people would agree on some points.

Both Intel and AMD processors have their pros and cons, but in either case, stay away from the cut-down versions like Intel's Celeron line. Go for a proper Pentium 4 or AMD Athlon processor, and get the fastest you can afford. Lots of memory (RAM) — consider 512MB as a bare minimum — and a decent-sized hard drive are also essentials.

It's not a good idea to skimp by getting a cheap motherboard from an obscure manufacturer. Stick to mainstream choices like Intel for Pentium 4s or Asus for AMDs, otherwise you can run into compatibility problems with some soundcards and other peripheral hardware. Acoustic noise is another factor you need to bear in mind: some PCs can be very noisy when the cooling fans kick in, so do some research on the case, motherboard, power supply and graphics card you're considering, and consider the various options available for reducing and damping fan noise. These include lining the case with deadening material and fitting special low-speed or temperature-controlled fans.

As for soundcards, the only general truth is that it's much better to get a card specially designed for audio recording than a consumer card designed more for computer games or home cinema surround sound. Whichever soundcard you choose should have ASIO drivers as well as MME/Direct X ones. Beyond that, you really need to think about what features you require, because there's a vast choice. How many inputs and outputs will you need? Do you need MIDI ports, or will you be using a USB MIDI keyboard? Do you want your input and output sockets to be at the rear of the computer itself, or in an external box? Will you just be dealing with line-level signals, or will you need preamps to input unamplified signals? Will you want to connect a turntable or DI an electric guitar?

As you can see, there are lots of decisions you need to make. Fortunately, there are numerous companies who specialise in making PCs especially for music production, and it would be well worth your while contacting some of them and discussing your requirements. Look at the adverts in SOS from the likes of Red Submarine, Millennium, Carillon, Digital Village, Inta Audio and Philip Rees.

When it comes to software, there's also a fair bit of choice. One of the cut-down versions of Steinberg Cubase like Cubase SL or SE would be fine to get you started, but you might find you get results sooner with Reason or a program like Sony Acid or Ableton Live. And yes, you can get software instruments that perform every conceivable function — probably a soft sampler such as Native Instruments' Kontakt , Steinberg's Halion or MOTU's Mach Five would be at the top of most dance producers' lists (but bear in mind that Reason doesn't support third-party plug-ins).

£1500 will certainly get you a well-specified PC and some software, and should probably cover the soundcard as well.