The Carillon PC is back, but how does it measure up in the modern computer market? 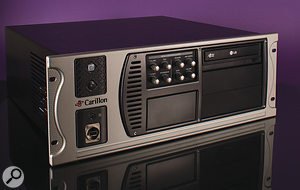 Years ago, PC users were almost universally looked down on by Mac‑based musicians. In my opinion, there were two key products that changed this situation. The first was the PC‑only Gigastudio application, which revolutionised sample streaming and made owning a PC acceptable. The second was the trail‑blazing rackmount case of the Carillon PC, which for the first time made owning a PC cool.

Way back in 2001 when I received the first ever Carillon PC to be sent out for review I was deeply impressed by the way it had been designed from the ground up for audio recording, and with the attention to detail that went into it. The range went on to become extremely popular with professional musicians and studios worldwide. Nearly 10 years on, the Carillon brand and those famous front panels have risen phoenix‑like from the ashes, thanks to new company Carillon Audio Systems Ltd (who have expertise from the original Carillon company on board).

While the Carillon AC1 now faces much stronger competition than it did in 2001, it's not just for rich kids and professionals — the new range starts at just £699 for those with more sense than money. For those who need plenty of 'grunt', however, the AC1 Core 4XT model under review here features Intel's long‑awaited Core i7 Extreme 980X 'Gulftown' processor with six cores each running at 3.33GHz. With hyperthreading enabled, this means this single CPU displays a massive 12 virtual cores inside the Windows Task Manager!

The iconic AC1 Carillon rackmount case is still a heavy and rugged beast compared with most other computer cases, but its comparatively shallow depth of around 16 inches (compared with the more typical dimension of over 20 inches) does make it easier to incorporate into touring and mobile rigs, where it has withstood the twin tests of time and roadies alike!

It's still essentially the same classic unit, with twin side‑mounted air intakes and no internal acoustic treatment, although I did spot a few minor changes from the original design. There are now two 80mm rear‑mounted cooling fans instead of one, to cope with the increased heat output of the latest processors, while the front-panel audio socket has been replaced by a USB socket. This is probably more handy to most musicians nowadays for plugging in a RAM stick, dongle or USB‑MIDI keyboard (there's a new range of Carillon keyboards coming out soon).

The review model was also fitted with one of the unique Carillon front‑panel options, the RK8 MIDI controller, which has eight rotary knobs that can be mapped to your choice of parameters inside most music applications. I suspect this option would be particularly handy for quick tweaks in a live context; alternative front-panel options include transport controls and a mic/instrument preamp.

Delving Into The Innards 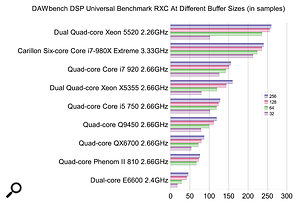 While it may not win the crown in raw power terms, this six‑core Core i7 Carillon machine beats all others at really low latency, where it often counts most!

The Gigabyte motherboard used here sports an X58 chip set, and is notable for its two USB 3 ports and beefy power supply for all USB devices — what little you lose in expansion possibilities with the smaller case you certainly make up for in external expansion potential. Three 2GB RAM sticks had been installed, leaving the remaining three slots for further expansion if required, and it was no surprise to find Windows 7 Professional 64‑bit had been installed as the operating system, as a 64‑bit operating system is necessary to access the full 6GB of system RAM.

A Seasonics PSU is always a reliable and quiet choice for an audio PC, as is the popular twin‑fan Noctua NHU9DX CPU cooler for Intel's new powerhouse 980X CPU, the latter accounting for around 40 percent of the total system price.

It was also good to see a fanless graphics card (the same ATI Radeon HD4350 model used in the DARC Ultimate LE PC reviewed in the March 2010 edition of SOS), although it has such a hefty heatsink it not only occupies a PCI x16 slot but also obscures the next one along. The review machine had also been fitted, at my request, with a Lynx Two soundcard. This has excellent drivers that let the machine performance shine through, and still left two PCI x8 slots and two PCIe x1 slots clear for further expansion if required.

The review machine had two hard drives — a 320GB WD Caviar Blue unit divided into 100GB System and 200GB Data partitions, and a 1TB Seagate Audio drive partitioned into two halves — and the wiring loom connecting everything together was neat and tidy. Overall, this machine exuded a quiet and solid professionalism, and I'm not surprised at the amount of interest generated by the Carillon brand re‑launch.

At the rear of the unit we find two 80mm fans and plenty of connections for some serious external expansion.

I'm pleased to report that even with one of the latest hex‑core processors, 6GB of RAM, two hard drives, and a grand total of five low‑rpm cooling fans, this Carillon PC was still relatively quiet in use. Of course, time has marched on, and its competitors (particularly those with internal acoustic treatment) now have the edge in this area; but as with any rackmount unit, acoustic noise levels will drop once the two side air intakes are buried within a rack.

As luck would have it I ended up stress testing on the hottest day in the UK so far in 2010, and the CPU core idle temperatures were already averaging a rather high 67 degrees Centigrade. However, they dropped significantly during my torture tests to a much safer 48 degrees, which generally indicates an over‑enthusiastic temperature‑controlled fan kicking into action. Since the subjective noise level didn't change at all during my tests, I suspect that the fan idle speeds could be increased without compromising noise levels, to keep idling temperatures somewhat lower.

SiSoftware's Sandra test suite measured a memory bandwidth of nearly 22GB/second, significantly greater than any other SOS review system to date and therefore promising excellent sample-streaming performance and maximum polyphony for those who need it.

However, it was the processor benchmarks that proved most impressive, and I can see the new six‑core CPUs becoming very popular for audio use. With a CPU Arithmetic score of 149 GIPS (Dhrystone) and 105 GFLOPS (Whetstone), and CPU Multimedia figures of 274 MPixels/s (Integer) and 204 MPixels/s (Float), this machine beats even the twin‑CPU Xeon quad‑core machine from DARC, with 16 virtual cores, by up to 20 percent. Not bad for a single processor, even if it does currently cost a bundle!

As always though, I turned to the DAWbench Universal benchmark test to give a more concrete indication of audio performance compared to other PCs, and the results were most illuminating. With a conservative 256‑sample buffer size (around 6ms latency at 44.1kHz) I managed to run 240 instances of the Reaxcomp plug‑in, which makes this six‑core 3.33GHz processor just eight percent slower than a dual-processor Xeon 5520 model with its eight cores running at 2.66GHz, but around 54 percent faster than the ubiquitous Core i7 920 quad‑core clocking at the same speed.

More importantly for those who want lots of power at incredibly low latency, the six‑core results hold up well all the way down to a miniscule buffer size of 32 samples (just like all the other members of the Core i3/i5/i7 family), whereas both the dual-Xeon machines in my chart conk out at 64 samples. In other words, while a dual‑Xeon PC may provide the edge in terms of raw power, a Core i7 always wins if you need to monitor with plug‑in effects at the lowest possible latency rather than relying on 'zero latency' hardware options.

Carillon's die‑cast rackmount front panel still retains that feel of rugged professionalism that has stood it in great stead for the last 10 years. There aren't many components in the PC hardware world that can be deemed instantly recognisable 'classics', but this is one of them.

While the Carillon AC1 range faces much stronger competition this time round, Carillon Audio Systems seem to have done an excellent job of re‑launching this iconic brand, and have also managed to keep their prices keen. Although it may have lost its crown of 'quietest production PC', it's nevertheless a quieter-than-normal, powerful and mightily rugged machine that will undoubtedly find its way into many studios and live rigs around the world. Welcome back, guys!

As always with a review of this type, the system described is only a snapshot of what's available across the entire range, and there are plenty of other Carillon processor, drive and RAM options available to suit various budgets and power requirements. Most potential purchasers will almost certainly want the Carillon case, but Carillon Audio Systems also offer more traditional tower systems with the same specifications but with internal acoustic treatment, which I suspect will be slightly quieter in operation, if this is important in your particular application.

Despite still being relatively new, the audio power offered by Intel's Core i7 980X hex‑core CPU has already resulted in great interest from other specialist companies, although as I finished this review there were only a couple of systems already available with this processor as an option. If you're particularly interested in the performance of this review system you should also take a look at machines such as the Scan 3XS SAX PowerDAW Extreme in the UK (http://3xs.scan.co.uk) and in the US, the Quad Xtreme range from ADK Pro Audio (www.adkproaudio.com), which even offers an option to overclock to 4GHz or more!

All Carillon Audio Systems computers are stress‑tested for 24 hours before dispatch and supported by lifetime free tech support via telephone and email — try getting that from your average mainstream PC supplier! Customers get a one-year Return To Base warranty, while most parts have a three‑year warranty. Carillon will also supply, install and test your choice of audio hardware and software for a true out-of-the-box experience.

The Carillon PC range has over the years been described as 'iconic' and 'rock‑solid reliable', and I can see little or nothing in this latest model to besmirch that reputation.