Despite the ubiquity of the SM57 for use on snare, there are other options — and Earthworks aim to help you capture a more natural sound.

Since the mid‑'90s, Earthworks have built a reputation for making very honest‑sounding small-diaphragm microphones for use on stage and in the studio. The latest addition to their range, and the subject of this review, is the DP series of 'drum periscope' cardioid mics: the DP25C, which is designed for close-miking snare drums; and the DP30C, for similar applications with tom-toms.

Earthworks say they make 'high‑definition' mics, which they claim offer a particularly fast and neutral response across a wide frequency range (the DP25C has a frequency response of 50Hz to 25kHz (±2dB), and the DP30C 30Hz to 30kHz (±1.5dB) — even when compared with other small-diaphragm condenser mics. Their argument is based on research into human hearing and into mic and loudspeaker design by Earthworks founder David Blackmer. He found that people can differentiate sounds only five microseconds apart, and that even though the upper threshold of human hearing is around 20kHz, the intermodulations and overtones caused by energy above that figure influence the overall quality of the sound we perceive.

Precisely how this is achieved is kept very much under wraps, but they've gone to the trouble of capturing impulse responses of different mics in order to back up their assertions — and although the theory hasn't become 'accepted wisdom' in the industry, it has not been disproved either.

One consequence of the circuitry is that many Earthworks mics, the DP series included, have an incredibly high output level (up to +26dBU, according to the technical specifications). It's for this reason that, rather than just being available individually — which, of course, they are — the DP-series mics are also sold with Earthworks' in-line attenuators (called LevelPads) in a number of drum-miking kits (the kits include different numbers of mics, along with a rim mount and LevelPad for each mic: for more detailed information about the kits, see the 'Pricing' box elsewhere in this article). The LevelPad comprises a simple, switchable pad, offering both 15dB and 30dB settings, and although some recording consoles will be able to cope with the input signals coming straight out of the mics, I found it more comfortable to use the LevelPads set at ‑15dB, whether using either of the two mixing consoles or the two stand‑alone mic preamps that I used during this review. 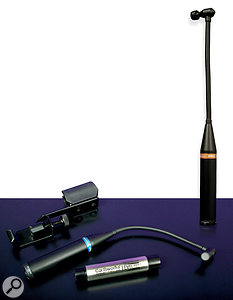 Once mounted (see the 'Engineering Precision' box), the mics behave very nicely indeed. Because of the precision of the gooseneck (it stays where you bend it!) and the physical size of the mic 'head', I found it very easy to experiment with the sound using mic placement. There are very few such systems that enable you to angle a snare mic in that no man's land between snare drum, hi‑hat and high tom with such ease and freedom: in my experience, there's usually a compromise, due both to the size and length of the mic in use, and to the layout of the drums themselves.

This is great from a convenience point of view, of course: being able to place the capsule out of the drummer's way is always a relief; but, more importantly, the changes in sound when I made even slight adjustments to the mics' angles, and positions relative to the drums were astonishing!

Whatever the theory about this Earthworks design, it certainly seems to work. These mics pick up the subtle nuances of the drum's sound — presumably because they're applying very little character of their own to the signal. The cardioid pattern of both the DP25C and DP30C is very tight across all frequencies in the 180‑degree hemisphere in front of the capsule, which means that any off-axis frequency-response anomalies across the spectrum are negligible. Also, the response of both mics to transients seemed to be extremely fast — and whether that's due simply to the small-diaphragm design, or the cicuitry described above, the result is an especially crisp, clean and tight sound that sounds, well... just like the thing at which you point it. Really, all that's needed to get a great sound with these mics — providing your drums are well tuned and well played — is a pair of closed‑back headphones and less than a minute of mic positioning on each drum. The relief of not having to weave mic stands between bass-drum spurs is almost spiritual!

Of course, the DP‑series mics do pick up spill from other drums, just as you'd expect from condenser mics in close proximity to a drum kit, but because of their off‑axis accuracy, 'spill' sounds don't sound trashy or nasty. In fact, the DP25C I'd placed on the snare picked up a really crisp and tight hi‑hat that sounded better than the close hi‑hat mic! Interestingly, I also found that the mics made setting noise gates on the toms trouble‑free — which is probably due to the close placement, and the related degree of separation.

From a sonic point of view, these mics are excellent, but there is a snag: they're very, very thirsty. According to the manuals, they require 10mA from the phantom‑power circuit, which does conform to standards, but only just... it is the maximum current draw allowed by the IEC phantom‑power standard (DIN EN 61938, clause 7.4). Prior to 1979, that standard was lower (7mA), and there's plenty of modern gear that won't adequately be able to meet the demand.

Why might this be an issue? Well, when plugged into a desk or preamp with a sub‑standard power supply, the result is very noticeable high transient peak distortion. Depending on the design of the +48V circuit, this effect can be multiplied with every additional high‑current mic you use, so I dare say that even reasonably capable phantom supplies may struggle to power all 11 mics of Earthworks' DFK1 kit used concurrently. For example, I tested the DP series alongside other Earthworks mics, and found that I had to draft in single‑channel preamps to power the snare and bass-drum mics, as the mics were struggling to reproduce some of the drum hits, despite their ability to accept SPLs of up to 145dB (and it was nowhere near that!).

Earthworks say that the reason for the thirst is the active circuitry, and that they thought it better to create something that can operate on phantom power within standards than to have to include a dedicated PSU with every mic. They have a point, but it's just as well to be aware of the power requirement if you're planning to use these mics with your existing setup.

If you're in a position to splash out thousands of poundsdollars on one of the Earthworks drum-mic kits, you've probably already spent money on a mixer or preamp with a powerful enough phantom supply, or even a dedicated phantom power supply. A good old automotive analogy is that Aston Martin still sell thousands of cars despite the price of the tyres, poor fuel economy and servicing costs. The fact remains that these mics are incredibly good — and so good, in fact, that I feel that I've been missing out with my comparably conventional drum‑miking setup. The quality does come at a premium, but for the studio that has everything and still wants more, this could just be the next must-have purchase.

The Shure Beta 98 and its siblings are perhaps the closest competition, but AKG and Sennheiser also make some capable drum mics. For a high‑quality, transparent sound you could also turn to brands such as Schoeps, DPA and Josephson... but their mics aren't built to withstand direct hits from drum sticks!

The Earthworks DP‑series mics have an unusual but very nicely crafted gooseneck capsule mount, and each model is supplied with a clamp that secures tightly onto the rim of a drum, allowing for versatile mic placement. Put simply, the microphone design, coupled with the rim mount, provides the most unobtrusive means of conventional close‑miking I've ever encountered on a drum kit. The Earthworks mic's 'head' is around one third the width of the business end of an SM57 and, at under an inch long, is incredibly manoeuvreable. Its gooseneck mount also enables almost limitless positioning options. Once set, the mic heads stay in place, even when the drums are played with vigour. Reassuringly, in the event that the drummer's stick chances upon part of the mic body, Earthworks say the housing is designed to withstand direct hits — although I don't think they would recommend making this a common practice! 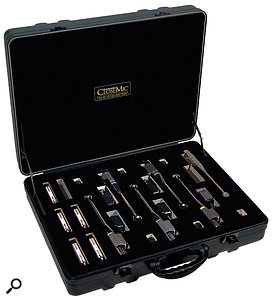 The Earthworks DP25C and DP30C are available individually, or in various kits with mounting and pad accessories. Prices include VAT.

The Earthworks DP25C and DP30C are available individually, or in various kits with mounting and pad accessories:

These mics have an entirely praiseworthy sound, with convenience and rugged build quality to match — but take the phantom-power requirements seriously if you are thinking of buying, especially at this price!