Q. What techniques will give me an authentic ’80s sound? Skip to main content

Q. What techniques will give me an authentic ’80s sound? 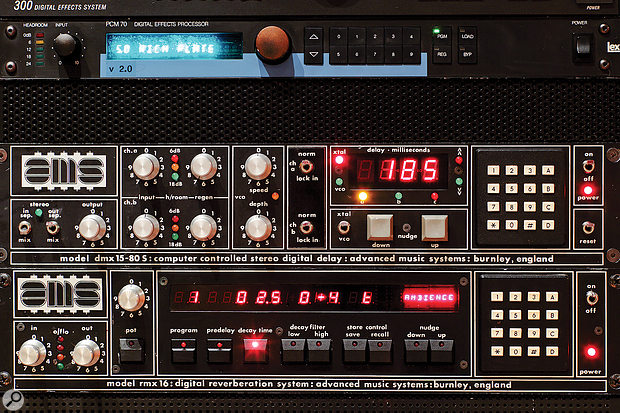 Much of a high–end studio’s equipment budget in the 1980s would have been spent on high–quality algorithmic reverberators and delays — pictured here are an AMS DMX 15-80 S delay unit (middle), the AMS RMX 16 reverb (bottom) and, just making it into the 80s, the Lexicon PCM70 reverb (top). But even high–end studios would try to make the most of their investments by using these as send effects that could be applied to many tracks at once.

I’m nearing the end of an ‘80s–style production, and I’ve got to the point at mixdown where I’d usually be thinking about sending everything through a couple of global reverbs/delays with a view to simulating a soundstage. But bearing in mind I want this to sound authentic, would this have actually been possible for a mix engineer in that decade? Or would this sort of treatment usually only occur at the insert level on a track–to–track basis?

SOS engineer/producer Mike Senior replies: Well, the first thing to point out is that the idea of having a few global delay/reverb effects applicable to all channels in a mix is as old as the hills. The main impetus for this was always that decent reverb generation was, until the advent of cheap mass–market computing, a pretty expensive business. Either you had to build a reverb chamber and put mics in it; or buy a large electromechanical reverb unit such as a reverb plate; or get one of the (at the time ferociously pricey) first–generation digital reverberators. Whichever choices they went for, studios simply didn’t have the financial resources to justify being able to run very many reverbs at once, so using each on several channels at once was a simple way of getting the most from the hardware investment.

That said, many of the productions that epitomise the ’80s were mixed in high–end studios that had serious budgets, and at the time much of that purchasing power was targeted at digital delays and reverberators because they were comparatively space–saving, low–noise, and extremely flexible sonically. (It should also be remembered that the ’80s was the era when mix recall and automation really took off, and digital effects were more predictable in terms of recreating a mix for later revisions.) Having a much wider palette of delay/reverb sounds inevitably led to an explosion in mixes with highly layered effects, so combining different reverbs is definitely something I associate with that period. However, the layering wasn’t just a question of creativity — it was also a response to the fact that many early reverb processors had to be so efficient (CPU cycles and RAM didn’t come cheap back then) that they simply didn’t sound very nice, especially with long decay times. Thus, many engineers got into the habit of sending to several reverbs for each instrument to increase the overall effect’s complexity, allowing smoother and more lush results. Other tricks included chaining delays and reverbs, or feeding some of your send effects into the others via the mixer’s sends.

My main advice would be this: use a wide variety of delays and reverbs, especially things which don’t sound that natural on their own, and try to make a virtue of it by layering them and feeding them into each other. (Be careful of feedback loops, though!) In particular, if you can find emulations and/or impulse responses for things like the Lexicon 224 or 480, AMS RMX 16, Yamaha SPX90, and Alesis Quadraverb, you should find plenty of ‘80s reminiscences in those! Remember also that many reverb processors in the ’80s were rather bright–sounding; current reverb plug–ins may actually benefit from some high–end boost in the effect–return channels to emulate this attribute. And don’t forget gated reverb — particularly of the algorithmic kind. While a few iconic ‘80s productions used real gated room sounds, these were followed by innumerable joining–the–band–wagon hits that relied much more heavily on canned gated reverb patches (such as those within those AMX or Yamaha hardware boxes) instead.