Stand Up! By Paul White

The humble speaker stand or desktop speaker platform can make a huge difference to the sound in your room.

Loudspeakers can be supported in a number of different ways, but many home–studio owners I meet seem confused about what effects, if any, this choice has on the final sound they hear emanating from their speakers. In this article, I’ll explain, in very simple terms, all you need to know about this, so you can either build or invest in a suitable means of mounting your own studio monitor speakers. 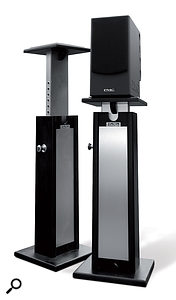 We tend to think of a loudspeaker as a fixed box that produces sound directly from the moving cones of the speakers (and, where the speaker is ported, from the port as well). Although that is certainly where most of the sound comes from, the reality is that no matter how rigid the cabinet is there will also be some vibration of the cabinet walls. Furthermore, in accordance with Newton’s third law of motion (each action has an equal and opposite reaction), whenever the speaker cone moves in one direction it will try to push the speaker cabinet the other way.

One of the roles of an effective speaker support is to prevent such vibrations from being transferred into other structures, such as wooden floors, desktops, shelves or mixer meterbridges. It should also hold the speaker as firmly as possible, to reduce movement due to the action/reaction effect. And, of course, it needs to put the speaker in the correct position relative to the listener, which usually means with the tweeter aimed at an imaginary point just behind the listener’s head. Note, though, that a few speakers are deliberately designed to be aimed directly ahead rather than at the listener, so always check the recommendations in the manual that comes with your particular loudspeaker before directing them inwards.

Whether you use stands or platforms depends on what else you have in your system: usually you’ll pick whichever makes it easiest to get your speakers into the right physical position without them being occluded by other equipment, such as computer screens.

You may have noticed that some speaker stands are fitted with spikes on the base, which help to make a rigid and stable contact with the floor. As long as the stands are both robust and stable, this strategy works well on solid floors, but you may find that it causes problems on wooden floors, due to vibrations from the speaker cabinet being transferred to the floor via the rigid stand and spikes. The floor will then act as the king of soundboards!

The heavier the stand, the less it will move, and with many hi–fi and pro–audio speaker stands (including many of the models made by Atacama, for example), it’s possible to fill the hollow support column with a heavy material to add mass and to damp resonances. This could be sand, shot or any other heavy but well–damped material. If you visit the various hi–fi forums you’ll find a number of conflicting views on what the best material to use is, but there’s often little to back up people’s claims, and I’d suggest that that way lies madness! Dry playground sand works just fine, and you can even leave it inside plastic bags if you wish to avoid things getting messy.

A cheap DIY option is to build a couple of towers by stacking concrete blocks or bricks. This low–cost approach really works — we’ve used it successfully on more than one Studio SOS visit — and because of the high mass, very little vibrational energy makes it through to the floor. Some people like the rugged appearance of bricks, but if it’s not to your taste you can always disguise them with cloth drapes, or even spray them gold if you like that kind of thing!

You could just plonk your speaker onto the top of your chosen stand, of course, but it’s best to have the speaker fixed to the stand in some way, because otherwise it can slide around. One popular and effective method is to place blobs of Blu–Tack under each corner; this acts as both a removable adhesive and as a damping medium. Another alternative is to use high–friction rubber matting, of the type sold for workshops and kitchens. 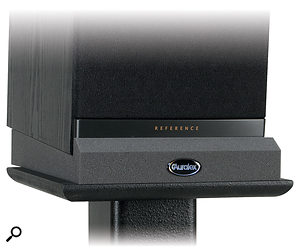 Foam decouplers such as the Auralex MoPad pictured here act as both a spring and a damper, and can prevent significant vibrations being transmitted from a speaker to your studio furniture.If you already have a speaker stand with spikes and your floor is made of wood, then you should consider putting some form of isolation platform between the speaker and the stand, to prevent the cabinet vibrations reaching the stand and, through it, the floor. Avoid flimsy stands that move or rock when you touch them. If the final assembly doesn’t feel completely solid, avoid it.

A speaker platform is designed primarily to provide a degree of mechanical isolation between the speaker and the surface upon which it is placed, while keeping the speaker firmly in place. This is particularly important when siting speakers on lightweight desks or shelves, as these can easily be set into vibration if in direct contact with a speaker cabinet. An isolation platform works in a similar way to a car’s suspension, and comprises three mechanical components: a spring, a mass supported by the spring, and some form of damping to prevent the sprung mass from continuing to bounce around. In a car you have the springs between the axles and the car body: the car body provides the mass and the shock absorbers provide the damping, to stop you having a bouncy ride. The theory is that the mass and spring characteristics are chosen so that the resonant frequency of the combination is well below that of any frequency they’re likely to be asked to isolate. For example, if the lowest note a speaker can reproduce is 30Hz, then the resonant frequency of the supporting platform needs to be well below that — perhaps just a few Hertz or less.

Fortunately, we don’t need to balance the speaker on actual springs, as a suitably dense piece of acoustic foam can act as both spring and damper. The speaker cabinet provides mass — so sitting a speaker cabinet directly onto a piece of foam, such as an Auralex MoPad, will bring about an improvement in the amount of vibrational energy getting through to the desk. However, foam isn’t particularly rigid, so the cabinet may still tend to move back and forth slightly as the speaker cones move, especially if the speaker cabinet isn’t particularly heavy. One way to improve the situation is to add mass by means of a platform fixed to the top surface of the foam. Primacoustic do this in their Recoil Stabilizer by using a very thick steel slab with rubber matting on top, while Auralex and other companies use MDF topped with dense rubber on their more up–market platforms. IsoAcoustics take yet a different approach, by using a frame made from rigid components joined by resilient isolators. Their smaller stands are made from a type of plastic and their larger ones from cast metal. All are perfectly valid approaches. Note that some speakers, such as certain Genelec models and Event’s Opals, already come with resilient isolating platforms or feet and so may not need additional treatment. 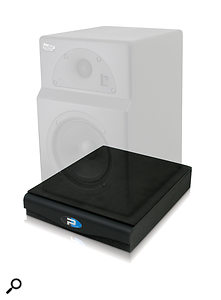 Foam speaker platforms can be improved upon by adding mass, as in Primacoustic’s Recoil Stabilizer. As that product’s name suggests, the mass helps to prevent the speaker cabinet moving back and forth in reaction to the movement of the speaker’s woofers.If you already have a pair of simple foam speaker platforms, you can improve their performance simply by gluing a heavy floor tile to the top. Ordinary contact adhesive works fine for this. Then you can either glue some kitchen mat to the upper surface, to provide some grip, or use Blu–Tack, as discussed earlier, between the tile and the loudspeaker. Even if you already have a loudspeaker stand, you can still use one of these foam–based speaker platforms on top of it to reduce the amount of vibration getting into the stand and subsequently into the floor. Many of the commercially available platforms come with additional foam wedges that may be used to adjust the vertical angle of the speaker if necessary.

Subwoofers can be placed directly onto solid floors, but an isolation platform of some type will help clean up the sound if that floor is made of wood or chipboard. It isn’t a good idea to position subs very far from the floor — up to about 150mm shouldn’t present a problem, but more than that and the reflections can start to cause issues. You should also avoid putting them into enclosed spaces, such as under desks with side panels, as this creates a resonant system that can further mess with bass clarity and evenness. Also be aware that you need to maintain a minimum distance between the cabinet and walls when positioning both rear–ported subwoofers and speakers. Details of how far this needs to be should be included in your speaker or sub’s manual. 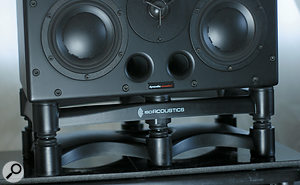 IsoAcoustics take yet another approach to decoupling — and the price-to-performance ratio of their products has impressed us.If the output from the sub seems uneven, you need to try and find a location where it produces a less lumpy response. A good tip for doing this is to temporarily place the sub where you normally sit to mix, and then listen at different places around the edges of the room while playing back a same level chromatic (semitone) scale of sine waves from a sampler until you find the spot that produce the most consistent level across all notes. That’s where you need to put the sub. If your sub has a phase adjustment knob, or a polarity–invert switch, adjust this until you hear the loudest result from frequencies around the crossover point, typically 80 to 120 Hz.

Where vibrations are allowed to leak into any studio furniture or wooden floors, the audible result is often a blurring of the bass and lower mid range, as well as a deterioration in the stereo image. By using an appropriate stand or platform, the bass end should tighten up to a very noticeable degree, leaving the mids sounding clearer and the imaging better defined. Of course, you do still need to attend to room reflections by adding some basic acoustic treatment — but that’s another subject and one that we have covered on numerous occasions in our Studio SOS series.

To sum up, the platforms with a heavy plate of some type on top are the most effective, though you can add mass very easily to any type of support by using floor tiles. Similarly, the more massive and better damped a speaker stand, the less vibrational energy is likely to make it through to the floor and less the stand itself will vibrate. Compared with the cost of speakers, adding suitable stands or platforms is relatively inexpensive, yet it can make a very worthwhile improvement to the overall sound quality!