Q. What’s the best way to organise samples and effects?

If I buy a sample library, I usually drop its contents into the 'Sample Library' folder on my hard drive, but that's ended up as rather a mess, and I don't know how best to organise it. Where should I start? 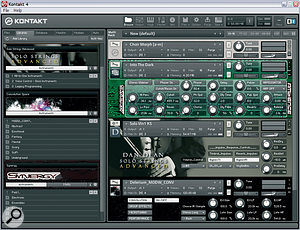 Even when the timing of a vocal double‑track matches that of the lead vocal quite closely, the two parts still won't actually have identical waveforms (as you can see here), so phase‑cancellation between them is rarely a problem in practice, unless you artificially tighten things up too far with audio editing or pitch‑correction tools.

PC Notes columnist Martin Walker replies: There are three main aspects of this subject to consider: location, performance and organisation. Let's discuss each one in turn.

First, given the large size of many of today's sample libraries, it makes sense to keep them all grouped together. However, don't dump them all in the same hard‑drive partition as your operating system and applications, as this partition will end up many tens of gigabytes in size, and then you're less likely to back it up regularly, which is asking for trouble. It's far safer to store sample libraries on a different partition or drive.

This approach can also help with the second aspect, performance. Even if your samples are loaded into RAM in their entirety, keeping them together on a well‑defragmented partition will minimise loading times compared with having them scattered all over the place among the OS and applications on a single huge drive. Moreover, many samplers now stream audio data in 'real time' from the hard drive, so storing them in one place avoids the drive read/write heads having to work harder darting about all over the place, potentially limiting the maximum polyphony you can achieve.

So musicians should ideally store all their sample libraries on one separate drive or partition, but if you need polyphony greater than a couple of hundred simultaneous voices, it's probably worth splitting them across two or more dedicated sample drives. This is particularly true if you're using huge orchestral sample libraries, since you can dedicate each drive to a different section of the orchestra, and they will share the streaming load, allowing greater polyphony overall.

When it comes to the organisation of your own personal sample collection, ultimately the most important aspect (as with any filing system) is that you can find what you're looking for as quickly and efficiently as possible, so you can continue the creative process rather than getting frustrated trying to track down a particular sound. How you do this is very much a personal thing, and also depends on how big your sample collection is. If, for instance, your music uses lots of individual drum hits, it makes sense to start with a folder named Drums, and within that create subfolders for Kicks, Snares, Hi‑hats, Toms, Cymbals, and so on, since this is the thought process you're likely to be having when you're searching for drum sounds. If this still leaves you with many dozens of samples within each subfolder (for instance), divide each existing folder into further sub‑categories, such as Acoustic/Electronic, Hard/Soft, Dry/WithFX and keep refining your scheme until you feel that each folder contains a manageable number of files. Similarly, instruments can be sorted by genre (rock, jazz, metal and so on), acoustic/electronic characteristic, or according to their timbre, while Drum Loops are probably best grouped in folders sorted by tempo, and then subdivided by genre.

Such a scheme of organisation should work well for standard sample libraries, but many of the modern ones intended for specific software samplers, such as Logic's EXS24, Gigastudio and NI's Kontakt are already highly organised by the developer into subfolders. I've reviewed such libraries, which contain hundreds or even thousands of individual files sorted into stereo/surround and high/low CPU versions, as well as sound categories. Here you're entering dangerous territory, since each preset may use several dozen associated samples, and impulse responses for added reverb. If you start shuffling files, you risk getting 'missing sample' error messages. With this type of library, I tend to leave well alone.

See the latest PC Notes column on page 150 of this issue for another idea to help you to navigate the sample and sound files on your hard drive.